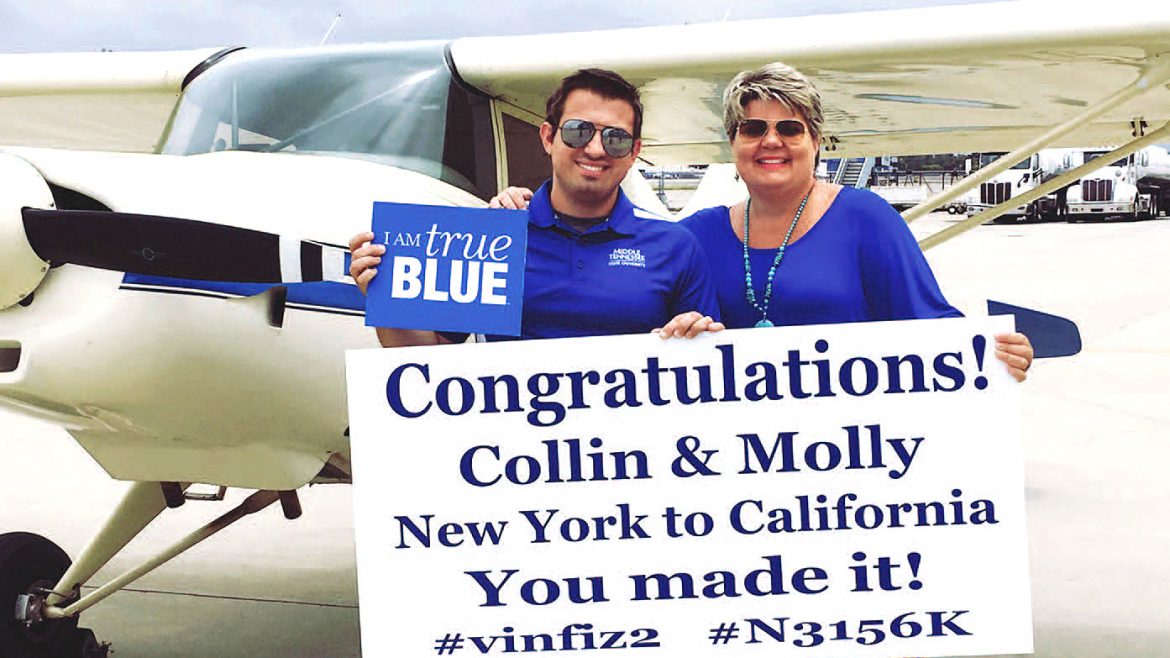 Remarkably, senior aerospace major Collin McDonald attended the first day of classes less than a week after suffering nearly 100 fractures in his face during a Jan. 11 plane crash.

McDonald, 23, was injured in the plane crash while returning home from a short flight to Lebanon, Tennessee. Molly, the 1995 Maule MX-7-160 he was flying, crashed on the airstrip beside his family’s farm in Carthage.

A very experienced pilot, McDonald received his pilot’s license at age 16 and has logged over 400 hours of flying time. The recipient of the Excellence in Aviation Award and other accolades, he retraced the first transcontinental flight made by Cal Rodgers over a century ago for his MTSU Honors thesis project last year. The 6,600-mile flight began May 19, 2016, when McDonald left Murfreesboro to fly to Long Island, New York, and ended in Long Beach, California, on June 11.

Following the crash, McDonald was taken to Vanderbilt University Medical Center via LifeFlight in stable condition. After initial treatment, he was sent home to allow the swelling to subside, then attended the first day of classes at MTSU six days later.

On Jan. 19, McDonald underwent surgery to correct his facial fractures and reportedly kept the medical staff in stitches. His mother, Lorrie McDonald, recalled that he joked with doctors assessing his injuries. Someone remarked that most accidents occur near home, and he immediately responded that the family should pick up and move. Six days after the surgery and two weeks after the crash, McDonald was released to drive.

Not one to let anything deter him — even a plane crash — he had completely caught up on his academic work, only missed two EMT courses he is attending in addition to a rigorous schedule, and continued to maintain one of the highest averages in his class within weeks of the accident.

McDonald’s propensity for exceeding every expectation by leaps and bounds is also shared by a brother, Connor, and sister, Delanie. The McDonald family is the first at MTSU with three siblings each receiving Buchanan Fellowships, the highest academic award given to incoming freshmen.

The unfortunate incident has not stalled McDonald’s plans in the slightest. Less than a month after the crash, he resumed duties as a flight instructor. When asked about any nervousness or apprehension about flying, he said, “I wouldn’t quit driving had I had a car accident. I will fly again.”

After graduation in May, he will continue to add ratings to his flight certificate and teaching. McDonald also plans to obtain a degree in theological studies and to become a missionary in developing nations to provide relief through aviation and ministry.

In 30 days’ time, McDonald managed to crash a beloved aircraft and return to his regular life with some sense of normalcy. According to his mom, that is exactly what one would expect of him.

Rodriguez is a graduate student studying Media and Communication.