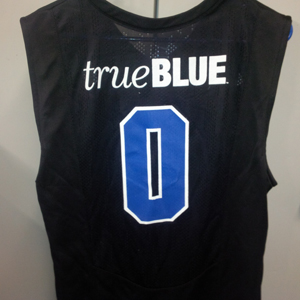 When the Blue Raiders men’s basketball team steps on the court at Murphy Center on Tuesday, they will be wearing special Blackout Game jerseys — and affirming their devotion to MTSU’s True Blue values.

Head Coach Kermit Davis said the players decided to replace their names on the special uniforms for Tuesday’s contest against Belmont with the words “True Blue.”

“At the beginning of the season, we talked about the values that we represent as a team and as a university,” Davis said. “The True Blue Pledge starts with the words, ‘I am True Blue.’

“When we began planning for Tuesday’s game, we felt these special jerseys could reflect how each one of us are striving to be True Blue on and off the court.”

The True Blue Pledge, which each freshman class recites as the beginning of the school year as part of Convocation exercises, reflect the university’s values of honesty and integrity, respect for diversity, engagement in the community and commitment to reason, not violence.

President Sidney A. McPhee said he was pleased that the team chose to honor the True Blue Pledge on the special uniforms.

“I know that Coach Davis and our team strives to bring meaning to these words with their work in the classroom and on the court,” McPhee said.

“When we say ‘I am True Blue,’ we are telling the world we are part of a larger Blue Raider community that values learning, growth and service.”

Tipoff for Tuesday’s game is set for 7 p.m. Ticket information can be found on GoBlueRaiders.com, the official website of MTSU Athletics.

You can find out more about the True Blue Pledge at www.mtsu.edu/trueblue.