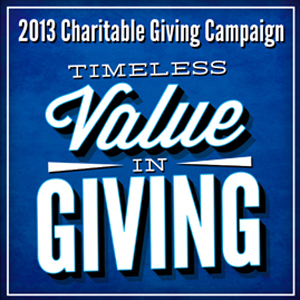 “Together we contributed more than ever before,” said Dr. Gloria Bonner, campaign chair and assistant to the president in the Office of Community Engagement and Support.

The campaign ran from Oct. 1 to Nov. 1, with employees designating their gifts to any charitable organization from a list of nine independent charities and three federated charitable organizations, including Community Health Charities, Community Shares and local United Ways. Various prizes and giveaways were awarded throughout the campaign to participating employees.

The 2013 Provost’s Cup was awarded to the Jennings A. Jones College of Business. In its second year, the Provost Cup Challenge recognizes the academic college that has the highest percentage of giving.

With 73 percent of employees giving, the College of Business came in well ahead of the nearest challenger, Provost Brad Bartel said. Last year’s winner was the College of Basic and Applied Sciences.

“You guys took it to amazing limits,” Bartel said in presenting the award to Dr. David Urban, dean of the Jones College.

“We wouldn’t have even come close to winning this cup if it hadn’t been for Sandy’s tremendous leadership and David’s support,” Urban said.

Bonner noted that the Division of Marketing and Communications won the President’s Challenge with 92.6 percent giving, while giving special acknowledgment to the Information Technology Division “for their outstanding efforts” to go above and beyond in encouraging employee participation.

“Most importantly, thanks to each member of the MTSU True Blue family for helping ensure that vital area services continue to be available to those who need them on a regular basis,” Bonner said. “Thanks for giving!”