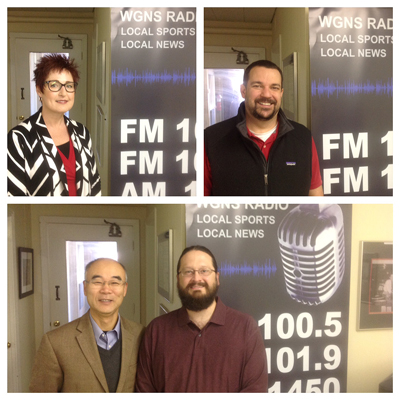 MTSU faculty and staff took to the radio recently to discuss an upcoming literary festival on campus, the opening of a new Chinese music center and a study abroad trip to Cuba.

The details were shared during the March 21 “Action Line” program with host Bart Walker. The live program was broadcast on FM 100.5, 101.9 and AM 1450 from the WGNS studio in downtown Murfreesboro. If you missed it, you can listen to a podcast of the show here.

The event will feature writing workshops, readings and master classes for students, as well as special guests Ann Patchett and Minton Sparks in free public appearances.

The Southern Literary Festival is an organization of Southern colleges and schools founded in 1937 at Mississippi’s Blue Mountain College to promote Southern literature.

Each year a different university hosts the festival, which is an undergraduate writing conference for a wide variety of genres, including fiction, poetry, playwriting and nonfiction.

• Guanping “Ping” Zheng, director of the MTSU Confucius Institute, and Mike Novak, assistant director, discussed the recent opening of the MTSU Center for Chinese Music and Culture on Bell Street.

The March 17 grand opening unveiled the first and only center of its kind in North America. Located on the first floor of the multipurpose Miller Education Center at 503 Bell St., the 3,200-square-foot center will see a library, an archive, classrooms and a musical instrument gallery.

The gallery includes some rare Chinese instruments, including various mouth organs, the ancestors of the Western harmonica and reed organ. Also included is the first set of bronze chime bells built as a replica of those discovered in the tomb of the Marquis Yi of the Chinese state of Zeng. The originals date back to 433 BCE (Before the Common Era).

The center was made possible with an initial $1 million grant from Hanban Confucius Institute in Beijing. Read the full story here.

• Dr. Jim Chaney, lecturer in the Global Studies and Human Geography program and co-director of the MTSU Signature Program in Cuba, discussed the MTSU study abroad trip to Cuba in late 2015.

Until recently, Cuba was practically off limits to most U.S. citizens, but that has changed with the Obama administration’s decision in 2014 to reestablish bilateral relations between the two nations.

Chaney and Dr. Steve Morris, political science professor, took a group of MTSU students to the island in order to experience firsthand a country in transition. This was a co-taught course between Global Studies and the Department of Political Science and International Studies and is representative of the 32 MTSU Signature Education Abroad programs offered at MTSU this year.