‘MTSU On the Record’ recalls p..

MTSU Police has joined hundreds of law enforcement and emergency personnel from throughout Rutherford County to take part in a first-ever comprehensive training program to better coordinate response to major incidents and active threats in the county.

MTSU Police Capt. Jeff Martinez, a U.S. Army veteran, is among a group of instructors who is helping train roughly 1,200 emergency personnel by the end of the year made up of law enforcement, fire and EMS personnel representing Rutherford County, Murfreesboro, Smyrna, La Vergne, Eagleville, MTSU and Motlow State Community College. 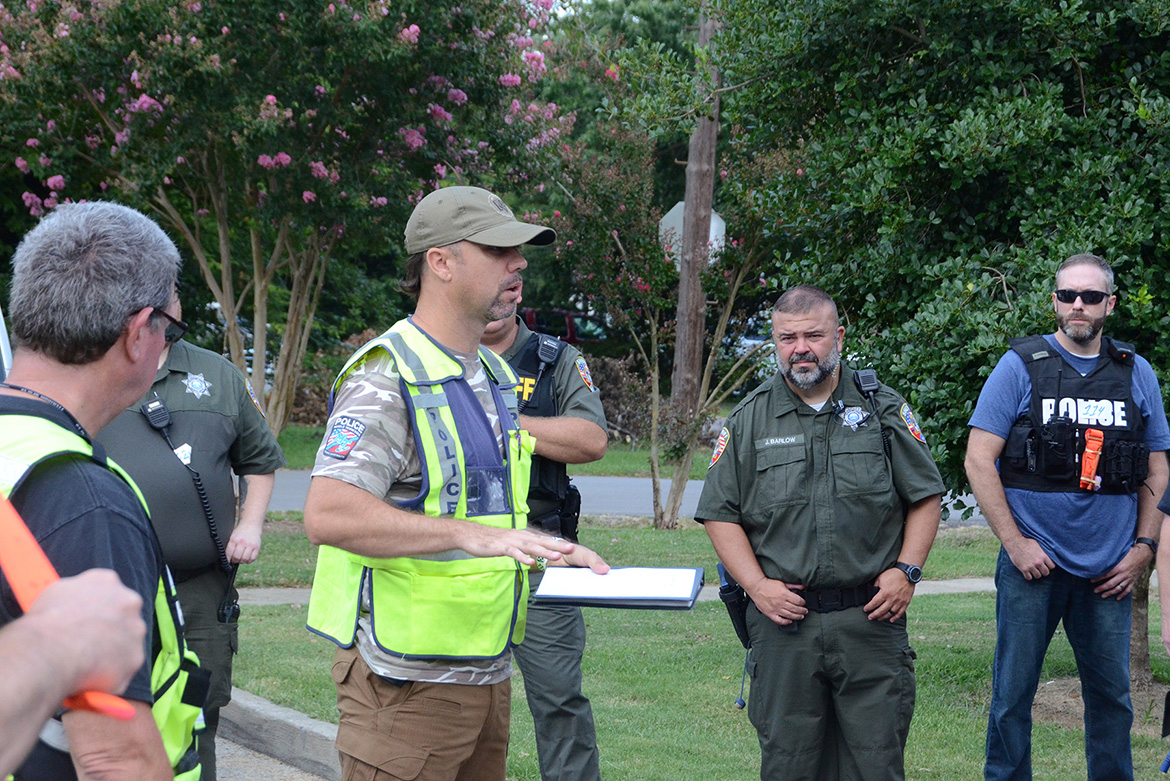 MTSU Police Capt. Jeff Martinez, center left, debriefs a group of about 30 emergency responders from throughout Rutherford County following a training session scenario at MTSU held in early August as part of a comprehensive course to train more than 1,200 emergency responders on better coordination across the county by the end of the year. Martinez is among the instructors teaching the courses. (MTSU photo by Jimmy Hart)

“The more we see each other and work together, the faster we’re going to respond to the real thing. Because if something happens, it affects everybody,” said Martinez, whose colleagues, MTSU Police Lt. Jon Leverette and Lt. Jacob Wagner, are also instructors.

“In Rutherford County, we have the great benefit of having a lot of resources at hand. The communication and networking between the agencies is critical,” Martinez said. 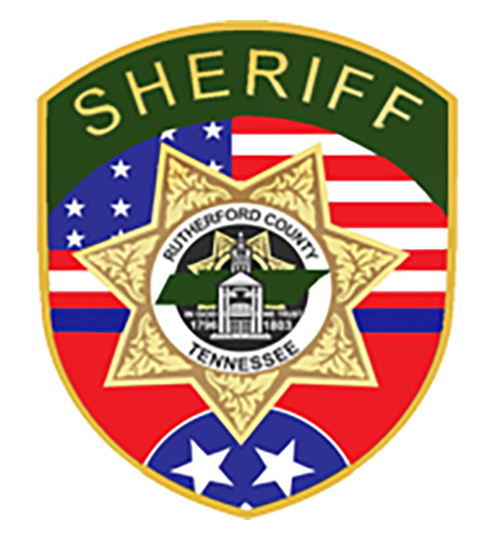 Called the Active Threat Integrated Response Course, the program is the brainchild of Lt. Chris Kauffman, training coordinator of the Rutherford County Sheriff’s Office and commander of the department’s SWAT team. A key element of the training is having responding police officers working from a staging area in coordination with other emergency personnel to establish protocols, radio communications and develop a plan of action surrounding an active threat.

Kauffman said the training, which started in the spring, is built around “the rescue task force concept,” a strategy developed several years ago that is designed to get emergency medical personnel to where injured victims are located “to try to render aid as quickly as possible to save as many lives as we can.” 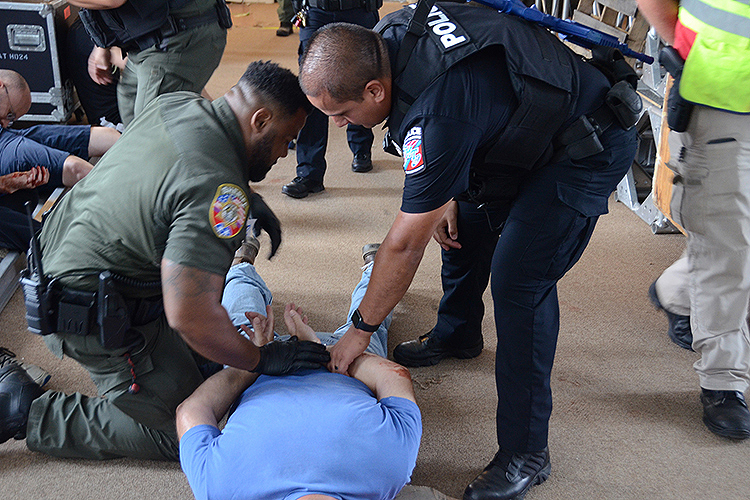 MTSU Police Cpl. Ricky Morales, right, and Rutherford County Sheriff’s Deputy Trey Mosby check on a “wounded victim” play-actor as part of a training session scenario held in early August inside MTSU’s College Heights Building as part of a comprehensive course to train more than 1,200 emergency responders across the county by the end of the year. (MTSU photo by Jimmy Hart)

Thus far, the training sessions “have been phenomenal,” he said, with about half of the county’s emergency response personnel having gone through a training session, which are held over multiple days at locations such as MTSU and World Outreach Church. Classes usually consists of between 30 and 50 trainees, some with decades of experience, others with only a few years or even less.

“All the agencies have bought in, all the chiefs have bought in, and this is a project we’ve been working on for over a year and a half to get started,” Kauffman said. “MTSU Police and the campus have been great by providing us resources, places to train and hold classroom sessions and allow their people to be here with us to teach and train.”

Martinez was among the group of instructors on hand earlier this month helping guide training for about 35 personnel from across the county through various emergency scenarios at the university’s College Heights Building off East Main Street.

Some of the role players for the sessions include MTSU students from areas such as Raider Student Patrol, Information Technology, Criminal Justice Department and Theatre who play shooting victims needing emergency medical care or even suspected assailants. Scenarios include a gunman who could be injured or even hiding somewhere in the immediate area.

Trainees are taught concepts such as the importance of establishing a “room boss.” That police officer has to take command of the immediate area where injured victims are located and direct other officers to properly secure the area, check for weapons and assess victims’ injuries before coordinating entry of medical personnel.

“That’s probably the hardest part,” Martinez said. “It may only be a few minutes … but it feels like an eternity.”

Martinez said police officers benefit greatly from training with fire and EMS personnel and have received more medical training through the classes on techniques such as properly applying tourniquets to injured limbs. 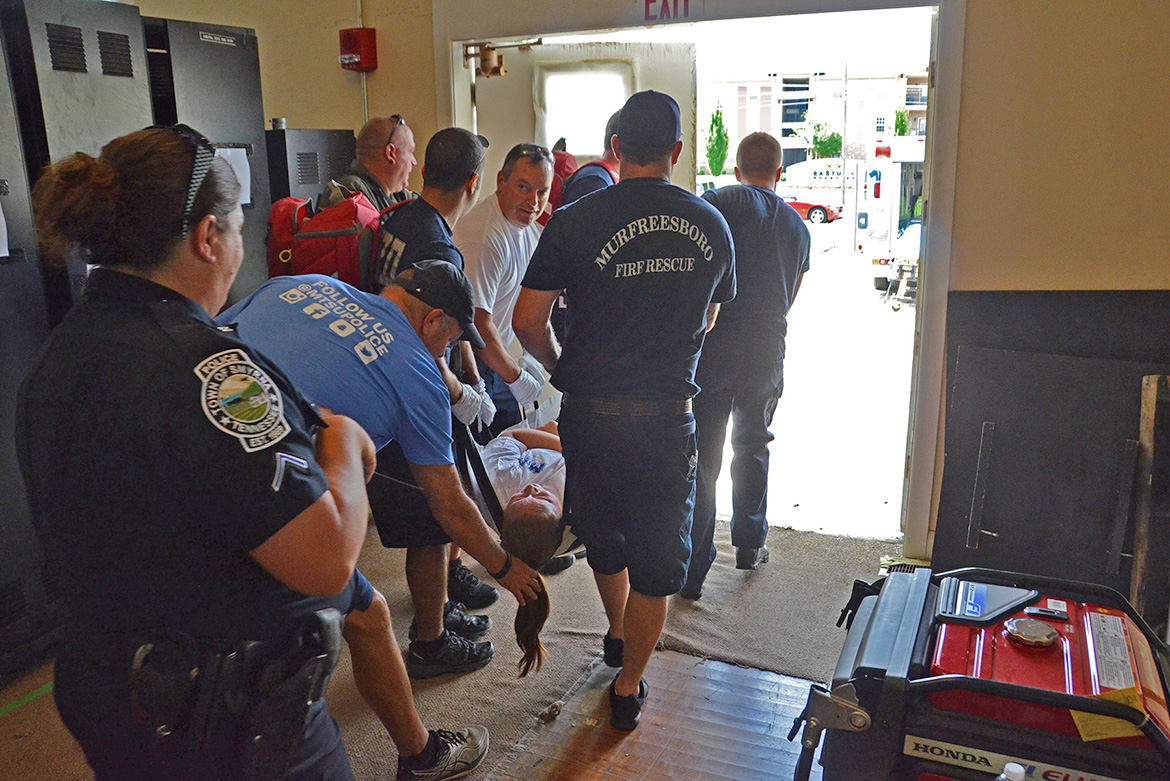 Emergency responders representing a variety of Rutherford County agencies work together to extract a “victim” play-actor to an awaiting ambulance as part of a training scenario held in early August inside MTSU’s College Heights Building. The training is part of a comprehensive program that began in the spring to train more than 1,200 emergency responders across the county by the end of the year. (MTSU photo by Jimmy Hart)

“We’re asking law enforcement to act in a capacity that they’re not used to — not only neutralizing a threat, but also providing safety and security for others as we go in to exact life-saving measures,” Hooker said, adding that firefighters are also facing similar unfamiliarity. “Extraction teams go in and provide immediate medical care and extract patients to more definitive care.”

After a scenario ends, instructors gather to share observations, pointing out specific strengths and weaknesses of the responding trainees and then sharing those observations with the group before the next scenario unfolds. Martinez said the goal is to build the confidence of trainees throughout the course of the training sessions.

“Our police officers understand how vital it is that the first responders in this area work hand-in-hand to provide the best response and assistance for members of our communities including, of course, our campus community. This particular training is one of the first steps to make sure the response and service all of our first responders provide continues to get better,” he said.

Course organizers say hey emergency personnel plan to conduct a tabletop exercise in early 2020 followed by a full scale exercise in the spring involving agencies from throughout the county. 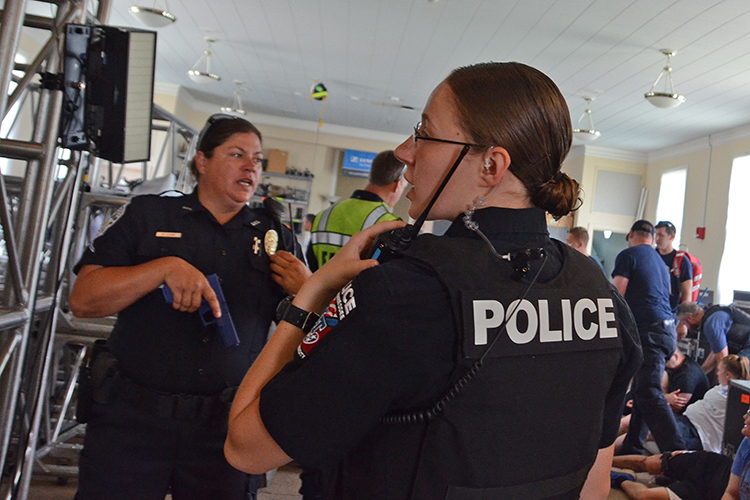 MTSU Police Officer Katelyn Adams, foreground, gives radio instructions as part of a training session scenario held in early August inside MTSU’s College Heights Building as part of a comprehensive course to train more than 1,200 emergency responders across the county by the end of the year. Adams was the designated “room boss” in the scenario, meaning the scene was under her command. (MTSU photo by Jimmy Hart) 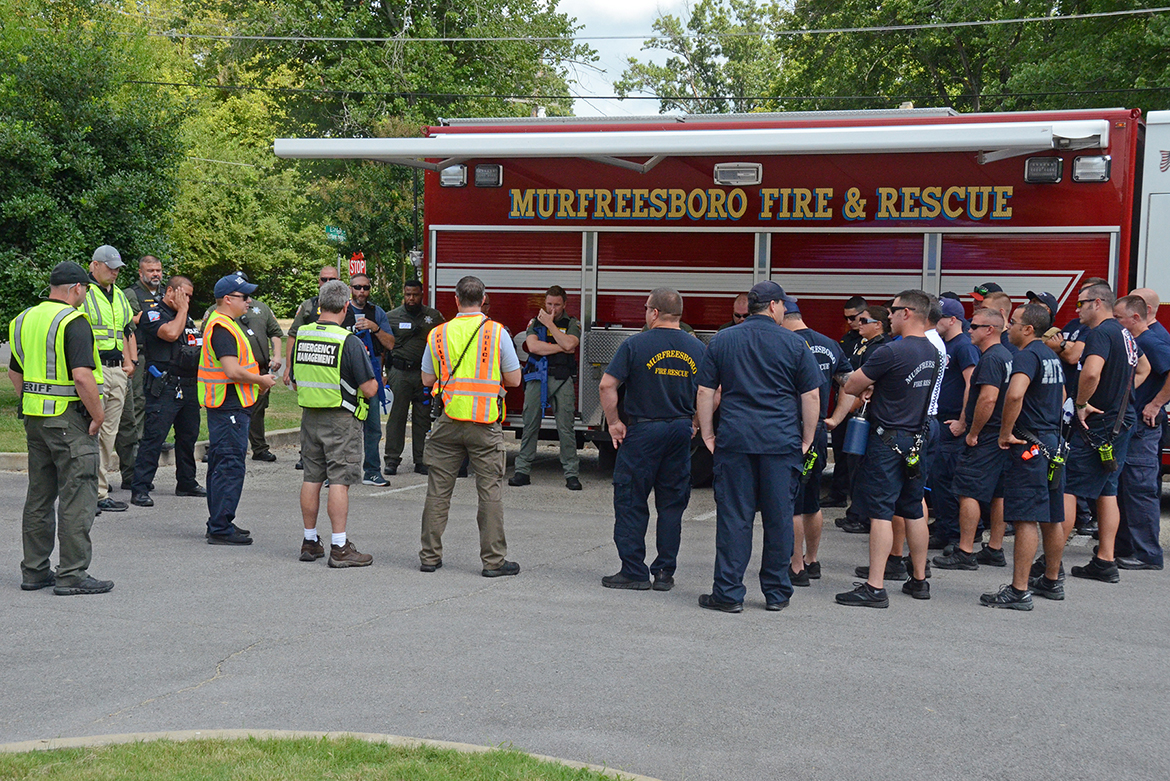