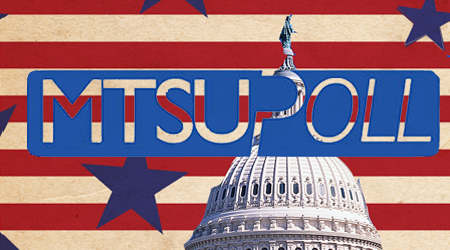 Republicans and Democrats agree on at least one thing in Tennessee: The stalemate in Washington probably will continue after the 2012 election.

Nearly half (47 percent) of the state’s likely voters think a stalemate between Democrats and Republicans in Washington is likelier after the election than cooperation between the two political parties.

Only a fourth or so (28 percent) think the two parties will cooperate, and another fourth (24 percent) don’t know which is likelier.

The rest give no answer, according to the fall poll by Middle Tennessee State University.

“Attitudes may soften at least temporarily after the election, when talk tends to turn toward unity and bipartisanship,” said Dr. Ken Blake, director of the MTSU Poll. “But going into the election, relatively few Tennessee voters think Republicans and Democrats will be willing to negotiate once the ballots are counted.”

Predictions of a stalemate prevail regardless of party affiliation. Over half (53 percent) of Democrats predict a stalemate, but so do a statistically identical 46 percent of independents and 46 percent of Republicans.  Within each political group, those who foresee a stalemate outnumber those who don’t.

Aside from the obvious tendency of voters to consider their preferred candidate more honest than the other candidate, the biggest factor behind these assessments seems to be which national television news outlet one watches most often.

Frequent Fox News viewers overwhelmingly (83 percent) consider Romney the more honest candidate. But Obama is seen as more honest by a majority (64 percent) of MSNBC viewers and pluralities of those who watch CNN (47 percent) and ABC (44 percent). Viewers of NBC and CBS have relatively mixed views about who is most honest.

About the MTSU Poll

Conducted by telephone Oct. 16-21, 2012, by Issues and Answers Network Inc., the poll completed 650 interviews with randomly selected registered voters in Tennessee. The poll has an error margin of plus or minus four percentage points at the 95 percent level of confidence.

Interviews averaged 12 minutes in length. Weights were applied to the data to match the sample’s gender and race proportions to those seen in exit poll data from the 2008 election in Tennessee. However, a comparison of results with and without the weights showed little difference.

The poll defined “likely voters” as registered voters who had voted already or who had either voted in the 2010 governor’s race in Tennessee and/or described themselves as “very likely” to cast a vote in the upcoming presidential election.

The results reported are for the 609 poll respondents who met the likely voter criteria.

All poll results are available on the MTSU Poll website, www.mtsusurveygroup.org.