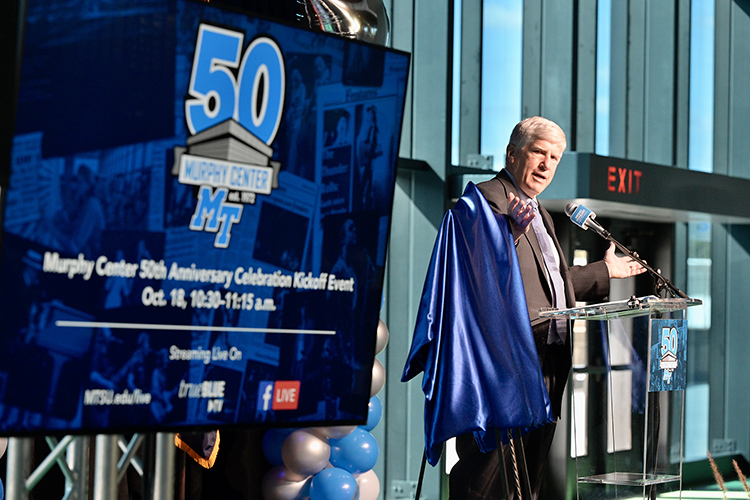 From die-hard Blue Raider hoops fans to new graduates to concertgoers through the years, “The Glass House” of Murphy Center is clearly beloved both inside and outside of Middle Tennessee State University for the many unforgettable memories made over its five decades of service.

To celebrate the 50th anniversary of the iconic structure perched along Middle Tennessee Boulevard, MTSU President Sidney A. McPhee was joined Tuesday on the building’s track concourse by Blue Raiders Athletics coaches and administrators and a host of fans and supporters to kick off a yearlong celebration of the milestone — including a recent $6 million renovation to modernize the facility for the next 50 years.

Highlighting the kickoff was a showcase of the new 33,000 square feet of “smart window” dynamic glass panels that replaced outdated predecessors and now give the 11,500-seat arena a glistening new exterior.

Manufactured by the international company SageGlass, the panels automatically tint and clear in response to the sun, eliminating the glare and heat challenges inside Murphy over the years and ensuring that the interior of the building is cool and comfortable for fans and student-athletes.

“This special place, The Glass House, is indeed quite a building. But it is so much more than that,” McPhee said. “It has been said that we often erect buildings not only to hold things and people but also to reflect who we are — and what we value. And when structures like Murphy Center transcend the purpose of mere shelter or storage, they become essential.”

The roughly two-year glass replacement project, from design to installation, required 16 semi-trailers to deliver the 1,300 pieces of SageGlass to be installed. Murphy Center now marks the largest installation of dynamic glass in higher education in the United States.

McPhee also unveiled samples of 17 large timeline panels, featuring vintage MTSU photos, that will be installed around Murphy Center’s concourse track to provide fans with a self-guided nostalgic look back on the five decades of Murphy Center’s history.

“Indeed, this place is perhaps the most important, and the most meaningful, place on our campus. For it is here where so many memories were created, and where we celebrated events, happenings, ceremonies and activities that became milestones in the lives of many,” McPhee added.

Elvis was in the building

Opened in December 1972 and affectionately known as “The Glass House” for its unmistakable four walls of glass exterior, the Charles M. “Bubber” Murphy Athletic Center has served as a campus anchor as home to MTSU men’s and women’s basketball, as well as the venue of choice for countless university and high school graduation ceremonies, concerts, state basketball championships and other special events.

During its concert heyday, Murphy Center hosted five Elvis performances; music icons such as Elton John, The Who, Stevie Wonder, the Beach Boys, Johnny Cash, the Eagles, the Judds, and many other acts performed there as well, including, more recently, native son and country music star Chris Young.

Arning said that Smotherman pointed to the decision by previous university leadership to strategically locate Murphy Center at a major intersection on a boundary of the campus, rather than deeper into the campus interior.

“The city then embraced it. It was their arena, it wasn’t just ours, and it belonged to Murfreesboro and Rutherford County,” Arning said.

As part of Tuesday’s kickoff, MTSU Athletics also touted a newly designed basketball court and showed off retro uniforms that will be worn by the Blue Raiders men’s basketball team during a special anniversary game on Dec. 15 against the University of Tennessee-Chattanooga.

And there’s more improvement to come, as MTSU Athletics officials discussed future upgrades to Murphy Center that include a dedicated primary arena entrance and a new main lobby — part of the overall “Build Blue” capital campaign to raise $100 million-plus to upgrade the university’s athletic facilities.

“I don’t think it can be overstated, the importance of the building to the cultural identity of many Tennesseans throughout the state,” said MTSU Director of Athletics Chris Massaro, reminding the audience of the building’s longevity by referencing the 1972 opening of Riverdale and Oakland high schools, when gas was 36 cents per gallon and Richard Nixon was president.

In between, he said, has been a host of great coaches, players, fans and supporters.

“There’s been greatness in this building the last 50 years, there’s no denying that. … The next step is to remodel, modernize and make her even more fan-friendly for the next 50 years,” he said.

With senior All-Conference USA player Courtney Whitson joining him on stage, Insell, also an MTSU alumnus, emphasized just how special it is for his women’s teams to play in the Murphy Center atmosphere and for him to roam the sidelines as head coach.

“Every morning I walk across that floor, and I thank the good Lord for two things. One, that I was selected to be the women’s basketball coach … and No. 2 is that I get to coach in The Glass House,” said Insell, noting that not only did he receive his university degree on the floor of Murphy Center, so did his three sons.

Men’s basketball coach Nick McDevitt brought up sophomore player and team captain Justin Bufford, who donned a retro uniform that will be worn during the Dec. 15 anniversary game against UTC. On the back of the jersey was the number “72,” marking the venue’s opening year, and the name “Earle,” a reference to then-head coach Jimmy Earle.

“Our team is really excited to run up that tunnel this season for the 50-year anniversary of this facility,” McDevitt said, adding that the men are riding a 17-game home winning streak that has stretched over the last two seasons. “We’re looking forward to making more memories this season.”

Massaro and the coaches praised the SageGlass smart windows, which can block or dim the sun at the touch of a computer button on hot days and harness its heat on cool days.

Bill Waits, assistant vice president for MTSU Campus Planning, said many of the facility’s previous glass panels were having problems with cracking and condensation after decades of use. Using SageGlass allowed the university to remove the window blinds and sheets of black vinyl that had been used to counteract the sunshine that at times affected the players on the floor.

“We’re really as proud of The Glass House as you are,” said DJ Damberger, vice president and general manager of SageGlass, emphasizing the energy savings and sustainability improvements that will be gained through the new glass panels.

“I’m excited to take this moment back to the plant, and to the people that went in and did all the work to create this, and share in this celebration with you.”