by Drew Ruble and Connie Huddleston 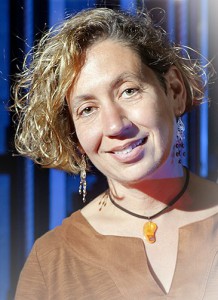 Claudia Barnett says her playwriting career started when she submitted a one-act play to a little theater in Michigan “and then forgot about it.” A few months later, the theater tracked her down, seeking permission to produce the play. She drove to Kalamazoo, saw the production (which she described as “wonderful”), and was especially struck when one female audience member told her after the play that all young girls should see it. Inspired, Barnett sent the play to Dramatics, a magazine for younger audiences, which published it.

Barnett’s ascent in playwriting has continued from that point on. An MTSU English professor, she writes about missing women, women who kill, and women who are silenced. In September 2011, based on only the first two scenes of her play Witches Vanish, she was chosen for the Downstage Left Playwright Residency at Chicago’s Stage Left Theatre.

At the time, she’d written only 20 pages. She traveled to Chicago six times during the year to complete the first draft, working with her director and five actresses. The characters are Macbeth’s witches, who explore the stories of women who disappear. The witches travel from the Spanish Inquisition to the Soviet gulag to Juarez, Mexico. The play had a workshop production as part of Stage Left’s LeapFest in May and June.

As playwright-in-residence at Tennessee Repertory Theatre in 2009– 2010, she experimented with poetry, madness, and time in her fulllength play No. 731 Degraw-street, Brooklyn; or, Emily Dickinson’s Sister.

In 2012, she attended a conference in Spain to present a staged reading of He Killed My Bird; or, Now that We’re in Heaven, a one-act play inspired by her Honors sophomore literature course, Women Who Kill, which covers Medea and Macbeth; 20th-century examples, Machinal and The Little Foxes; and all the way to contemporary plays by Carson Kreitzer, Rebecca Gilman, and Suzan-Lori Parks. “You’d be amazed at how many plays by contemporary American women are about women who kill,” she says. Her latest published work is I Love You Terribly, a book of six short plays.

Barnett lives in a log cabin outside Murfreesboro, surrounded by a few acres of trees—a place that she says feeds her creativity. Originally from a bustling city in New York, she says she loves silence, fresh air, and the deer in her yard. She gets her best writing ideas while yanking out weeds.

Barnett first joined the MTSU faculty in 1994 after completing her Ph.D. at Ohio State University. She has been instrumental in developing the Visiting Artist Seminar on campus, and she has brought many excellent guests to MTSU, including actress/playwright Heather Raffo, filmmaker Jesse Epstein, and songwriter Nathan Bell. As a teacher, she is especially proud of one of her former students, Margaret Hoffman.

Both Barnett and Hoffman had plays produced by Independent Actors Theatre in Columbia, Missouri, in March. Engaging with her craft, Barnett can’t help but pass her enthusiasm and love of writing to her students.