Dec. 1 is deadline for incomin.. 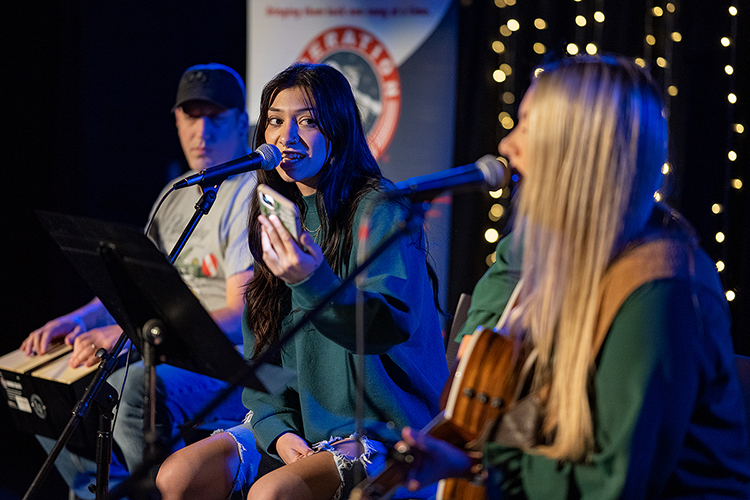 Once, or maybe several times, they were in the room where it happened. Perhaps it was a courtyard instead, or a street, or a playground, or a shop, or a parking lot, years ago.

Some of them haven’t left that room, or that playground, or that street, until a couple of weeks before Veterans Day, when they went into another room, this time with two smiling strangers, talking of music and telling stories … and the door finally opened.

Middle Tennessee State University’s collaboration with Operation Song and the Nashville Songwriters Hall of Fame, which began in 2016, recently brought together another group of military veterans whose stories need — and deserve — to be told, again with the help of professional songwriters and students in MTSU’s Commercial Songwriting Program.

Seven trios sat down together again for a day, talking about families, friends, work and faith, joking through awkward moments and waiting quietly for sudden tears, provoked by a random thought, to dry.

“It’s hard to think, in the morning, whether you even have a story to tell, and at the end of the day you think, ‘Wow, this is a song? That we’re going to perform?!?’” Operation Song Executive Director Mike Byer said with a chuckle during the “grand finale” performances in the Keathley University Center.

“You have these thoughts that you’ve shared from your story, and these folks help you craft your story into a new version that’s something … well, amazing. Every one of y’all today should be proud.”

The Hall of Fame, which works closely with Operation Song, first contacted MTSU’s Commercial Songwriting Program director Odie Blackmon in the Department of Recording Industry in 2016 about starting an event with the university.

The university’s Charlie and Hazel Daniels Veterans and Military Family Center helped contact and encourage local veterans’ participation, which has expanded to include military spouses, parents and even children to share service perspectives.

John Duncan, an MTSU history alumnus and Rutherford County teacher who’s working toward his master’s degree in educational leadership, explained the origins of his song “Face My Fear,” a story peeling back the origins of his physical and emotional cautiousness and how he’s worked to overcome it.

More than military veterans can identify with their lyrics’ multiple meanings: “I used to wear a suit of armor just in case I’m attacked / ’cause you never know when someone’s gonna stab you in the back.”

“I come from a military family but never planned on going into the military myself,” said Duncan, a U.S. Army veteran who served in Afghanistan. “I often talked about the experience of how it (military life) affected my family and my parents, and then I wound up doing it. I kinda charged ahead with it, but it forged me into who I am today.”

‘All these guys are awesome’

The music-focused student writers, all senior commercial songwriting majors, will receive credit for their songwriting practicum course, another in the program’s series of experiential learning classes that allow them to work with music industry mentors and co-write with pros.

“I had a great time writing this song,” Katherine “Katt” Grimes, a native of Lithia, Florida, who now lives in Murfreesboro, said succinctly as her peers nodded in agreement.

“All these guys are awesome.”

Grimes wrote “Roots” with Jeremy Barker, a Murfreesboro junior majoring in unmanned aircraft systems operations, and Kaitlyn Kilian, an Oklahoma songwriter new to MTSU this year. Barker’s participation in the 2021 Operation Song event told the story of all the near-misses in his life, and the one that connected, in “Late to the Party.”

This year, the “near-miss” made it in time again, after Barker asked his fellow students and the songwriters if his trio’s performance could be delayed until his wife, biostatistics graduate student Megan Roberts, arrived to hear the song.

They happily complied, with plenty of teasing, by taking group photographs and telling stories until Rogers rushed into the theater, all smiles, to thunderous applause from the small but vocal crowd.

• Student veteran Jay Magruder, a senior UAS major from Murfreesboro; student songwriter Jaren Logan from Memphis; and pro Mark Irwin, a returnee and writer for artists including Alan Jackson and Tim McGraw, who together wrote a tribute to the nation’s “Honor Guard,” in which Magruder served.

Operation Song is celebrating its 10th anniversary Monday, Dec. 5, with a special three-hour music showcase at the Franklin Theatre, 400 Main St. in Franklin, Tennessee. For more information about that event and about Operation Song, visit www.operationsong.org.

For more information on the Daniels Veterans and Military Family Center at MTSU, visit www.mtsu.edu/military.