MTSU will ring once again with the rhythms of Tejano music in Tennessee Monday, Feb. 25, when conjunto masters Felipe Pérez y Sus Polkeros bring their talents to a free public concert. 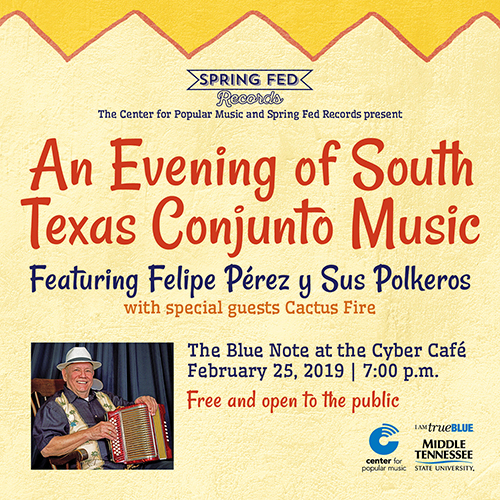 Conjunto Hall of Fame member Pérez and his band will be joined by special guests Cactus Fire to share this rich traditional Mexican-American music at the 7 p.m. event in MTSU’s new Blue Note at Cyber Café, located at 319 Friendship St.

MTSU’s Center for Popular Music and its record label, Spring Fed Records, are presenting the concert. A campus map is available at http://tinyurl.com/MTParkingMap.

Pérez, 78, a Corpus Christi native who now lives in San Antonio, specializes in the accordion and also plays the harmonica, bajo sexto, drums and bass. He began playing professionally at age 10, and his recording and performing career has so far spanned more than six decades, including his 2018 release from Spring Fed Records, “Texas en Polka.”

You can get a preview of Pérez’s performance and his recent album above.

Conjunto music developed in South Texas and northern Mexico in the late 19th century, when German settlers brought the button accordion to the region. Local residents added the bajo sexto, or “sixth bass,” a unique 12-stringed Mexican guitar, and the two-piece ensemble was soon providing music for working-class celebrations across the region.

The 1930s saw a surge of popularity outside the region when record labels came calling, creating a demand for music from innovators who’d begun playing the treble melody on their accordions instead of the bass-chord buttons of the old Germanic technique. This new style evolved after World War II into a four-piece ensemble by adding an electric bass and a drum kit, ultimately leading to the popularity of artists like Grammy-winning accordionist Flaco Jiménez.

Center for Popular Music Director Greg Reish is helping bring Pérez to MTSU for this concert.

“We were delighted and honored to work with him on a Spring Fed Records album that came out last year and are now thrilled that he’s coming to Tennessee to share his amazing talents and fascinating life story.”

“The Blue Note” is the college’s rebranding of the longtime south campus dining hall to include live music and other events. The Cyber Café is MTSU’s only food venue open until 2 a.m. daily, and it has a dedicated performance space. 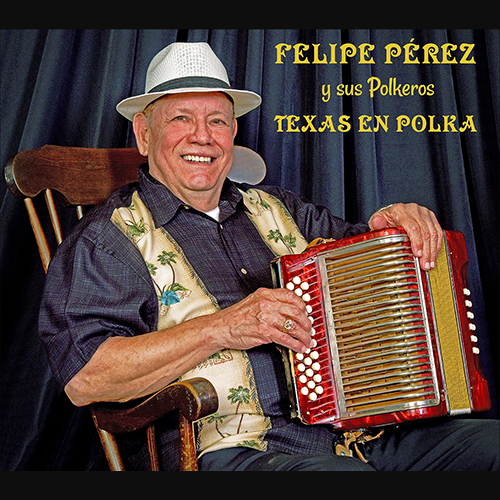 Conjunto Hall of Fame member Felipe Pérez, shown here on the cover of his 2018 release by the MTSU Center for Popular Music’s Spring Fed Records label, will perform with his band and special guests Cactus Fire Monday, Feb. 25, in a free 7 p.m. concert at the university’s Blue Note at Cyber Café, 319 Friendship St.