Blue Raiders on the Hill, they file bills, brief senators and representatives, and keep the assembly line that is the Tennessee General Assembly on track 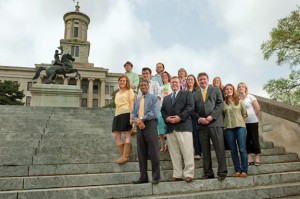 We all know that MTSU graduates are the lifeblood of Nashville businesses. Here, then, is proof that MTSU is also cranking out the graduates that make Tennessee politics go round. The following is an alphabetical (and fairly comprehensive) listing of MTSU alums working the halls of legislative plaza.

J. B. Brown (’04), audiovisual production specialist in the Tennessee House of Representatives.

Courtney Rynd (’09) worked in the House Clerk’s Office beginning with the 105th General Assembly and now works as a legislative assistant for Rep. John Ragan.

Paige A. Seals (’92) was hired as an attorney with the Office of Legal Services for the Tennessee General Assembly in February 1997. She provides legal advice for members of the assembly, assists them with the drafting of bills and amendments, oversees the preparation of summaries for bills and amendments, and serves on staff for the Tennessee Code Commission. (In her work with the Code Commission, Seals assists the publisher of Tennessee Code Annotated with the annual codification of public laws.)

David Sprouse (’05) is a legislative researcher in the Office of Legal Services.

Raymond Temple (’06) is an audiovisual production specialist on the Hill.

Tori Venable (’07) is a legislative aide for Rep. Jeremy Faison.

Brian Warner (’96) works for Legislative Information Services and is responsible for network routers, network switches, the phone system, domain controllers, and various servers on the network.

Allison Weir (’03) is a bill clerk in the Tennessee House of Representatives.