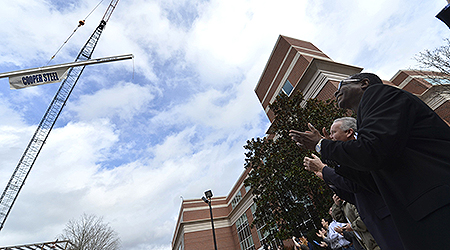 With area lawmakers and other friends on hand, Turner Construction Co. celebrated a milestone Jan. 11 for the $147 million MTSU Science Building with a special “topping out” ceremony.

MTSU President Sidney A. McPhee, at right, joins the assembled crowd to applaud as the final steel beam is raised into place at the Science Building construction site Jan. 11. You can follow the building’s progress by clicking on the photo above. (MTSU photos by Andy Heidt)

Turner team members set a signed steel beam, with MTSU and Turner logos on opposite ends, atop the 250,000-plus gross square foot facility, which is scheduled to open in early 2015.

Alumnus John Hood, a staunch Science Building ally during his service in the state House of Representatives, also attended. Hood is now MTSU’s director of governmental and community affairs.

“Just look how much work has been done in such a short period of time,” MTSU President Sidney A. McPhee said. “Today, as the last piece of steel is placed on the highest point of this structure, we move closer to our goal of having this facility ready for students by the spring of 2015.”

“Once completed, this sorely-needed structure will give our university a world-class teaching and research facility that will be not only the best in the state of Tennessee, but also in the top tier among universities across the nation,” McPhee added.

“It will demonstrate our commitment to providing more science and technology graduates to bolster the economy of our region and state.”

McPhee praised Turner Construction “on their achievements, which we can all see for ourselves today.”

“We are proud to be a part of the team and we look forward to a successful project — and many more — with MTSU,” said Turner senior project manager Kevin Overton.

Turner project executive Steve Kazay said the building is a total embodiment of a team effort.

“The team on the project — MTSU, TBR, the design team, Turner and our subcontractors — all are working incredibly well together,” Kazay said. “How those teams came together has been exceptional.”

John Gromos, Turner vice president and general manager, also announced that $2,000 scholarships will be awarded each semester to a science student and a building science or concrete industry management student. A third student may receive a scholarship at  McPhee’s discretion.

Dodging rain showers in the spring-like 68-degree temperature, more than 300 people attended the ceremony near the project site on the south side of campus.

“We’ve had great achievements to this point, but we have a long way to go,” Gromos said. “This is a hugely important project. Our challenge is to keep our focus and our staff safe. We want to make sure we finish strong.”