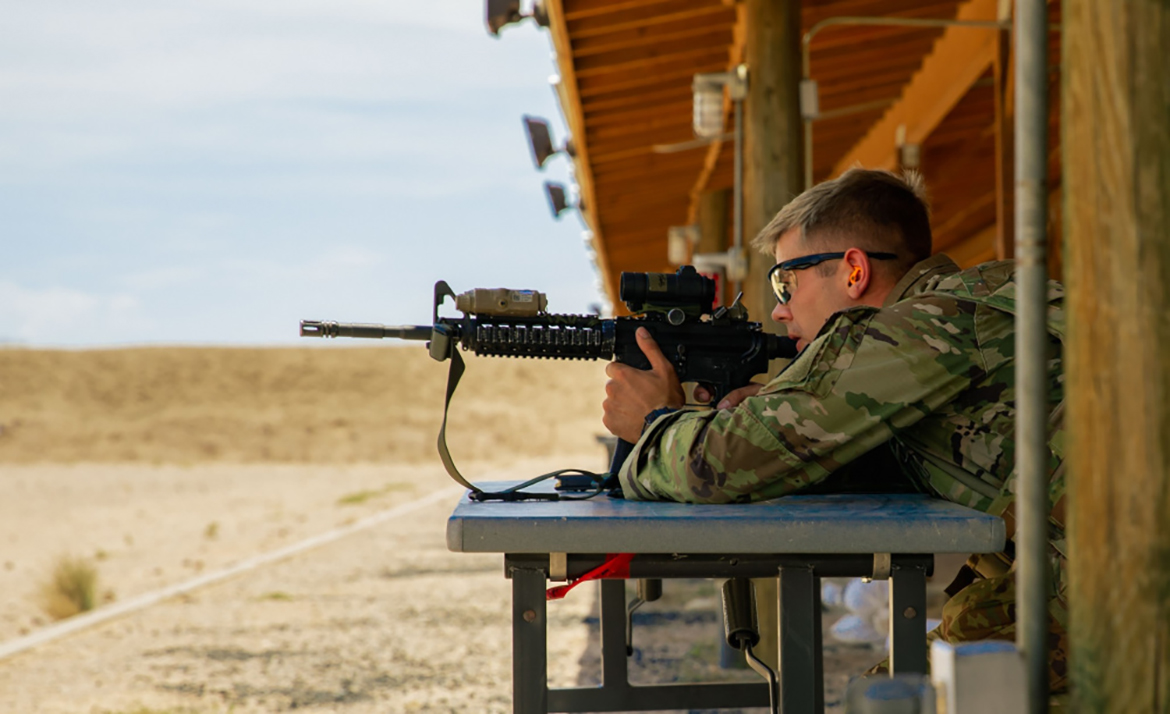 Sgt. William Lukens of the Tennessee Army National Guard’s 208th Area Support Medical Company takes aim at his target during the Three Weapons Challenge at the 2021 Army National Guard Best Warrior Competition at the Florence Training Site, Arizona, July 20, 2021. The competition spans three physically and mentally demanding days where competitors are tested on a variety of tactical and technical skills to be named the Army Guard’s Soldier and Noncommissioned Officer of the Year. The winners then represent the Army Guard in the Department of the Army Best Warrior Competition later this year. (U.S. Army photo by Spc. Carlos Parra)

The Murfreesboro, Tennessee, resident was one of 13 finalists who represented the best National Guard soldiers and noncommissioned officers in the nation during a grueling four-day event that concluded on July 23, according to a Tennessee Guard news release.

“It feels amazing,” said Lukens, “and I am really excited to carry out what I learned here back to my unit and sharpen the skills of other soldiers.”

With an elevation of 7,000 feet, Camp Navajo presented its own challenges for the competitors. Two weeks before arriving in Arizona, Lukens prepared himself for the higher elevation by hiking part of the Appalachian Trail; “I did 33 miles with a 55-pound pack. I left about 2 p.m. and hiked until 1 a.m. and I took a nap, and then I went the rest of the 10 miles.”

The first day of the competition started with the Army Combat Fitness Test, followed by a helicopter flight to the desert.

“Shooting is something I really enjoy,” Lukens said in the release. “We started with shotguns and pistols. We then flew back to the camp. We fired M-4s at night with [night vision goggles]. It was a lot of fun. I hadn’t done that before!”

After three hours of sleep, next came land navigation. “I was really proud of myself. I quickly found five out of five points,” he added.

To make it even more interesting, these were timed events with a mile long run in between.

The soldiers next worked two final events with a combination of stressors. The first event involved troubleshooting an M-4 rifle — blindfolded. The final event was assembling two different rifles from a box full of parts, in the dark, while loud music played in the background.

The final event on the second day of competition was designed to test these professionals in a unique environment. The competitors were bussed to an Olympic-sized pool to demonstrate how well they swam in full uniform.

“We had to swim 25 meters with an M-4 over our head,” said Lukens. “If your weapon went in the water, you failed.”

‘This is a great honor’

The next four events involved diving to the bottom of the pool to retrieve a piece of tactical gear, then swimming 50 meters, 100 meters and treading water with their hands over their heads without going under. Again, in each event the soldiers were in uniform. “I came in second in the swimming event, so I’ll train harder for next time,” Lukens said.

Next, they drove out to Arizona’s Mogollon Rim for a ruck march with a 35-pound pack. Lukens finished first; the soldier who came in second was a full 20 minutes behind him.

The final day of competition was a little more cerebral, the release said. There was an essay contest and a written exam, and the competitors appeared before a formal board. The competitors also were tested on their drill and ceremony.

“They didn’t tell me how well I did, but they said I could have failed an event and still won,” Lukens said.

“This is a great honor,” said Lukens. “I’m proud to represent my state during the competition, and I look forward to representing all 54 states and territories in the upcoming Army Best Warrior competition. This has been an amazing experience.”

Lukens enlisted in the Army National Guard in 2017. In addition to being a college student and president of his fraternity, Kappa Sigma, he is employed full-time with the Guard in Smyrna. He is keeping his plans for the future open but is leaning heavily toward becoming a drill sergeant.

Lukens will be moving on this fall to the U.S. Army’s Best Warrior competition to compete against both active-duty and Reserve soldiers. He will be representing more than 330,000 soldiers from 54 states and territories in the National Guard.