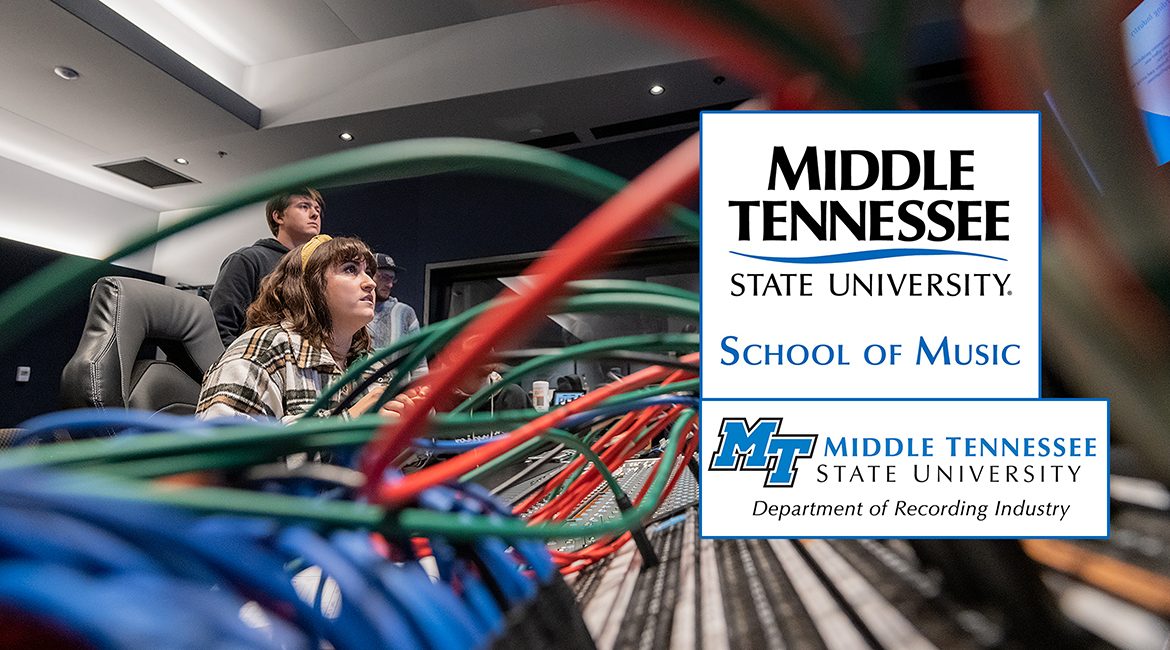 The lead guitar is ringing, the snare and the bass are keeping the beat, the horns are perfection, and the vocalists are just right.

Sometimes, as a group of Middle Tennessee State University School of Music and Department of Recording Industry students learned this fall on “Studio Saturdays,” the human element and the technology all fit together.

With a lot of effort and a bit of magic, a departmental collaboration gives them professional experience before they’re officially professionals.

Making use of Studio D once a month in the brand-new Main Street Studios facility while Master of Fine Arts in Recording Arts and Technologies students worked next door in Studio E, the Audio Production Program undergrads recorded performances by members of the School of Music’s Commercial Music Ensemble. 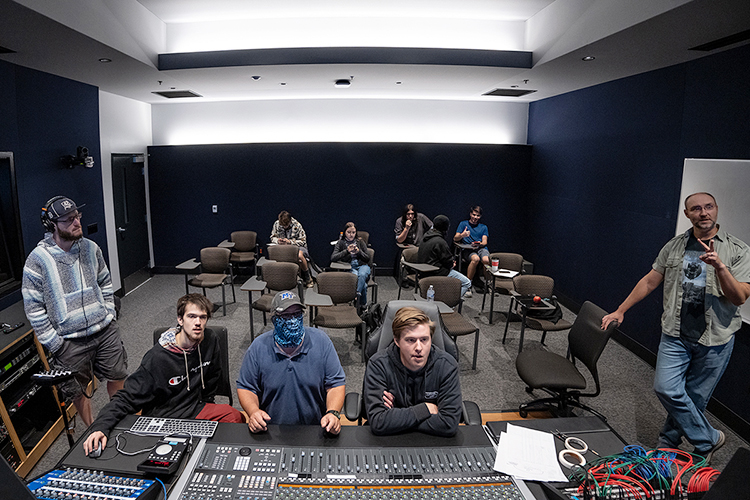 Their interdepartmental teamwork captured performances that showcase artistry on both sides of the studio glass. It also helps them learn how to run a recording session by observing their professors, music industry veterans and MTSU adjuncts Eben Powell and Matt Lund.

“Eh, we’ll just edit it. Don’t worry about it,” Lund reassured the groups after a session of a spectacular performance was cut short by a student who excitedly began talking over an intended fade-out. 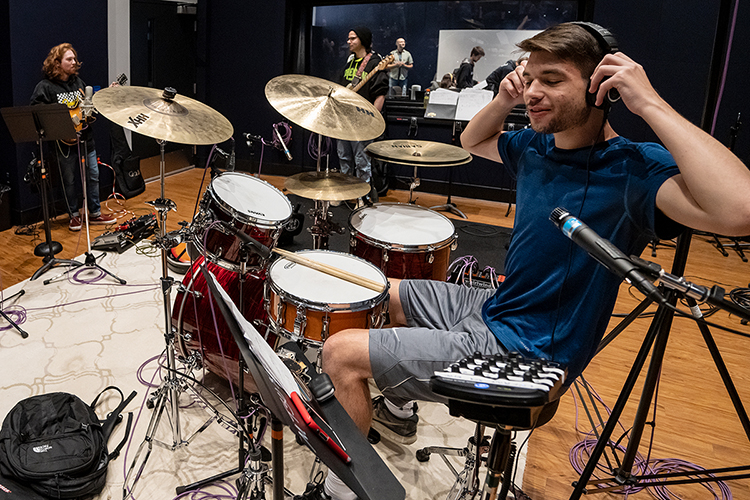 Clay Skiles, a senior audio production and mathematical sciences double major from Cypress, Texas, adjusts his headphones between recording sessions during one of this fall’s “Studio Saturdays” for MTSU School of Music and Department of Recording Industry students in Studio D in the brand-new Main Street Studios facility. Pausing with him are fellow Commercial Music Ensemble members and audio production majors Josh Garner, left, a sophomore from Macon, Ga., and freshman Jacob Williams of Mt. Juliet, Tenn. (MTSU photo by Cat Curtis Murphy)

“This class is great for in the future when you want to record your albums and songs and you’ll know what you’re doing,” said senior commercial songwriting major Michael Barber of Brentwood, Tennessee, a Commercial Music Ensemble member who’d been playing guitar in the “Studio Saturday” sessions all morning.

“You’re also learning that you can’t be noodling around and wasting time when you’re gonna record. Even the nicest guys will get mad at you for doing that. This is a serious business, and … they’re not being mean, it’s just like, ‘C’MON ALREADY.'”

‘It’s all-student, all the time’

“STOP NOODLING,” which became one of Powell’s favorite phrases one Saturday alongside “EXCELLENT, THANK YOU!”, isn’t merely a reaction from someone sensitive to extraneous noise.

In the music business, studio time starts at $100 an hour, and engineer, producers and other critical personnel have their own hourly rates.

“In the Main Street Studios at MTSU, however, “we call them ‘commercial’ but nobody’s paying (extra) to use these studios,” said Powell, who jokes that he expects his students to thank him at the Grammys. “It’s all-student, all the time.

“I have to mimic the real world as much as possible, though, because I can’t have a student go to their first gig and say, ‘I’ve never seen this before’ or ‘I’ve never done this.’

“I make it as close as I can to a real gig. And at a real gig, you get fed, too, so every time I host ‘Saturday Sessions,’ I feed everybody, because that’s what happens in the real world.”

‘All aspects of making music’

The nearly $2 million Main Street Studios, which were busy almost around the clock this fall and will be fully open for classes by fall 2022, have nearly 5,000 square feet of customized, expandable, “world-class” classroom, laboratory, production and gathering space in the relocated Studios D and E adjoining the university’s main entrance. 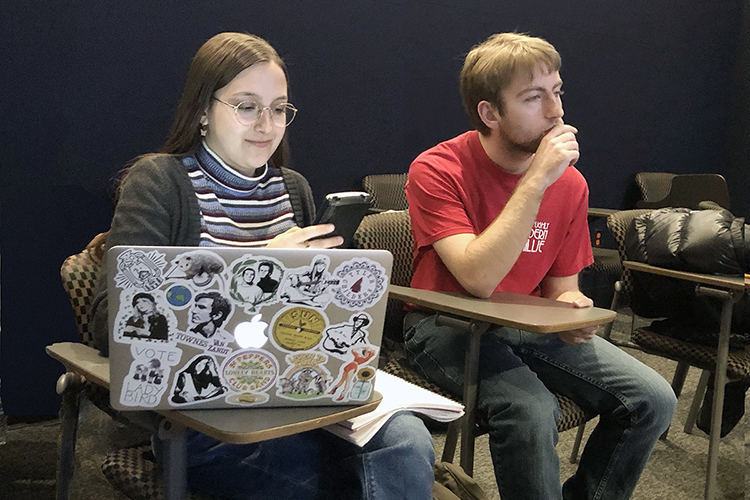 Maya Ronick, left, a freshman commercial songwriting major from Germantown, Md., sits with senior commercial songwriting major Michael Barber of Brentwood, Tenn., between recording sessions during one of this fall’s “Studio Saturdays” for MTSU School of Music and Department of Recording Industry students in Studio D in the brand-new Main Street Studios facility. Ronick and Barber are members of the School of Music’s Commercial Music Ensemble, which teamed up with Audio Production Program undergrads in an interdepartmental collaboration for professional experience. (MTSU photo by Gina E. Fann)

The professional opportunities at those studios and across campus also helped convince Ronick, a vocalist in the Commercial Music Ensemble, to attend MTSU.

“This is the first time I’ve been in a real studio, so it’s been cool to see how it actually works and all the technology,” she explained. “I was in a rock band in high school and we recorded songs, but it was in somebody’s basement, so this has been my first chance to see a true recording studio.”

Her focus on Americana music drew her to Nashville as well, since she says Maryland doesn’t have many performance or professional training opportunities for the genre.

“I’m definitely interested in all aspects of making music,” Ronick said, “behind the scenes, the boards, all facets of it.” 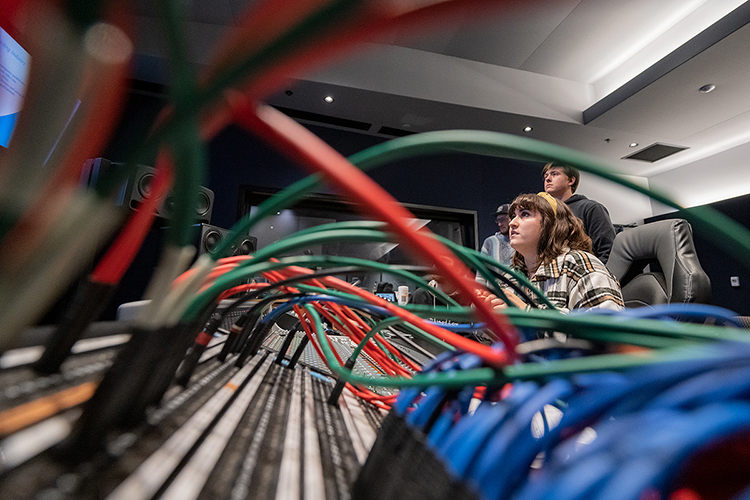 Some of the work the groups finished in one Saturday session turned up Dec. 3 at the department’s rejuvenated “Listening Night” monthly event, giving them the first chance to fully hear the finished products reverberate across the studios.

“This is my first studio class in general, and it’s clear we’ve got a pretty good deal here,” said Gillis, one of a growing number of women working the boards in Powell’s classes.

“It’s definitely exciting to see and to work with. I volunteered to run the (mixing) console today just because of this.”

Powell, a 35-year audio professional, earned both his undergrad and MFA degrees from MTSU before joining the department to teach in 2017.

Lund, who earned his Master of Arts in Jazz Studies from MTSU, is a multi-instrumentalist in multiple genres and a composer and educator who’s also a sideman for performances and recording sessions and worship leader and worship band member and producer. 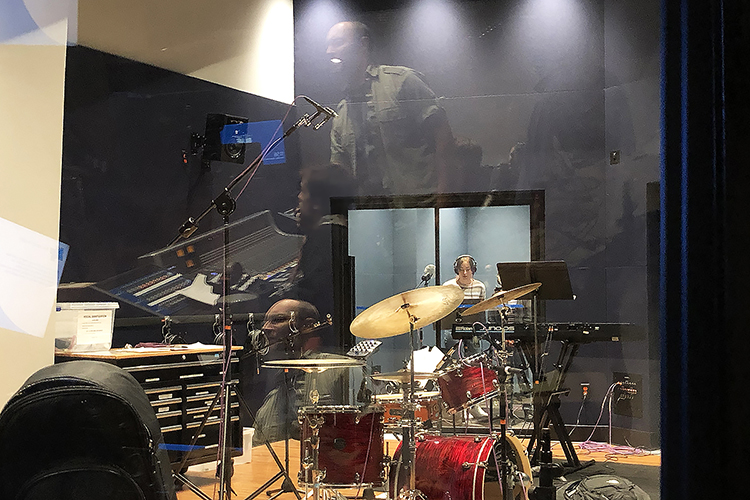 MTSU School of Music adjunct professor Matthew Lund is reflected twice in the glass between the control room and recording studio of the Department of Recording Industry’s Studio D in the brand-new Main Street Studios facility during a recent “Studio Saturdays” recording session with students in the Department of Recording Industry Audio Production Program and the School of Music’s Commercial Music Ensemble. In the recording booth behind the drum set is sophomore audio production major Alli Wildrick from Allen, Texas, a CME member who provided vocals for some of the day’s tracks. (MTSU photo by Gina E. Fann)