Autism, animal science expert Grandin has quite an...

Autism, animal science expert Grandin has quite an MTSU following

People arrived before 5:30 p.m. on a rainy Monday (Nov. 11), and they kept coming for a 7 p.m. event inside Tucker Theatre. They wanted to meet and hear Temple Grandin, a rock star in the worlds of animal science and autism.

The event sold out in September not long after it was announced Grandin, a professor of animal science at Colorado State University, author, livestock industry consultant and autism spokeswoman, would be speaking. Dozens stood in line for her autograph and photograph, and she graciously accommodated everyone.

Grandin, who was diagnosed with autism at an early age, used slides as she talked about her specialties and genetic selection of animals as part of the MTSU Distinguished Lecture Series visit open to MTSU students, faculty, staff and the community. 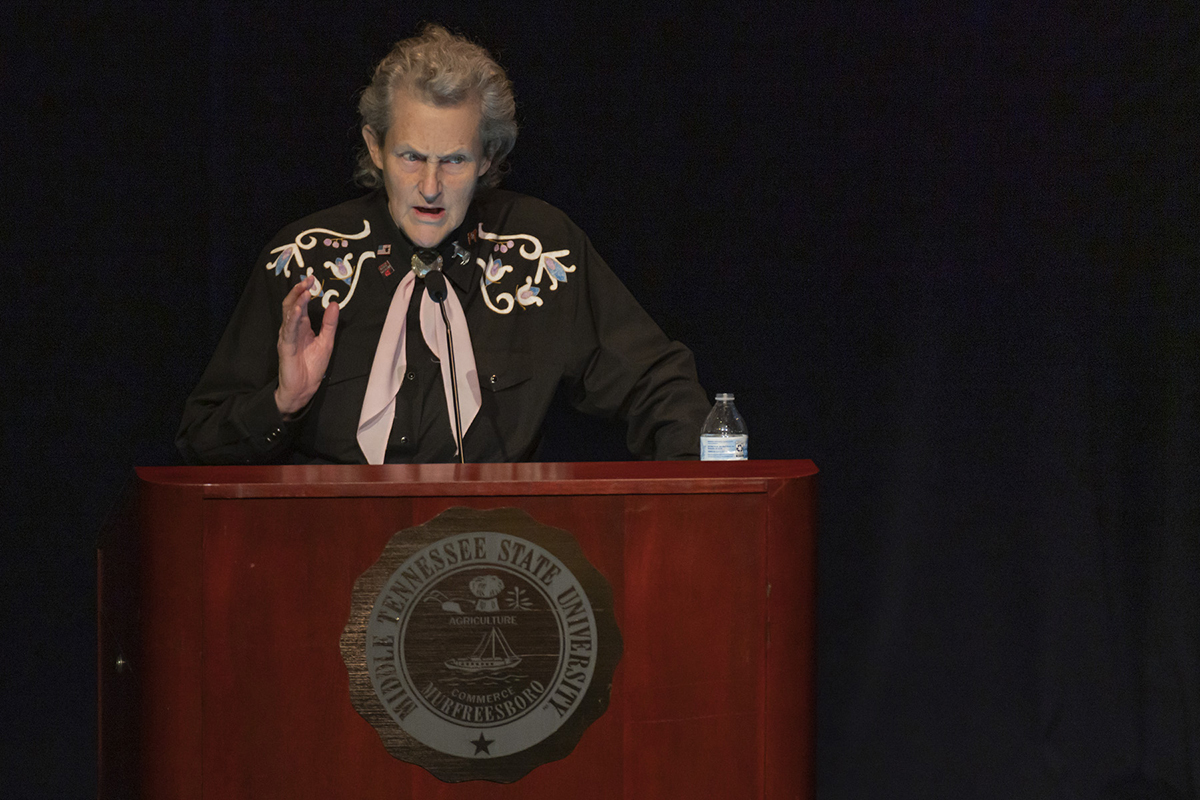 A Murfreesboro surgeon, former MTSU School of Agriculture director and parents of children with autism or similar conditions were part of nearly 900 people on hand for the approximately 45-minute, research-oriented (plus personal opinions) talk followed by a question-and-answer session.

“This is pretty normal,” Grandin said of the attention the MTSU crowd gave her and that she receives about once a week at speaking engagements. “My schedule gets busy.” Her objective, in addition to providing wisdom and advice, is to “find practical solutions to problems, whether it’s animals or autism.”

MTSU horse science Director Rhonda Hoffman reminded her about a 1995 paper Grandin peer reviewed and “how you taught me a lot.”

Jack Vardamis, 18, an MTSU junior animal science major, proudly wore a green T-shirt with “I’m With Temple” written on the back that he had just purchased.

In their Western apparel, Grandin, 72, and Caitlin Thompson of Nashville, Tennessee, could have been grandmother/granddaughter as they stood together. Thompson, 29, said she has had issues with social interaction and communication, and Grandin “has had such a positive impact on me.”

“I loved her talk as I felt like she was able to verbalize how her mind works,” Thompson said. “It may have seemed to others that she was ‘all over the place,’ but the connections she made between the animal brain and the autistic brain made perfect sense to me and helps to explain why I have always had an easier time understanding animals and connecting with them than with humans.”

Thompson applies Grandin’s methods and techniques with her own heifer, “Josephine.” 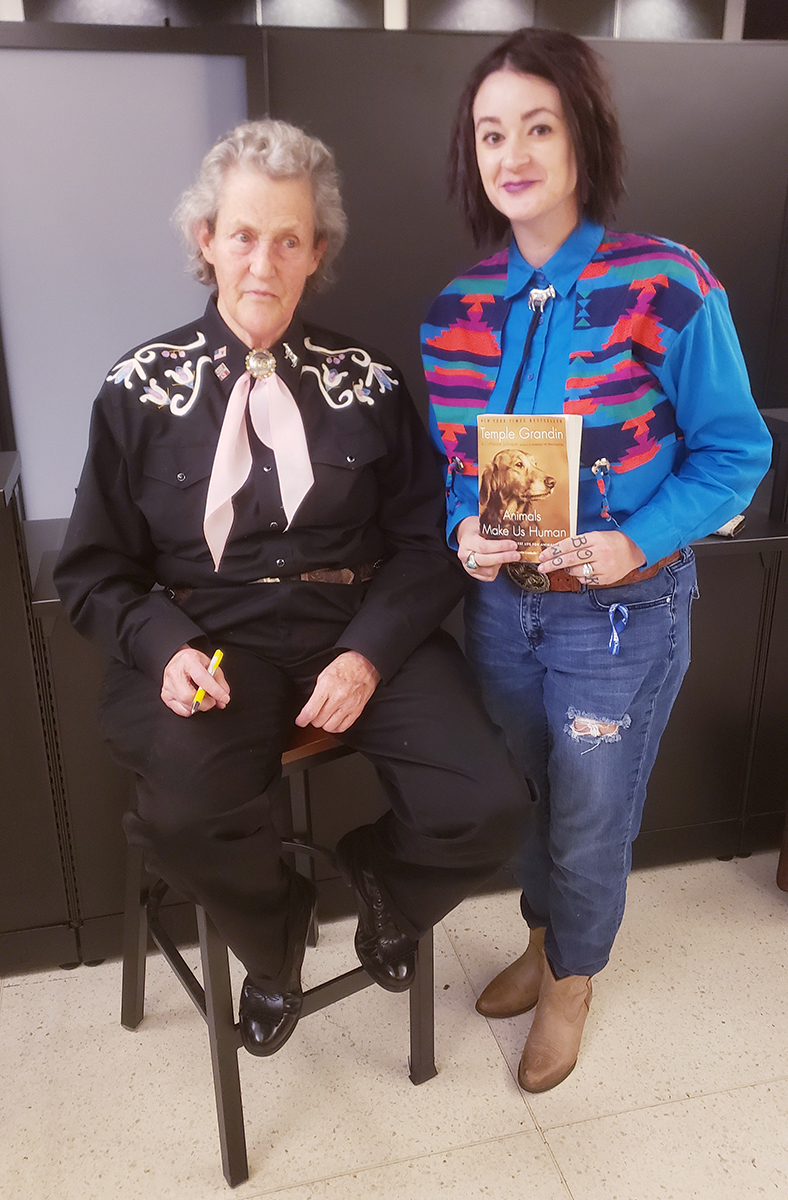 Because of the research in both animal science and autism by Temple Grandin, left, MTSU junior pre-vet major Caitlin Thompson became an admirer and met her hero Monday, Nov. 11, during Grandin’s appearance at sold-out Tucker Theatre. Thompson, who has read Grandin’s book, “Animals Make Us Human,” several times, was one of dozens who received an autograph and had their photo taken with the lecturer. (Submitted photo)

“She did a great job of explaining how she uses her autism to help understand animals’ behavior,” King said. “You don’t surprise animals with something. You let them voluntarily or slowly transition it to them. Same thing with autism: You have to precondition them, not surprise them.”

King said he likes Grandin’s “strong suggestion keeping trade courses within the public school system. I think it should be considered because it provides hands-on experience for students and exposes them to what they like and do not like.”

Grandin has earned numerous honors. Actor Clare Danes starred in a 2010 HBO drama about Grandin’s life and achievements. It earned five Primetime Emmy Awards and was nominated in 10 other categories. Grandin spoke Nov. 14 at the London Vet Show in England. 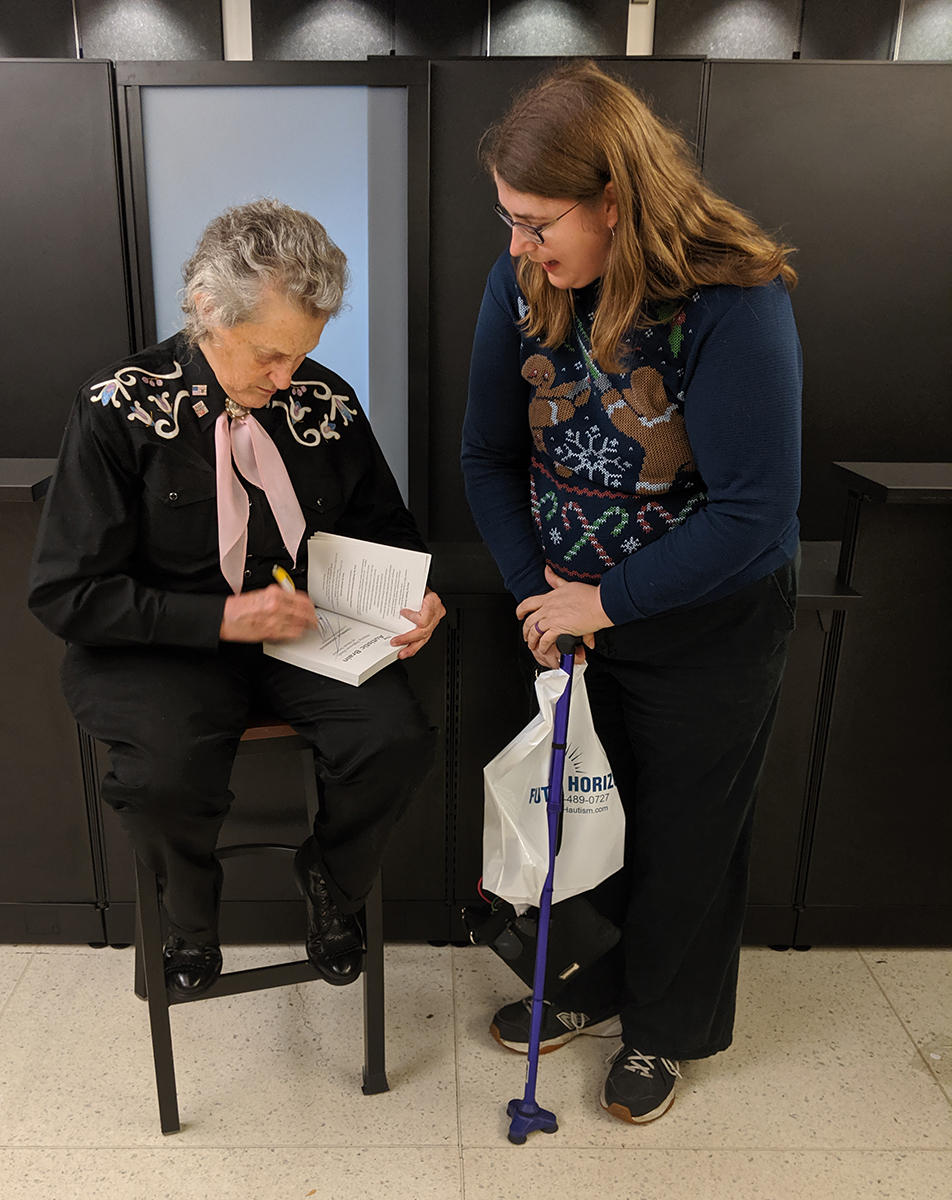 Temple Grandin, left, autographs a copy of her book, “The Autistic Brain: Helping Different Kinds of Minds Succeed,” she co-wrote with Richard Panek, for Bonnie McCarty, an adviser in the College of Behavioral and Health Science, Monday, Nov. 11. Grandin spoke to a sold-out crowd in Tucker Theatre. (Submitted photo)