Are you the one? Donate blood .. 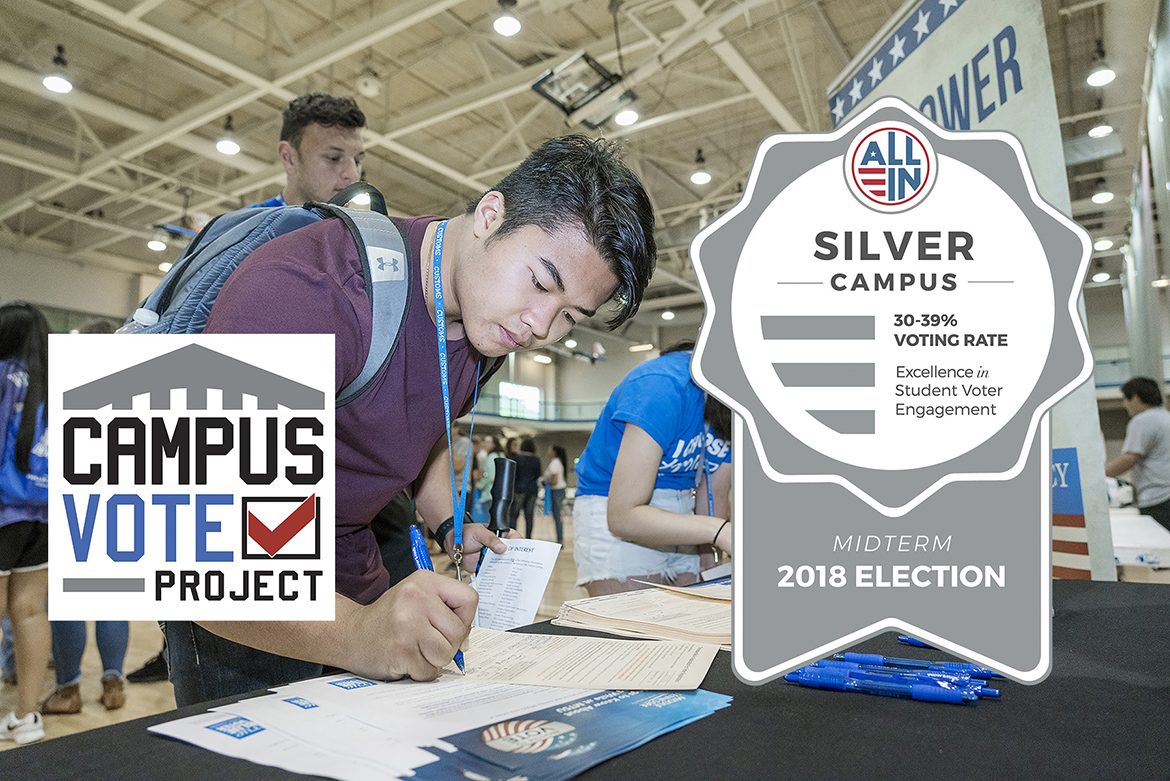 Middle Tennessee State University continues to be recognized for its advocacy of increased voter registration and participation, this week receiving a “Silver Seal” award at the 2019 ALL IN Challenge Awards Ceremony as well as recently being named a Voter Friendly Campus nationally.

Held Tuesday, Nov. 12, at the Newseum in Washington, D.C., the ALL IN Challenge Awards Ceremony recognized colleges and universities committed to increasing college student voting rates and specifically for achieving a student voting rate between 30% and 39% during the 2018 midterm elections. 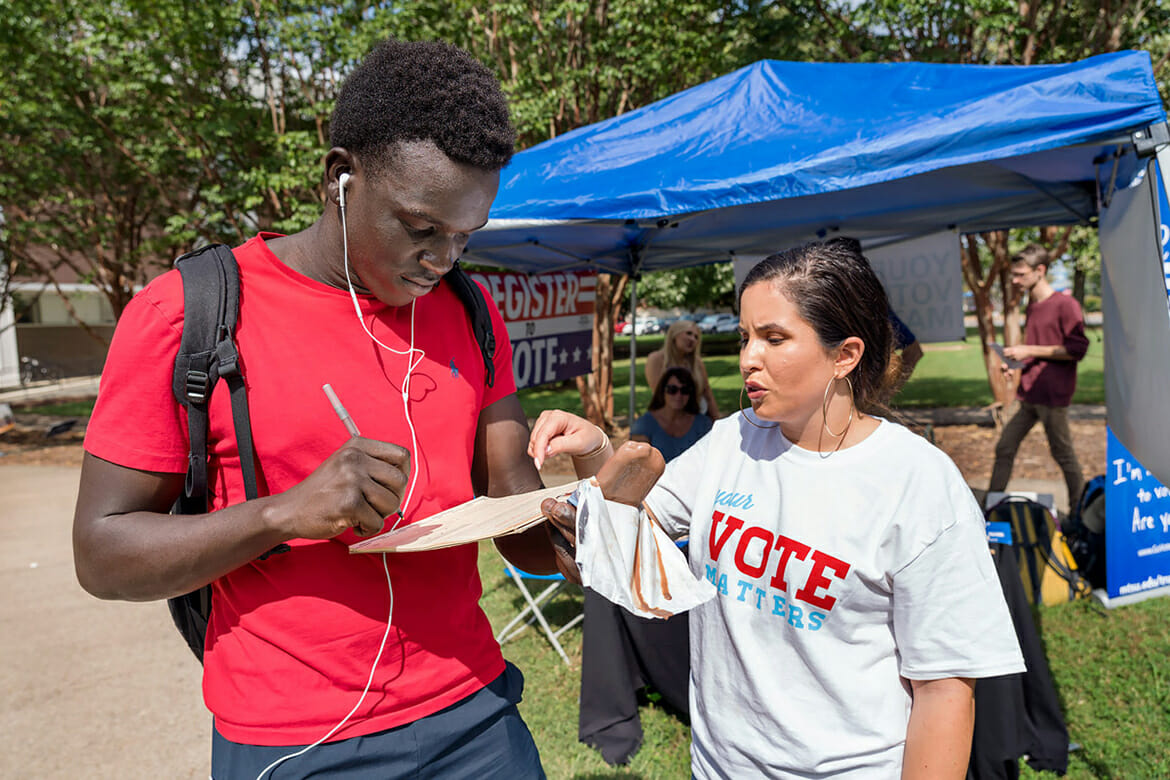 In this 2018 file photo, Athaiy Othow, left, a freshman mechanical engineering technology major from Gallatin, Tenn., gets help Oct. 8 outside Peck Hall from Monica Haun, a political science major from Knoxville and president of the MTSU American Democracy Project and the university’s Campus Election Engagement Project fellow, as he double-checks his new voter registration form to submit by Tennessee’s Oct. 9 deadline for the 2018 midterm elections. MTSU has been encouraging students, faculty, staff and visitors to register to vote or update their voter registration information since June as part of the university’s “True Blue Voter Initiative.” (MTSU file photo by J. Intintoli)

Mary Evins, coordinator for the campus chapter of the American Democracy Project, has worked with ADP student members to organize a number of voter registration and education efforts throughout each academic year.

MTSU continues its ongoing “True Blue Voter” initiative, a partnership with the Rutherford County Election Commission launched last year to boost voter registration and awareness in time for the 2018 midterm elections. The effort, with the help of ADP members and the MTSU Student Government Association, has added hundreds of new voters to the rolls so far.

“Our institution is so proud to receive these national recognitions for our efforts in growing and improving student voting,” Evins said. “Our faculty, staff, administrators, and students are committed to working together to increase our 22,000 citizen-scholars’ active citizenship and direct public engagement. MTSU is an acknowledged leader in Tennessee in graduating civic-minded women and men prepared to address the 21st-century challenges of our community, state,  nation, and world.”

Across the nation, student participation in elections increased from the 2014 midterm election to the recent 2018 midterms, according to a news release from the organization. A full list of silver seal awardees can be viewed here.

According to the National Study of Learning, Voting, and Engagement, an initiative of Tufts University’s Institute for Democracy & Higher Education, voter turnout at the more than 1,000 institutions participating in the study increased by 21 points from 19% to 40%.

MTSU’s 2018 increases were impressive as well:

“We are excited to honor MTSU with an ALL IN Challenge silver seal in recognition of their intentional efforts to increase democratic engagement and full voter participation,” said Jennifer Domagal-Goldman, executive director of the challenge. “More institutions like MTSU are changing culture on campus by institutionalizing nonpartisan democratic engagement efforts that are resulting in the incredible student voter turnout rates that we’ve seen across the country.”

The ALL IN Campus Democracy Challenge is a nonpartisan, national initiative recognizing and supporting campuses as they work to increase nonpartisan democratic engagement and full student voter participation. The Challenge encourages higher education institutions to help students form the habits of active and informed citizenship, and make democratic participation a core value on their campus.

More than 560 campuses, enrolling more than 6.2 million students, have joined the Challenge since its launch in summer 2016.

To earn the Voter Friendly Campus designation, campuses must submit a plan and report the results after implementing the plan for the general election.

The Voter Friendly Campus designation program was started in 2016 through the partnership of Campus Vote Project and NASPA, which is a professional association for student affairs administrators. The goal of the program is to help institutions develop plans to coordinate administrators, faculty, and student organizations in civic and electoral engagement, according to naspa.org.

Michael Burns, national director of the Campus Vote Project, spoke at MTSU on Nov. 4 as part of the University Honors College lecture series this fall on suffrage.

The latest two recognitions for MTSU follow another one announced in recent weeks as well.

More than 2,000 students registered to vote at the 48 schools participating in the September contest, with MTSU registering 381 new voters during the competition to win the category for four-year, public universities. The competition took place during September in honor of National Voter Registration Month. 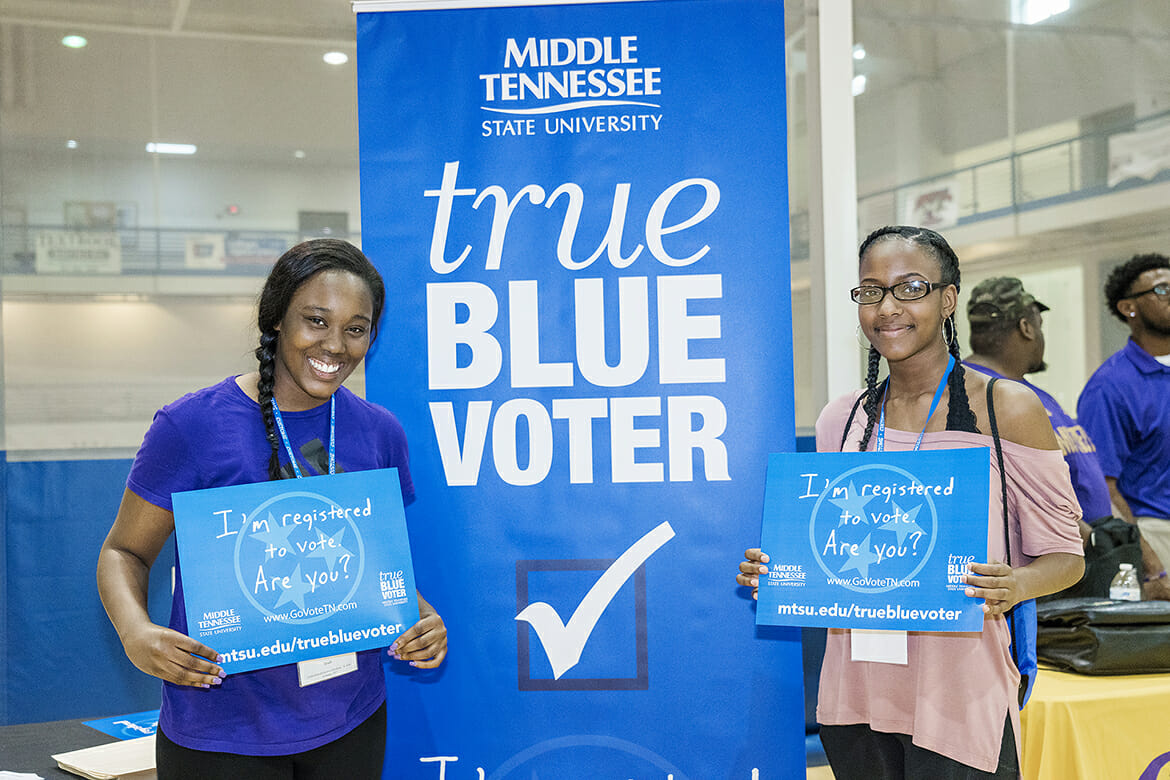 In this 2018 file photo, incoming MTSU freshmen Amarya Zachery, left, and her sister, Tierany Zachery, hold up “I’m registered to vote” signs after registering at one of the True Blue Voter registration tables available this summer at the Campus Recreation Center during the CUSTOMS new student orientation sessions. Almost 200 students have been registered during the ongoing initiative in partnership with the Rutherford County Election Commission. (MTSU file photo by J. Intintoli)