Welcome to the Future

MTSU has a beautiful campus. There are many beautiful buildings (both new and old) and several important landmarks that include the enduring columns of Kirksey Old Main, the obelisk at the Main Street entrance, the horseshoe in Walnut Grove, the columns in the roundabout from the Old Capitol Building, and the new veterans memorial near the University’s four original buildings. 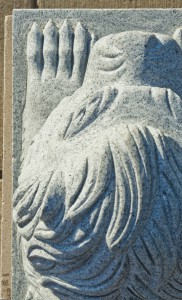 Those who know John Vile, dean of the Honors College, know that, next to writing, he loves to collect. Vile and his wife spend many Saturday mornings going to estate sales and flea markets, and the dean has a special fancy for old books, political collectibles, and art.

The hobbyist/collector just happened to spend two summers studying at Princeton University, where he was especially impressed by the statues of tigers spread throughout the campus.

“It was almost as though they were breeding,” Vile says. “One could practically direct a visitor through the campus by directing them from one such statue to another.”

Imagine Vile’s delight, then, when he was at a favorite consignment shop in Nashville a few years ago and saw two gray granite lions.

Though he says he was tempted to carry them to his own front porch, both had been brought from China, with which MTSU has many connections, and both were stately symbols that in Vile’s mind seemed to epitomize the strength of mind, will, and character that the Honors College seeks to imbue. Vile placed the lions outside the Paul W. Martin Sr. Honors Building, facing visitors approaching from the College of Mass Communication or the College of Education to the west.

“I thought perhaps they would also inspire courage,” Vile says. “After all, the Cowardly Lion in The Wizard of Oz is so memorable because it so contradicts the stereotype.”

To be precise, the lions are actually Fu dogs. In feng shui, the Chinese art of placement, a Fu Dog is a door guardian. The lion-like statues usually appear in pairs (a male and a female) and have muscular bodies, fearsome faces, and curly hair. Fu dogs are sometimes referred to as lion dogs, temple lions, or Chinese guardian lions.

Fu dogs guard and bring energy blessings to the places they “protect.” They are traditionally displayed in front of a door or a hallway near a door to prevent bad spirits and harmful energy from entering a home or business.

Vile says he only purchased the lions because of the University’s China connection and because he liked them—not because he is a follower of feng shui (or was even fully aware of the connection at the time). “I think they add a bit of personality to the entrances,” Vile says. “The Chinese consider them to bring good luck. And if they do so, then that’s just an added bonus!”

The deal was done after some negotiation. Luckily for Vile’s pocketbook, the owner had an MTSU connection and was proud to have the statues ending up on campus. Vile soon discov­ered that each lion seemed to weigh about a ton! He recruited one of his strongest students, who helped lift them into the dean’s Honda Odyssey and eventually onto the back steps of the Honors Building, where they now regally reside.

Smitten with his first pair of guardians, the search was on for Vile.

He found four other lions later at the same Nashville shop. They are now found on the other side of the Honors Building, facing the Rec Center and the new student services building. They are white rather than gray, smaller, look more distinctly Chinese than the first two, and are perhaps more whimsical than imposing. Two have marbles in their mouths.

Lions are often associated with strength, but Vile says he thinks the six now perched outside the Honors Building also look just a bit wise.

“The statues help remind me that the Honors College values not only the retention of facts but also strength of character and wisdom,” Vile says. “That, at least, is what I think of when I look at them. It seems fitting that statutes from one of the world’s most ancient civilizations, which values wisdom, have found a home at the Honors College.”

In many ways, the lions dotting the perimeter of the building also provide a new, signature, artistic marker for the campus.

Check out the Honors College in the video below: