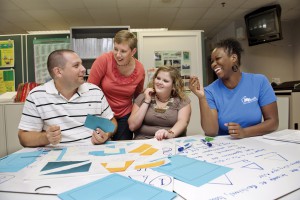 Eboni Eaton, a junior from Covington, Tenn., came from a family of teachers. She decided early in her college career not to follow in their footsteps.

“I didn’t want to be like everybody else,” she says. “Science is my thing. It’s something I’m really good at. So I was pre-medicine. I wanted to be a pediatrician because I love being around kids.”

A flyer detailing MTSU’s new MTEACH program—one of only 21 nationally*—altered Eaton’s chosen professional path. The program simply asks math and science majors to try out a one-credit teaching course free of charge to experience what it’s like to be a classroom teacher.

Eaton decided to give it a try. Within five weeks of starting the course, she was trained on lesson plans and getting experience teaching in a local classroom. She liked it so much that she switched her concentration to secondary education.

Eaton is not alone in making that decision. According to MTSU MTEACH program coordinator Leigh Gostowski, the program has been “radically successful.” Just one year into the program, MTEACH has increased by 222 percent the number of MTSU math and science majors now committed to becoming teachers. Going into the second full year of the program, more than 70 students are enrolled.

Those participation and conversion rates are filling a desperate need for teachers in math and science across the nation. Improving STEM (Science, Technology, Engineering, and Mathematics) education is key to maintaining American economic competitiveness because so many of the technologies we depend on today are rooted in math and science theory.

The situation is particularly acute in Tennessee. Students are required to take chemistry and physics to graduate from high school in Tennessee; however, the state hasn’t been able to meet the need for teachers in those subjects. Just a few years ago, the whole state produced only one physics teacher.

That’s a crisis—so much so that MTSU was willing to reach into the Tennessee public school system and recruit one of its brightest science teachers to work instead in the MTEACH program. MTEACH master teacher Sally Millsap received the 2008 Tennessee Academy of Science Distinguished Secondary Science Teacher Award while working as a chemistry teacher at Blackman High School in Murfreesboro. She says her decision to leave the classroom was the hardest she’s ever made but worth it given the potential impact of MTEACH.

“I had worked with new teachers in the field, and I didn’t feel like we were producing the quality graduates that we needed from our higher education system,” Millsap says. “I also knew from my administrator that we weren’t producing the quantity, either. I knew I could go in and get college students excited about teaching. Instead of teaching chemistry to one kid or 150 kids every year, I could teach 100 college students how to be good teachers, then they could go out and teach 100 students. So I knew my impact could be exponentially greater here.”

Millsap says teacher education programs like MTEACH are also rich with research opportunities. Combined with MTSU’s recently launched Mathematics and Science Education Ph.D. program, as well as its Learning, Teaching, and Innovative Technologies Center (the focal point for faculty development at MTSU), the University is well positioned to ask tough questions about what really works in the classroom, how students really learn, and what are the best practices in teacher education and in the field. The answers have the potential to be crucial findings at a time when math and science education is a matter of global competitiveness.