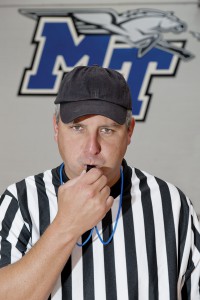 Gentleman’s Game: In a day and age marked by bad behavior among athletes, Colby Jubenville is pioneering research on collegiate sportsmanship.

When Brian Shulman, former all-SEC punter for Auburn University in the 1980s and successful entrepreneur, developed Learning Through Sports 12 years ago, he wanted to help youngsters make the connection between the Golden Rule and competitive sports. The results of his Internet programs for K–12 athletics have been remarkably successful.

Enter Dr. Colby Jubenville, professor in the department of Health and Human Performance and director of the Center for Sport Policy and Research at MTSU. Jubenville, himself a former college athlete, met Shulman in 2007.

“I told Brian I thought his platforms were good, but I could make them better,” Jubenville says. Focusing on the coach-athlete relationship, Jubenville created Real Sportsmanship, an online program platform especially for the collegiate level.

Real Sportsmanship asks questions and administers a pretest, then follows up with more questions and a post-test. The issues discussed include the realities that both student-athletes and coaches face, which include drinking, partying, sexual activity, cheating, and gambling. Participants are asked to reflect on their experiences and decisions as they relate to those issues. Jubenville says participants should better understand how to handle new situations and assume leadership roles on their teams and in life.

Shulman and Jubenville were excited when the Sun Belt Conference (SBC) called and wanted to implement the platform for a five-year period, starting in 2010.

“Not only the commissioner but also the presidents and athletic directors from all the institutions got on board,” Shulman says. “They said this was something they had to try to get a handle on.”

The Sun Belt Conference has concluded its first year of utilizing the Real Sportsmanship program.

Findings released from the Center for Sport Policy and Research at MTSU are based on data collected from 478 SBC coaches and 3,476 SBC athletes. The results indicate that the platform “significantly impacted several perceptional and behavioral aspects of coaches and student-athletes regarding sportsmanship.”

“We have seen a decline in the number of incidents of bad behavior, particularly on the part of the student-athletes,” Waters says.

Such results are drawing greater attention from other funding sources interested in backing Jubenville’s research. At press time, the John Templeton Foundation was showing significant interest in funding Jubenville’s effort to take his research to all NAIA schools in a program called Champions of Character, an interactive, reality-based assessment of the impact of five core values—integrity, respect, responsibility, sportsmanship, and servant leadership—on student-athletes and coaches.

Jubenville notes that his research has uncovered an important sportsmanship paradox—as the skill level increases, the ability to understand and implement sportsmanship decreases. It is a paradox that “each athlete is exposed to as he or she engages the learning platform,” Jubenville says.

Fortunately, the Real Sportsmanship program provides a means by which coaches and athletes can bridge this divide between skill and behavior before it grows too wide.