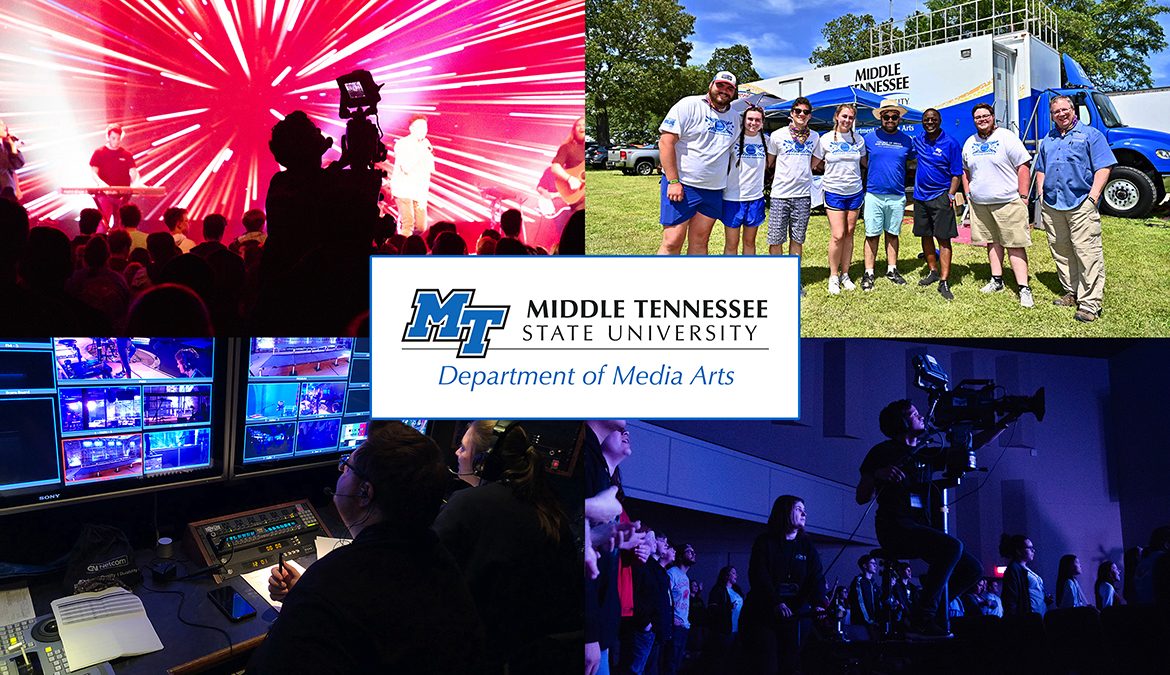 How can you learn a task when the task you’re supposed to observe isn’t being done?

Students in MTSU‘s multi-camera TV production courses this spring were as baffled as anyone else when they saw their scheduled live video projects with Nashville Fashion Week, the Nashville Symphony, the six TSSAA high school basketball tournaments, a university year-end rock concert, the Raider’s Choice Awards and even a new game show series blink off their calendars with every new email.

In their work, you must be on-site. Professor Robert “Bob” Gordon Jr., who coordinates the live production facet of the Department of Media Arts‘ Video and Film Production Program, also was puzzled, because, as he said, “My classes are one of the few that don’t translate well to online learning, so I’ve had to vamp.”

His answer? Bringing in experts via teleconferencing to talk shop with students and assigning remote-learning opportunities to encourage the students to analyze and discuss programs they watched.

“Even though the students can’t make as many shows as we planned, they are getting a chance to talk to some movers and shakers who do, so that’s a plus,” he said. “The shoots are canceled, but the learning continues.”

Gordon, a longtime TV producer who brought his news, entertainment and business expertise to academia and joined the MTSU faculty 13 years ago, teaches students how to produce, direct and serve as crew for a variety of television projects.

He also serves as executive producer for Media Arts Productions, the university’s live TV production company, and faculty adviser for MT10, the student-run TV station. He’s helped the department earn more international acclaim by leading its annual coverage of the Bonnaroo Music and Arts Festival in nearby Manchester, Tennessee.

“It’s not really something that you can learn by being talked to or read about or watching … even though there is a lecture component to it,” he said. “You might appreciate what’s going on, but it doesn’t really translate, so all of my classes … are very lab-intensive.”

Those labs this spring, for Gordon’s three levels of classes, had included in-studio cooking shows, with the help of students and professors in the dietetics concentration of the university’s Nutrition and Food Science Program; designing and conceiving and managing a weekly episodic game show; and two additional concerts and other special-event coverage.

“All that went away,” Gordon said. “I had to figure out, ‘OK, they have another seven weeks of paid classes, and we can’t do what the class is supposed to do, which is to shoot television, what do I do now?’”

He joked that he could’ve thrown up his hands and said, “‘Well, class is done! Whatever your grade was by midterm is it, see you next year!’ But I thought, that’s pointless, so I just had to figure out: What can I do when we can’t do what we’re here to do?” 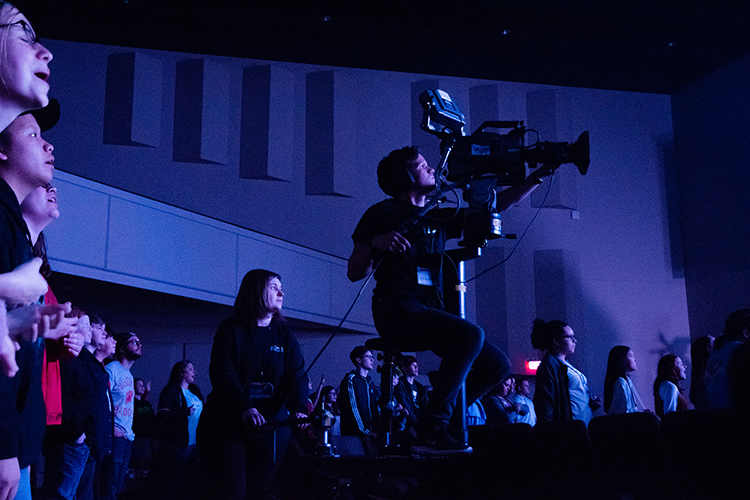 The best way he knew to meet the challenge was the way TV crews do: be flexible.

“In our field, doing live television, you have to have your Plan A and a Plan B and a Plan C and a Plan D, because all sorts of things aren’t going to work right. You can’t just freeze because it’s not the way you planned it. You have to be very flexible and very variable,” Gordon said.

Their Zoom classes helped the students boost the camaraderie and cohesiveness they need during production. They watched programs similar to their classes’ plans and analyzed how the pros got the work done, reporting the “rundown,” as it’s known in the industry, of the programs’ audio, video, graphics and camera placements to Gordon.

“Then I had nine Zoom guest lecturers with people that I’ve worked with in the past,” the professor said. The hour- to 90-minute-long talks with students featured professionals who direct “The Voice,” “Shark Tank,” “Jeopardy,” “Survivor” and multiple award shows, plus alumni pros who direct for ESPN, supervise scripts for the “Nashville” drama series and tour as video director for Post Malone. 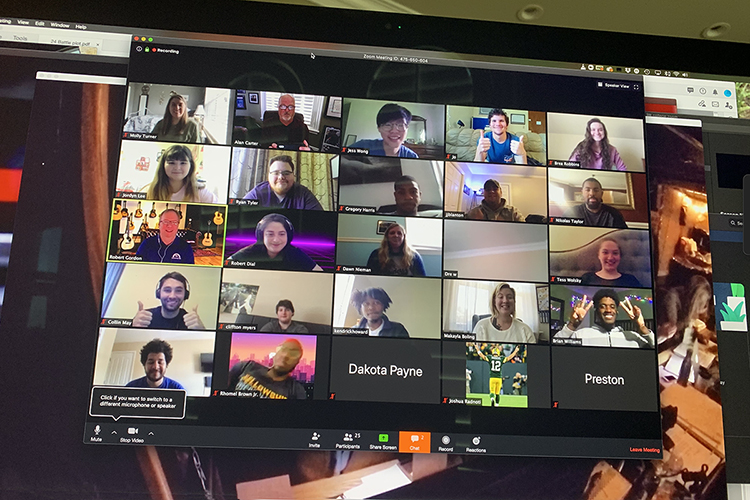 Seeing streamlined entertainment productions like the April 18 “Together at Home” worldwide virtual event also inspired Gordon and his students.

“I think it’s a great opportunity for … our entire industry to have to think outside of the box: how can we do a network special without all the pyro and cranes and the Steadicams?” he said. “I think people were just as entertained by that direct relationship as they would be with all the million-dollar sets and the 300-member crews.

“I hope that … everybody can go back to doing things the way they used to, but I also hope that this other approach will also be used in tandem with that when the situation merits it.”

The flexibility developed through his professional career has had an unexpected effect on his teaching, too.

“I felt this experience of having to stay home and teach online was different but not scary. It was ‘OK, it changed. Let’s go. Let’s do what we’ve been doing, but different.’ … The students aren’t running away from this thing just because they’ve been stuck in their dorm or their apartment. They’re just kinda waiting it out. We’ll jump back into it with both feet.”

For more information about MTSU’s Department of Media Arts in the College of Media and Entertainment, visit www.mtsu.edu/mediaarts. 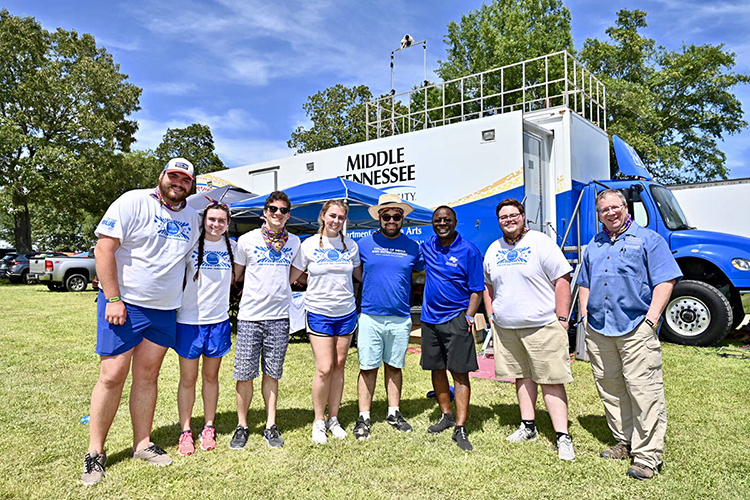 MTSU video and film production students pose with President Sidney A. McPhee, third from right, and Department of Media Arts professor Bob Gordon, right, in front of the university’s $1.7 million Mobile Production Lab on Day 2 of the 2019 Bonnaroo Music and Arts Festival in Manchester, Tenn. Student multimedia teams have covered Bonnaroo each summer since 2014 as a real-world classroom and hope to do so again when the pandemic-rescheduled event opens in September. (MTSU file photo by J. Intintoli) 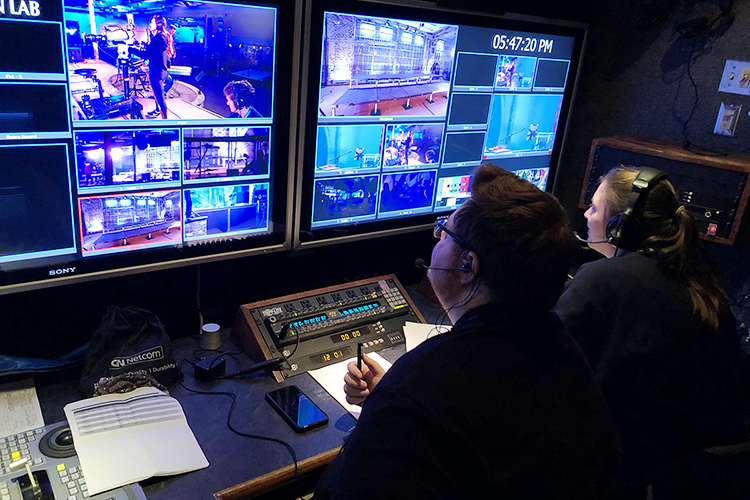 MTSU junior video and film production majors Ryan Tyler, left, and Molly Turner work in the university’s $1.7 million Mobile Production Lab during an eight-camera, livestreamed concert in the round, “Run to the Father,” Feb. 21 at The Experience Community Church in Murfreesboro, Tenn. The event, which included an in-house audience of more than 5,000 and an online audience of 12,000-plus, was one of 14 multi-camera shoots planned for the Department of Media Arts’ spring 2020 Advanced Multi-Camera Video Production class. The COVID-19 pandemic, however, limited the class to only seven of its planned shoots before MTSU switched to remote instruction — and no off-campus experiential learning opportunities — for all its courses. (MTSU photo courtesy of Professor Robert Gordon) 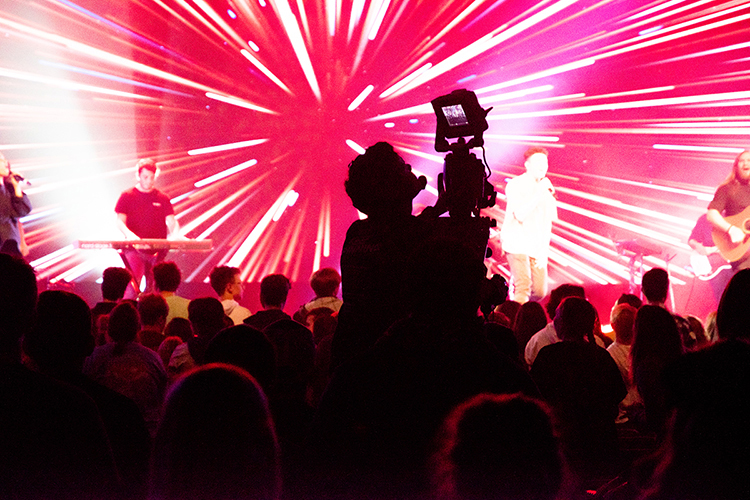