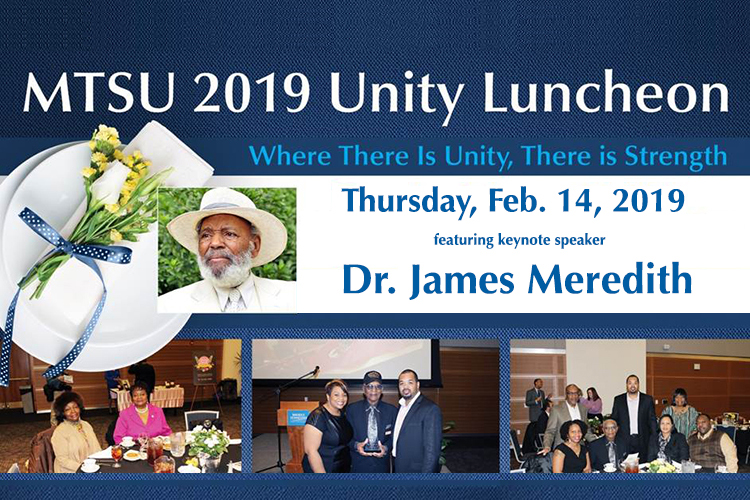 Tickets are now available for one of the most popular events of MTSU’s Black History Month celebrations: the 23rd annual Unity Luncheon.

Activist James Meredith, the first African-American student to attend the University of Mississippi, will present the keynote address: “Where There is Unity, There is Strength.”

Established in 1996, the Unity Luncheon pays homage to local “unsung heroes” — people aged 60 and older who have lived in Middle Tennessee for at least 25 years and made outstanding contributions to the community. This year’s honorees are:

Tickets are available online only through Friday, Feb. 1, at this website. They will not be available at the door. 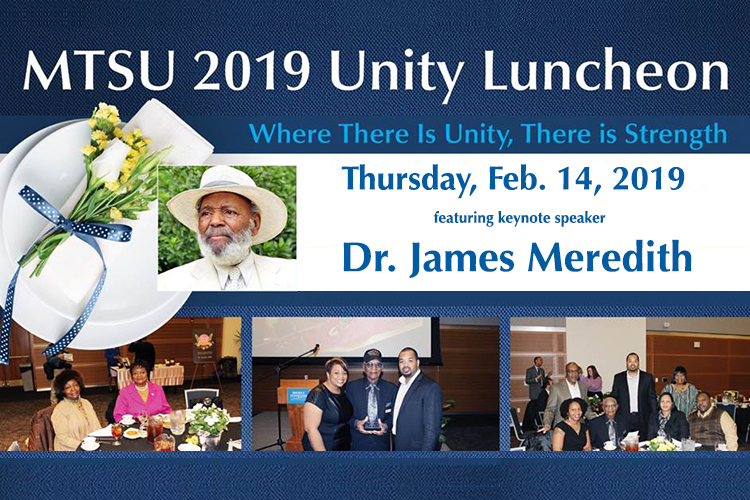 Click on the graphic above for the 2019 Unity Luncheon by Friday, Feb. 1. Tickets are only available online.

Meredith, spurred to action in 1961 by President John F. Kennedy’s inaugural address, applied to the University of Mississippi. He was denied admission twice because of his race, and he filed suit against the university, citing his rights as a U.S. citizen to seek higher education at a state-funded school as well as his excellent military and prior academic record.

The U.S. Supreme Court ultimately ruled in Meredith’s favor. Legislative wrangling and riots ensued, but with the assistance of 500 federal marshals and an estimated 51,000 Mississippi National Guard members and other federal troops, Meredith enrolled at the university on Oct. 1, 1962, and in August 1963 graduated with a degree in political science. 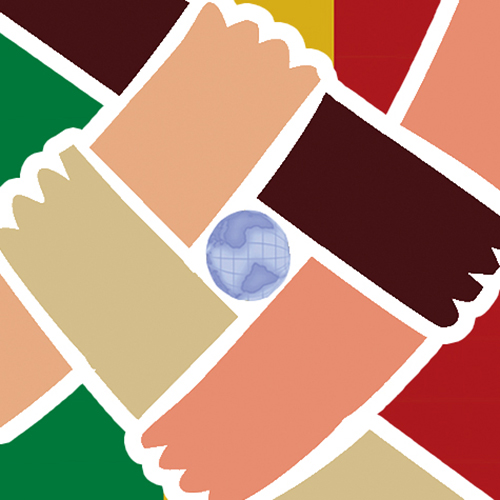 Meredith continued to be a central figure in the civil rights movement. In 1966, he orchestrated the “March Against Fear,” a 220-mile walk from Memphis, Tennessee, to Jackson, Mississippi, intended to encourage blacks to register and vote.

Meredith has continued to speak on the central role education plays in helping to lift people out of poverty. His most recent book, “A Mission from God: A Memoir and Challenge for America,” reflects on his personal life and urges Americans to overhaul the public education system so all people can overcome poverty.

For more information, contact Daniel Green, director of the Office of Intercultural and Diversity Affairs at MTSU and chairman of the Black History Month Committee, at 615-898-2831 or daniel.green@mtsu.edu. 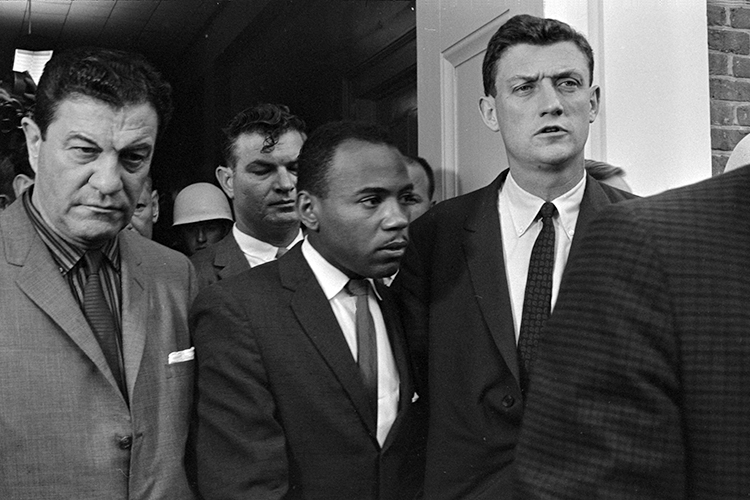 James Meredith, center, walks out of a building on the campus of the University of Mississippi, accompanied by U.S. marshals, in October 1962 after enrolling in the whites-only institution in Oxford to take classes and exercise his rights as a U.S. citizen. Meredith will serve as the keynote speaker for MTSU’s 2019 Unity Luncheon, set Thursday, Feb. 14, in the Student Union Ballroom. (File photo by Marion S. Trikosko/Library of Congress) 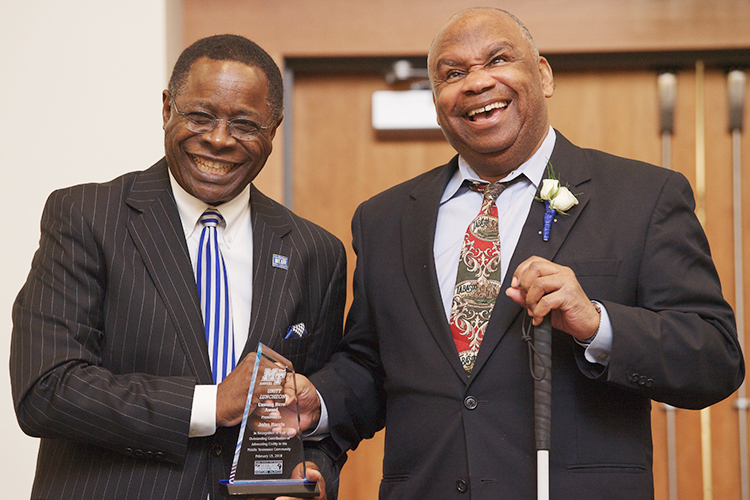 MTSU President Sidney A. McPhee, left, and John Harris, founding director of the university’s Disability and Access Center, laugh together during the February 2018 Unity Luncheon. Harris, an MTSU alumnus who retired in 2013 after more than 27 years establishing and expanding services for students with disabilities, was one of six local residents honored at the 2018 event as “unsung heroes” serving the community. (MTSU file photo by Andy Heidt)