‘MTSU On the Record’ rises for ‘Star-Spangled Bann...

‘MTSU On the Record’ rises for ‘Star-Spangled Banner’ encyclopedia

A handy reference book that will aid scholarship into our nation’s official anthem was the subject of a recent “MTSU On the Record” radio program.

The encyclopedia also provides details about controversial renditions of the anthem, such as Roseanne Barr’s 1990 performance during a Major League Baseball doubleheader at Jack Murphy Stadium in San Diego, California, and demonstrations performed during the anthem, such as the Black Power salute African American athletes Tommie Smith and John Carlos raised as a human rights protest as they stood on the medals podium during the 1968 Summer Olympics in Mexico City, Mexico.

While citizens have suggested “America the Beautiful,” “God Bless America” and other more singable songs as replacements for the anthem, Vile suggests there is a reason “The Star-Spangled Banner” endures.

“One reason, maybe, that the ‘Banner’ has succeeded over some of the other tunes is it is a way of combining two symbols together,” Vile said. “It’s about a symbol that’s arguably more important. The flag is probably more important than the song itself.” 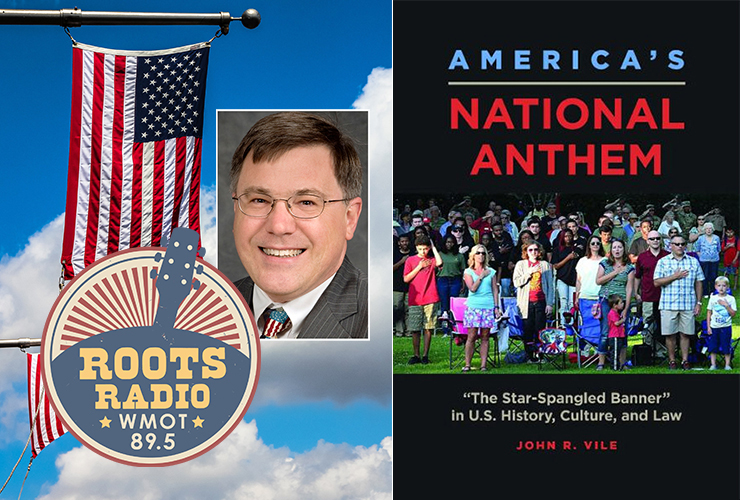 Dr. John Vile, inset center left, dean of the University Honors College and political scientist, discusses his new reference book about the history of the national anthem on the March 16 and 21 editions of the “MTSU On the Record” radio program on WMOT-FM Roots Radio 89.5. (American flag photo by Francesco Ungaro/Pexels)