Pumped up by a medley of tunes performed by the MTSU Band of Blue pep band and bolstered by a multitude of on- and off-campus volunteers, more than 1,500 new freshmen — part of 2,500-plus new students — moved into campus residence halls Friday, Aug. 2.

The well-oiled move-in machine is officially called “We-Haul,” the MTSU Center for Student Involvement and Leadership’s annual event to help new and returning students and their families move into Cummings and Corlew halls and other campus housing. 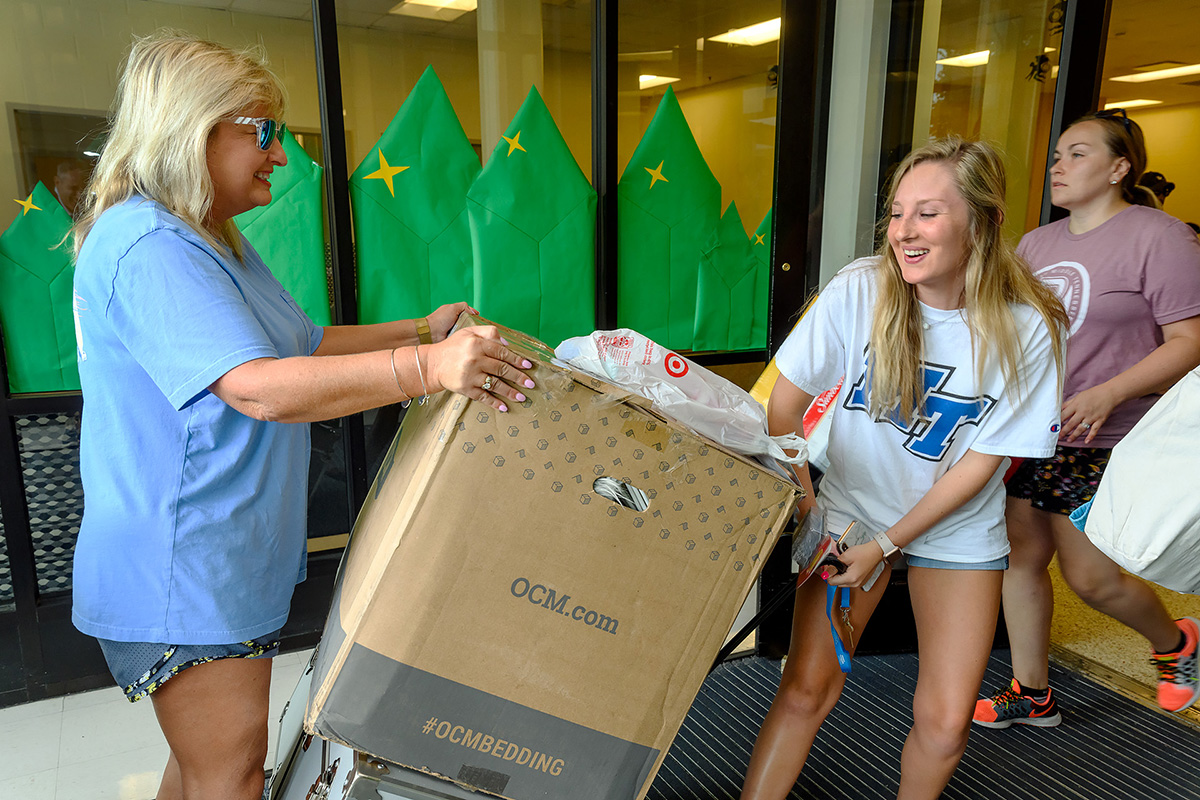 The We-Haul effort, which includes volunteers from campus organizations, fraternities and sororities, the Charlie and Hazel Daniels Veterans and Military Family Center, MTSU ROTC cadets and a small army from Belle-Aire Baptist Church, continues from 10 a.m. to 2 p.m. Saturday, Aug. 24. Students will continue moving in throughout the day.

MTSU President Sidney A. McPhee again welcomed the newcomers as they moved their belongings from vehicles to areas where volunteers would assist them.

“What an impressive and organized effort by everyone — parents, all of the volunteers and our MTSU staff — on such a hot and humid day,” McPhee said.

Freshman Madison Ratliff, 18, of Bristol, Tennessee, said the day was “going good so far. I’m excited.” The early childhood education major and Tennessee High School alumna, who came to campus with her parents, Sherry and John Ratliff, said she’s looking forward to “meeting new people and having a new experience.” 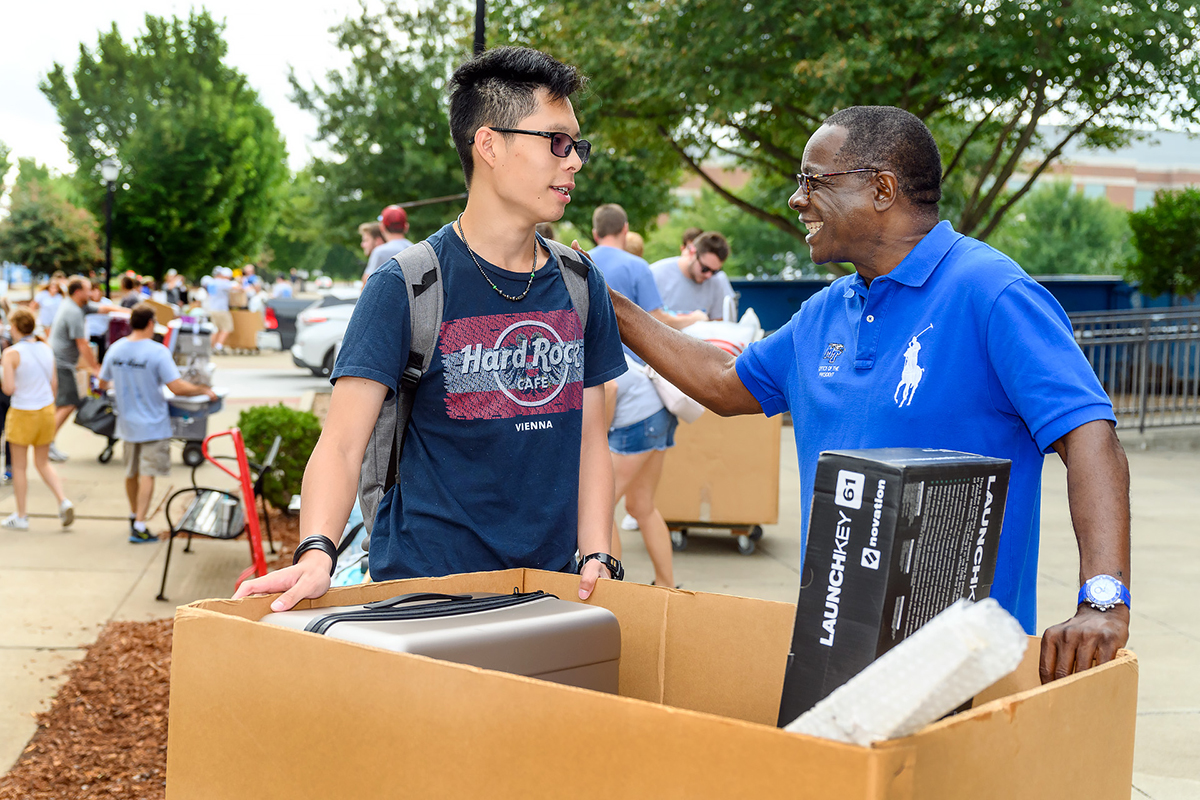 Leo Sun, left, an MTSU freshman and audio production major from Hsinchu, Taiwan, talks with MTSU President Sidney A. McPhee Friday, Aug. 23, on the first of two days of We-Haul, a volunteer effort to help new students move into campus housing. Sun was joined on the move-in by his mother, Sophia Chung. (MTSU photo by J. Intintoli)

Jessika Medford, 18, of Clarksville, Tennessee, a Clarksville High graduate who will major in forensic science at MTSU, called her move-in experience “a little hectic, but it’s exciting. I’m looking forward to the dinner and carnival tonight.” She was joined by her mother, Michelle Medford, and sister, Jada Medford, 16.

Jackie Victory, director of MTSU’s Office of Student Organizations and Service, said she once again appreciated volunteers helping with the move.

“Belle-Aire, fraternities and sororities, and at least 10 campus ministries are assisting,” she said. “I’m told we have 2,500 (new students) needing to be moved in. And I’m thankful it’s not too terribly hot and raining.”

The new freshmen, the Class of 2023 will attend University Convocation at 5 p.m. Saturday, Aug. 24, in Murphy Center to hear guest speaker Tara Westover, author of “Educated: A Memoir,” the 2019 Summer Reading Program selection. The annual President’s Picnic in Floyd Stadium for new students and their families will follow Convocation.

The MTSU Athletics Fan Day will begin at 7:15 p.m. in Floyd Stadium after the picnic. The event is open to the public and will feature the band The Respectables. 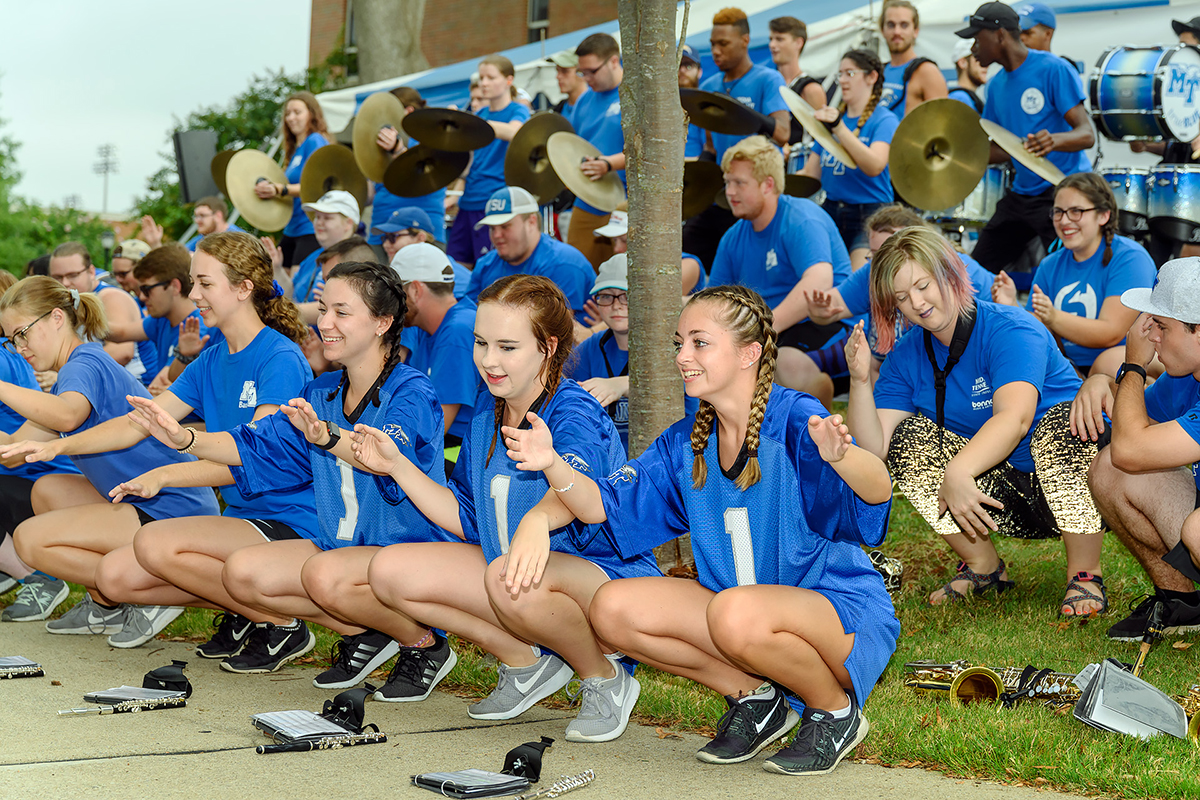 MTSU Band of Blue pep band members entertain new freshmen moving into campus residence halls, their families and others with dance moves and a medley of tunes during the We-Haul move-in Friday, Aug. 23, outside the Stark Agriculture Building on MTSU Boulevard. (MTSU photo by J. Intintoli) 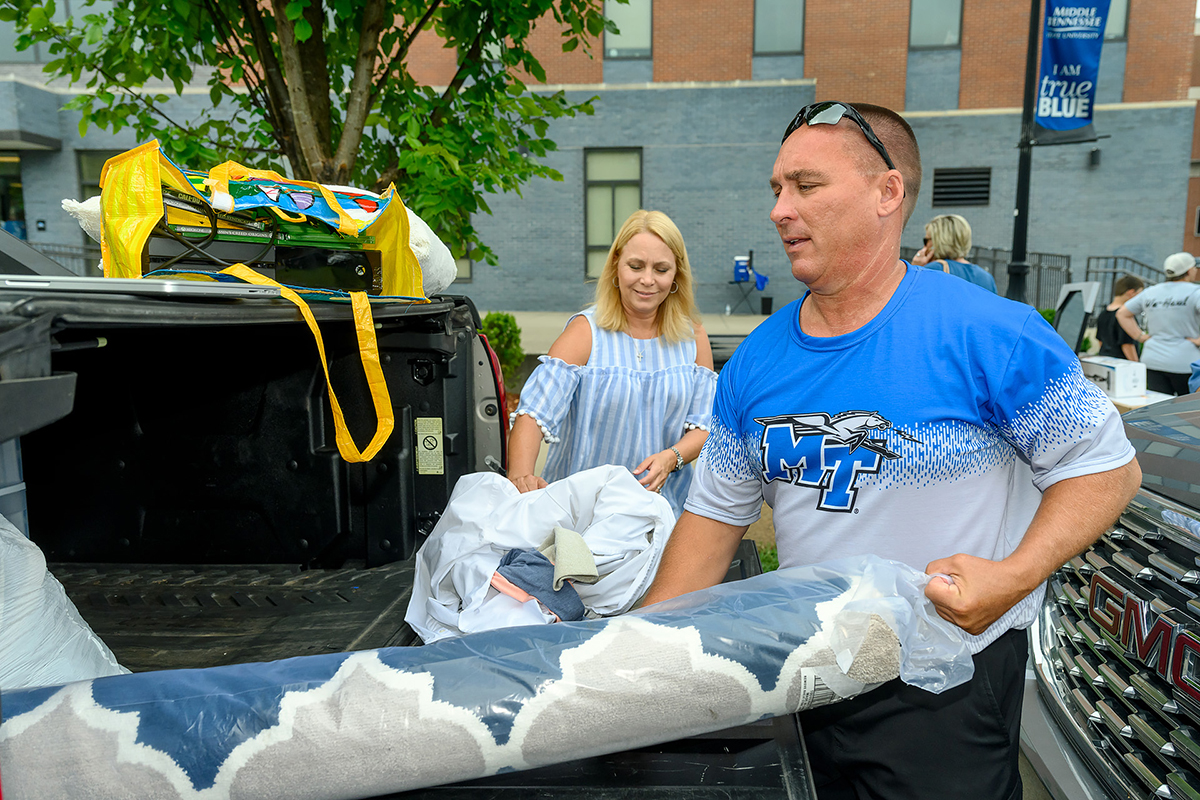