MTSU history professor Louis Woods recently shared his expertise as a featured panelist on a webinar focused on the importance of continuing to discuss race and racial injustice.

Hosted by the cloud-based human resources software company Paylocity in partnership with The Burtin Group, the webinar, titled “Why is the Conversation about Race so important in Today’s Society? Episode 1,” was the first in a series of planned discussions on the topic. 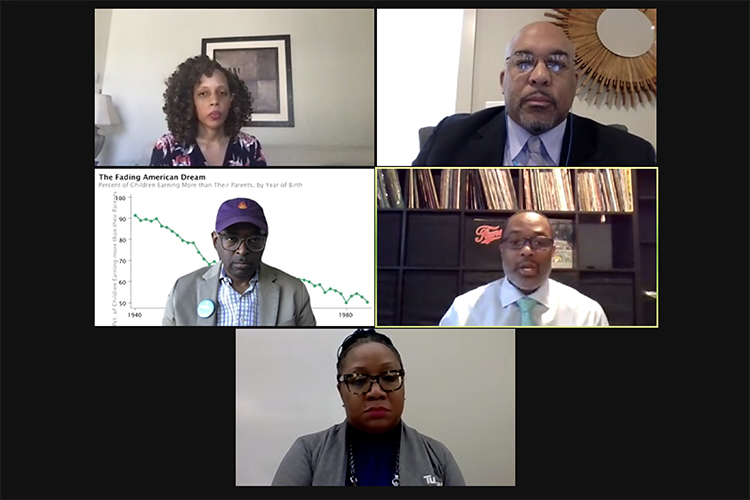 “The conversation of race is one that we understand is super important,” said moderator Darnell Burtin of The Burtin Group. “What does equity look like? What does diversity look like? … This is a conversation that we’re continuing to have to have, and the question becomes why do we have to keep having it?”

Woods, an associate professor of African-American history and former Africana Studies Program director at MTSU, has been the president of the MTSU Black Faculty and Staff Association and currently serves as the Presidential Fellow for Social Justice and Equality.

His research has appeared in the following academic journals: Journal of Urban History, Journal of African American History, Health Promotion Practice, and The American Journal of Economics and Sociology, and the Journal of North Carolina Association of Historians.

Woods spoke about his years of research as a scholar in gathering documented evidence of the systemic inequities in this country, but also the seminal moment in which the nation now finds itself following the deaths of George Floyd in Minneapolis, Minnesota, and Breonna Taylor in Louisville, Kentucky, at the hands of police.

“I think that why this is such a critical conversation to have now is that it took the world stopping for a critical mass of white Americans to engage in this conversation,” he said. “Black Lives Matter is not new. Even the words that George Floyd spoke, ‘I can’t breathe,’ are not new.”

• Pamyla Fountain Brown, community and citizenship director at Turner Construction Co. Brown has served as an advocate in the Diversity and Inclusion ecosystem for nearly 25 years with a primary focus on workforce and community equity and inclusion programs. She currently works full-time at Turner Construction and is responsible for initiatives engaging Minority and Women Business Enterprises, Community Based Organizations and the contracting community at large.

• Michael A. DeVaul, national strategy leader for the Boys and Young Men of Color and National Equity Network for YUSA as well as a senior vice president at YMCA of Greater Charlotte, North Carolina, as well as its chief social responsibility officer. The Obama administration recognized DeVaul as a Champion of Change, pointing to his work as a 30-year-plus veteran of the YMCA, recognized for his community building and diversity work as well as his leadership in supporting the Charlotte Y’s global partners in Senegal, Gambia and Jerusalem.

• Dr. GiShawn Mance, assistant professor of Psychology at Howard University, Washington D.C. and a licensed clinical psychologist in private practice in Silver Spring, Maryland. Her scholarly work focuses on culturally and contextually relevant school- and community-based mental health interventions. Her clinical specialty areas include, but not limited to, adolescent mental health, complex trauma, race-related stress/trauma, and mood disorders. She has contributed to the national dialogue on race and/or mental health as an expert guest on NPR, the Washington Post, National Geographic and Yahoo.com.

You can watch their full conversation below: