Artifacts from York WWI battle site on exhibit at ...

Christmas cheer abounds in the.. 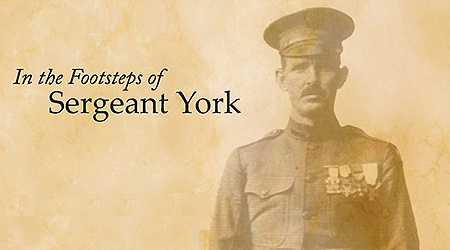 NASHVILLE — Remnants of American history from a World War I battle involving Sgt. Alvin C. York are on exhibit at the Tennessee State Museum, thanks to a retired MTSU professor and his research colleagues.

Dr. Tom Nolan, former director of the Center for Spatial Technology at MTSU and a retired geography professor, organized expeditions in France’s Argonne forest to locate the site of York’s historic October 1918 struggle as a dissertation project between 2006 and 2009.

After years of extensive research to pinpoint the site, Nolan and Dr. Michael Birdwell, an associate professor of history at Tennessee Tech University, first led a team in 2006 to the battle site where York and his men overtook a German stronghold outside Châtel Chéhéry, France. Over the course of three expeditions, they recovered more than 1,400 artifacts of war.

Some of those finds are part of “In the Footsteps of Sergeant York,” a free public exhibit at the state museum on view through May 9, 2013.

The exhibit also includes GIS/GPS equipment used during the research expeditions, as well as archival images and short documentary clips of York, the Western Front and the Meuse-Argonne, to lead audiences through the process of how this important place, once thought lost, was rediscovered.

Uncovered shell casings, gravesites and German and American artifacts strongly support that the site is indeed the battleground where York’s company killed 21 German soldiers and captured another 132 during an attack Oct. 8, 1918.

One of Tennessee’s most celebrated veterans and a native of Fentress County, York was one of 17 members of Company G of the 328th Infantry Regiment of the 82nd Division.

The 328th was sent to rescue nine companies from the 308th Infantry of the New York 77th Division, members of the Lost Battalion who were cut off from allied supply lines and surrounded by German troops.

The rescue effort took place during the Meuse-Argonne Offensive, an allied assault on German lines and the last major battle of WWI.

After 47 days of fighting in the hillsides between the Argonne Forest and the Meuse River near Châtel Chéhéry, France, York was promoted to sergeant and awarded the Medal of Honor, which details his actions on Oct. 8, 1918.

“After his platoon had suffered heavy casualties and three other non-commissioned offers had become casualties, Cpl. York assumed command,” the medal’s documentation reads. “Fearlessly leading seven men, he charged with great daring a machine-gun nest which was pouring deadly and incessant fire upon his platoon. In this heroic feat, the machine-gun nest was taken, together with four officers and 128 men and several guns.”

The battle raged until Nov. 11, 1918. York and seven Company G soldiers, who also are commemorated in the new exhibit, marched about 200 prisoners of war more than six miles south to the brigade headquarters in Varennes.

The site of the Oct. 8 fight was under dispute for years because a stream in the area had been rerouted and scholars had differing opinions on the exact site.

In 2006, Nolan used geographic information system technology to combine spatial information from French and German battle maps and maps annotated by York’s commanding officers, Col. G. Edward Buxton and Maj. E. C. B. Danforth, with written accounts by German and American participants. The information was then superimposed upon the modern landscape to help the international research team focus their metal-detection fieldwork.

Between 2006 and 2009, the team recovered hundreds of artifacts as well as the graves of the six members of the 328th who died in the Oct. 8 fighting. Private William E. Wine, for example, is known to have died with a head wound. A helmet with a bullet hole — believed to be Wine’s — was uncovered by the research team and is part of the exhibit.

Other found artifacts are items discarded by German soldiers as they surrendered to U.S. forces, including gas masks and filters, bayonets, Mauser rifle bolts and fired German rifle rounds.

Spent Colt .45 rounds were found at the site as well. Pistols and revolvers were not standard WWI issue.

York is known to have had a pistol, and forensic testing by the Tennessee Bureau of Investigation on the artifacts has concluded that at least one other American soldier carried a revolver.

The exhibit is part of the Military Branch of the Tennessee State Museum, which is in the War Memorial Building on Sixth Avenue in downtown Nashville. The museum is open 10 a.m. to 5 p.m. Tuesday through Saturday and 1 to 5 p.m. Sunday. It’s closed each Monday and on Christmas Day, New Year’s Day, Easter and Thanksgiving.

For more information about the exhibit, please contact the museum at 615-741-2692 or museuminfo@tnmuseum.org or visit its website, www.tnmuseum.org. For more on the research effort, visit www.sergeantyorkproject.com.