Thrifting: Why You Should + Wh..

The MTSU students entered his office planning to share about their particular areas of study — and they did — but walked away hearing Terry, who represents Rutherford County west of Murfreesboro in the 48th District, tell them “to enjoy and follow your passion and figure out where you fit.” 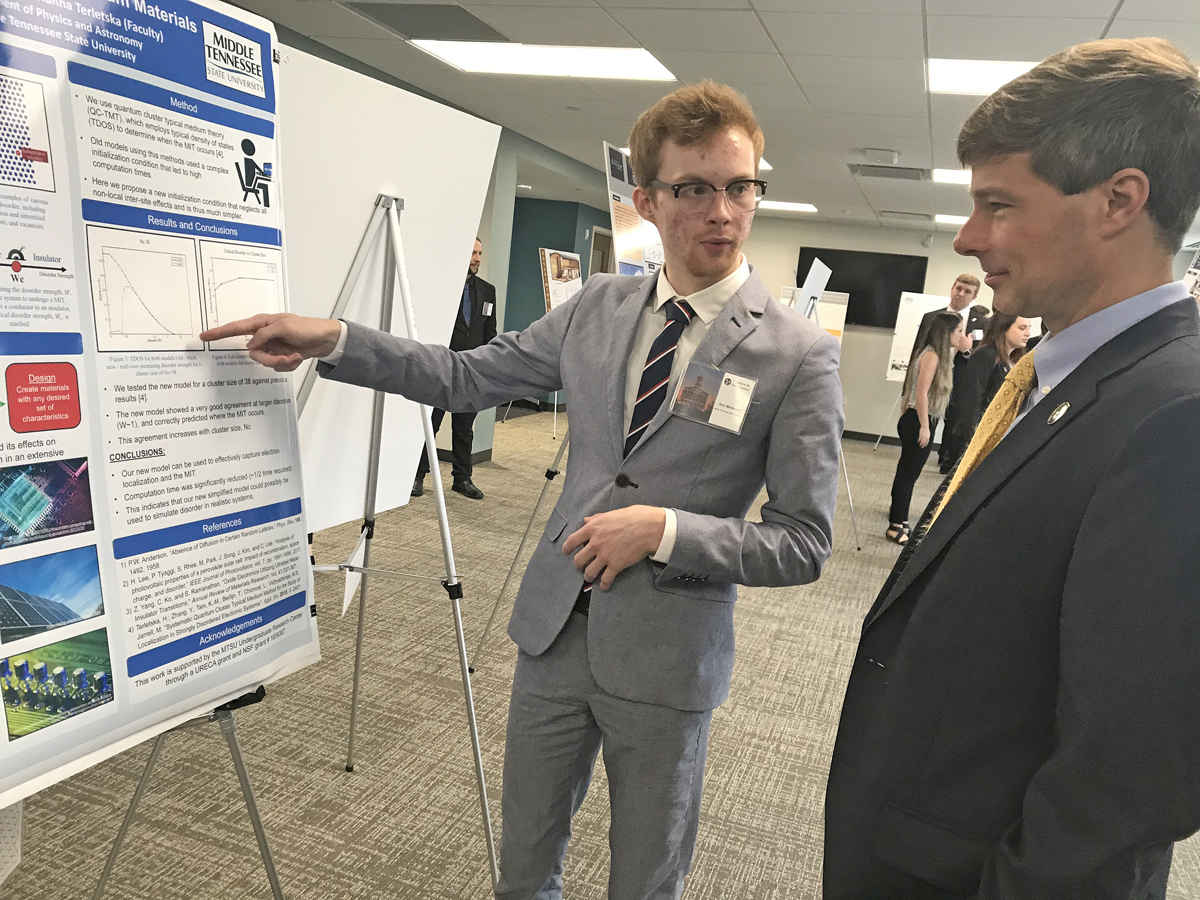 Seven MTSU students joined more than 50 others from eight state universities for the annual Posters at the Capitol in the Cordell Hull Building in Nashville, sharing their research with legislators and others.

The event was coordinated by Tennessee STEM Education Center Director Greg Rushton and his staff, and the Office of Research and Sponsored Programs.

Shutes, 21, of Nashville said Terry’s conversation with them was “life-affirming.” She wants to be a pediatrician or surgeon. 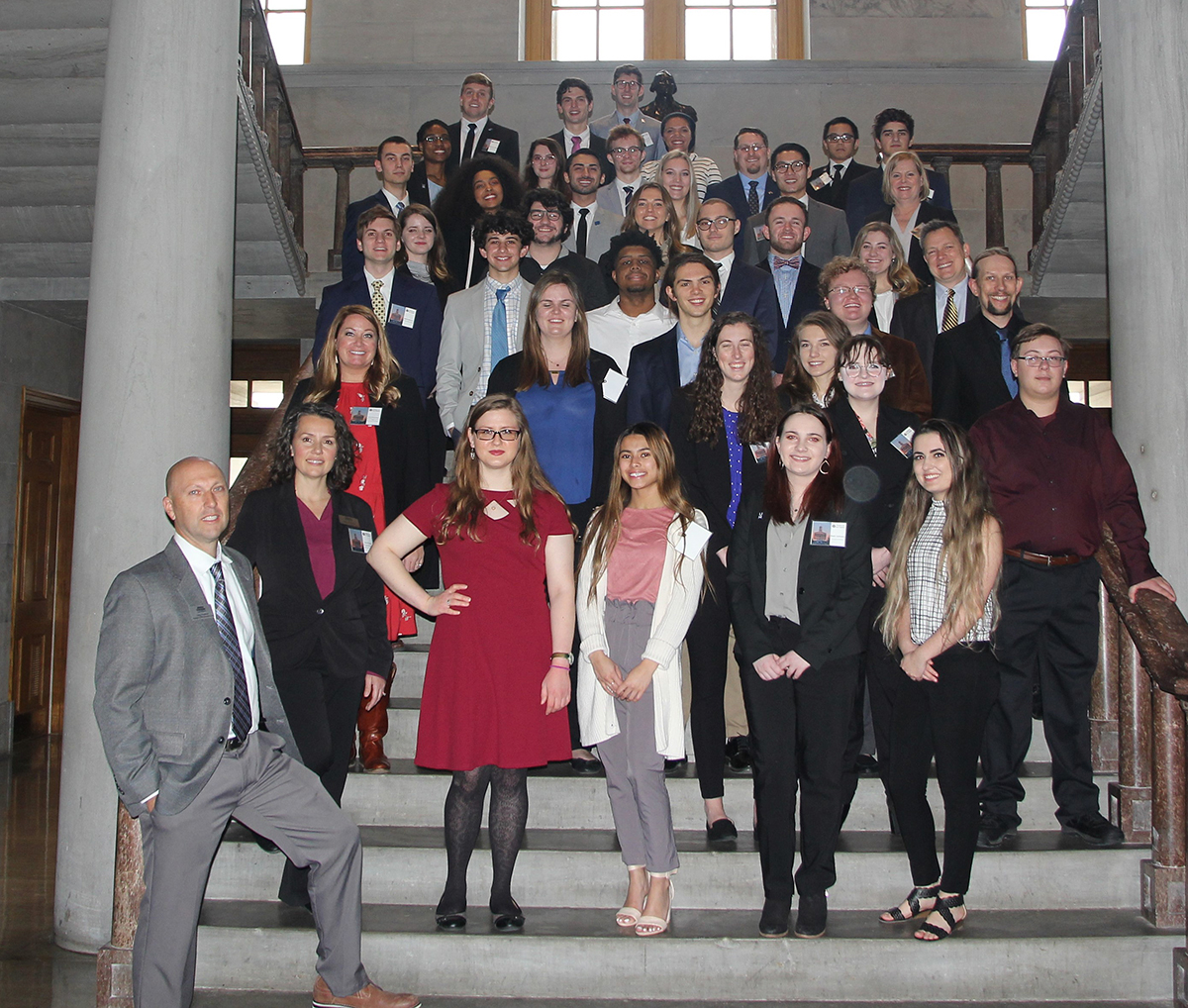 MTSU joined eight other universities from across Tennessee in bringing nearly 60 student researchers to present and meet legislators during Posters at the Capitol in Nashville, Tenn., Wednesday, Feb. 26. The effort was led by the Tennessee STEM Eduction Center. (MTSU photo by Mandy Singleton)

Stallings, 21, a senior graduating in May, also is considering the medical profession. They plan to take him up on his offer to answer follow-up questions by email.

“It felt good to receive a response like that from someone on the inside, someone who has already done it,” Shutes said. “He’s been through the field of medicine and now he’s representing the state of Tennessee.

“He inspired me,” she added. “It gives me a sense of hope and direction. Being pre-med, people think it’s going to take forever to obtain your medical degree. When you meet people like him, there is a finish line.”

MTSU finance professor Charlie Baum, a member of the state House of Representatives, also stopped by to view some of the MTSU posters and talk to students. 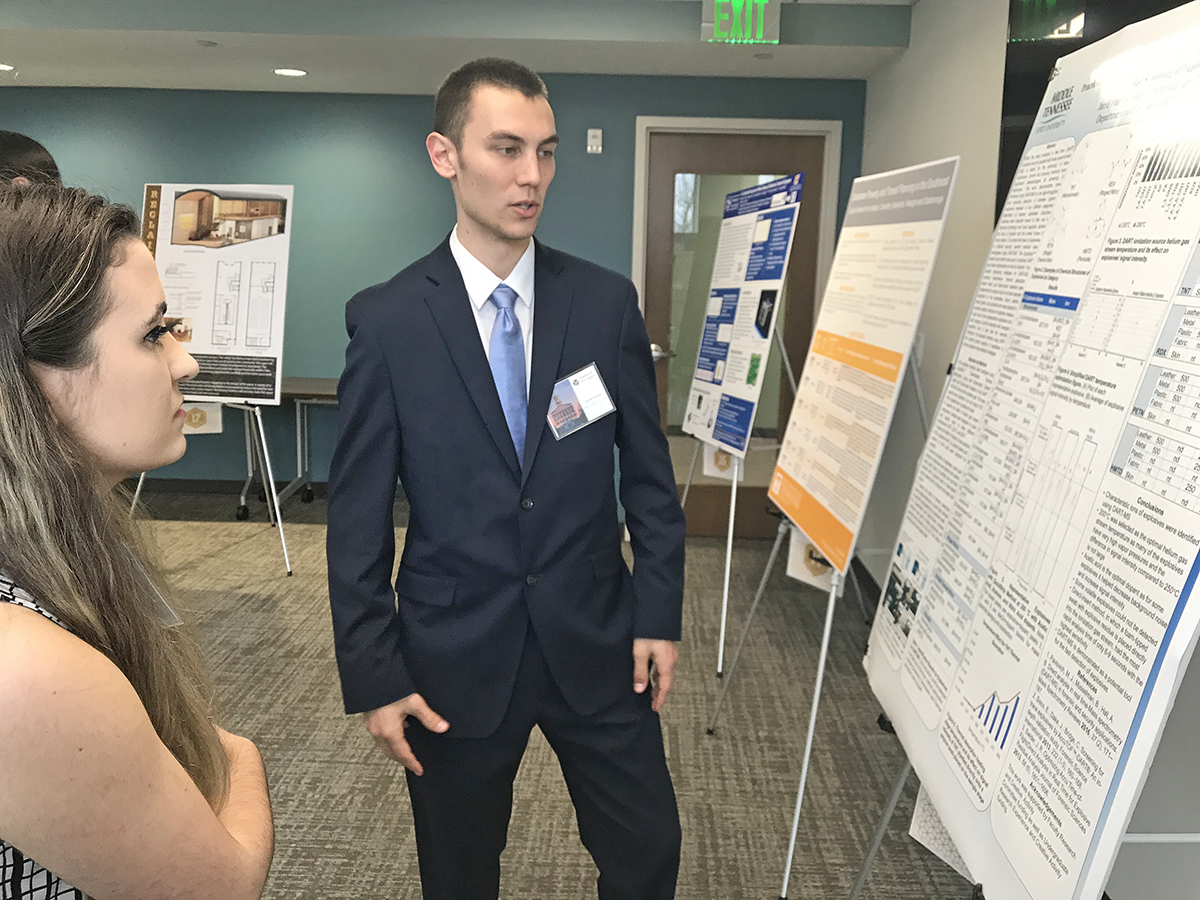 University of Memphis senior research student Serena Jones, left, listens as Jared Frazier, an MTSU sophomore chemistry and computer science major, explains his research on explosives Wednesday, Feb. 26, during the Posters at the Capitol in Nashville, Tenn. Nearly 60 students shared their research with state legislators and others. (MTSU photo by Randy Weiler)

Jared Frazier, 20, a sophomore from Spring Hill, Tennessee, with a double major in chemistry and computer science, said his study involving terrorist types of explosives could potentially help the Transportation Safety Administration.

“Our method uses mass spectrometry to screen for explosives rapidly and with more sensitivity,” said Frazier.

His work with mentor Mengliang Zhang, an assistant professor in the Department of Chemistry, began as a freshman. Frazier has moved to another research project.

Several passers-by saw Moilanen’s poster and stopped to ask about the research that the senior physics major, 22, from Crossville, Tennessee, who graduates in May, has done involving quantum materials.

• Lily Medley, a senior geosciences major from Tullahoma, Tennessee, whose study was on geology in northern Oregon. Her mentor is Department of Geosciences professor Warner Cribb.

• Kayley Stallings of Murfreesboro, a senior with a double major in biochemistry and fermentation science and double minor in business administration and university honors, who explored aspects of Kombucha tea. Her faculty mentor is School of Agriculture assistant professor Keely O’Brien.

• Lillian Beck, 20, a senior speech language pathology major from Columbia, Tennessee, whose research involved an educational aspect for preschoolers. Her mentor is assistant professor Kathryn Blankenship of the Department of Health and Human Performance.

• Dirhat Mohammed, a senior biology major from Antioch, Tennessee, whose study involves graduate teaching assistants in STEM and non-STEM areas, which include science, technology, engineering and math. His mentor is associate professor Grant Gardner of the Department of Biology. 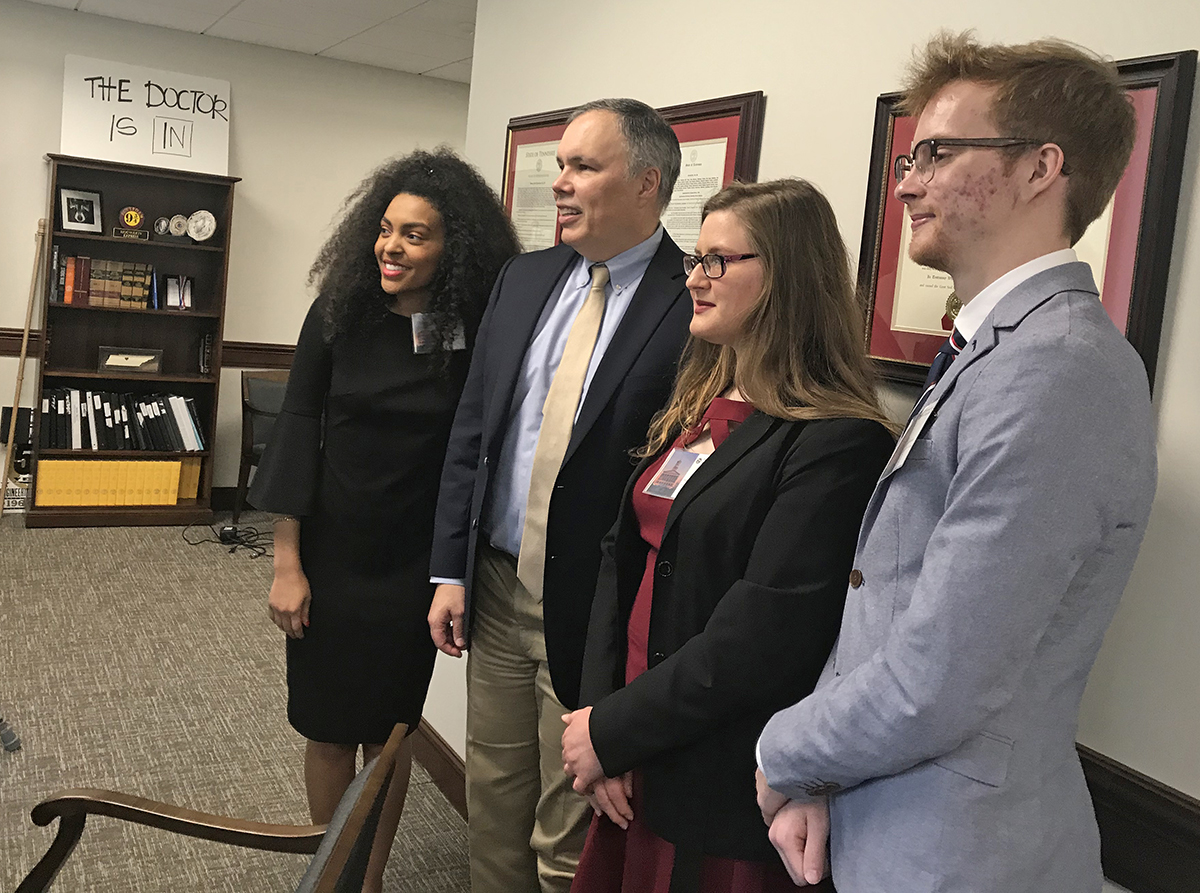 MTSU undergraduate student researchers pose for a photo with state Rep. Bryan Terry of Murfreesboro during the annual Posters at the Capitol visit Wednesday, Feb. 26, in Nashville, Tenn. From left are Tia Shutes, Kayley Stallings and Aric Moilanen. (MTSU photo by Randy Weiler) 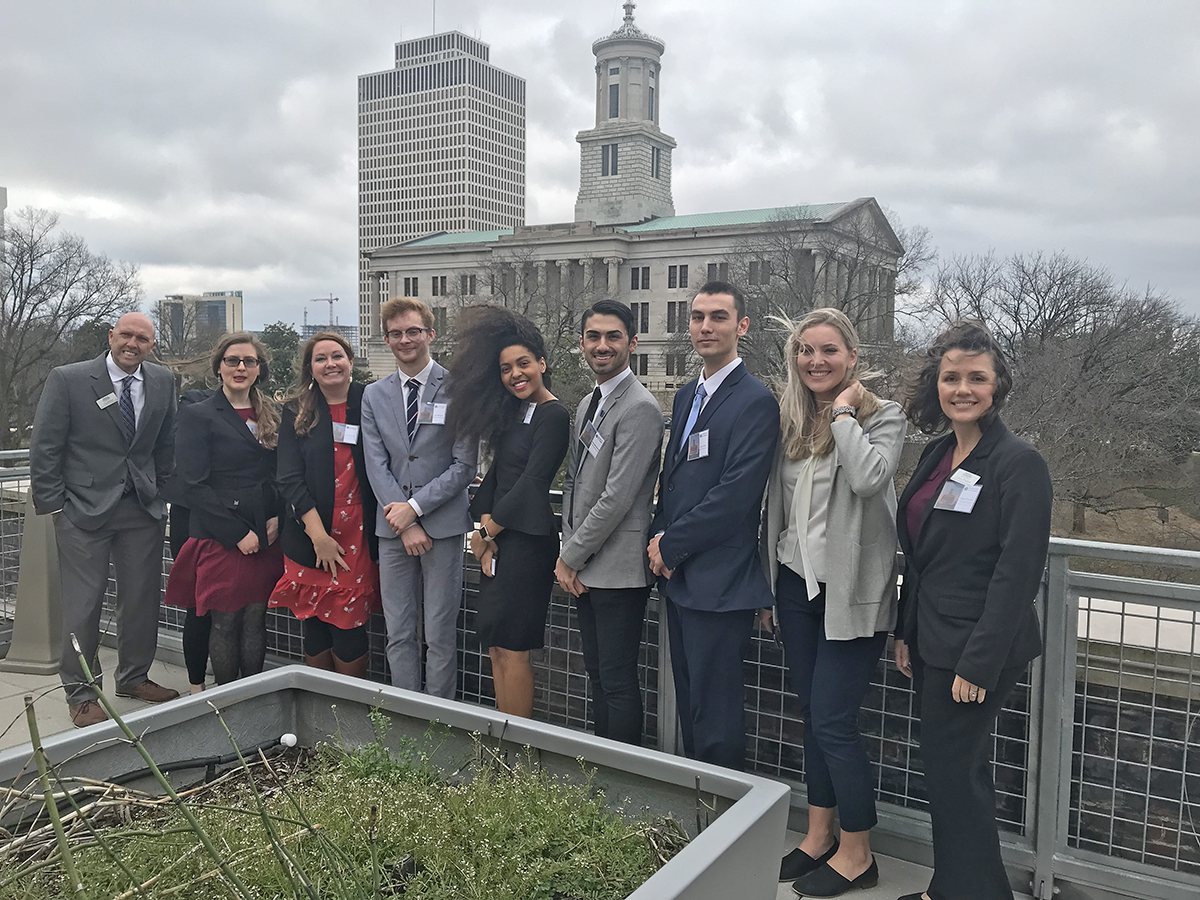