Considering how COVID-19 turned higher education upside down, you’d think 2020 would have been a bad year for the Office of Research and Sponsored Programs to launch a multidisciplinary undergraduate research project like no one at MTSU had tried before.

Then again, maybe a pandemic that forced us to reengineer our most basic routines (how we teach our kids, get our food, do our jobs, travel safely) was the perfect context for the Blue Mars Initiative. It made the project’s overarching question—How can humans make Mars habitable?—seem less theoretical, more necessary. Perhaps even urgent. 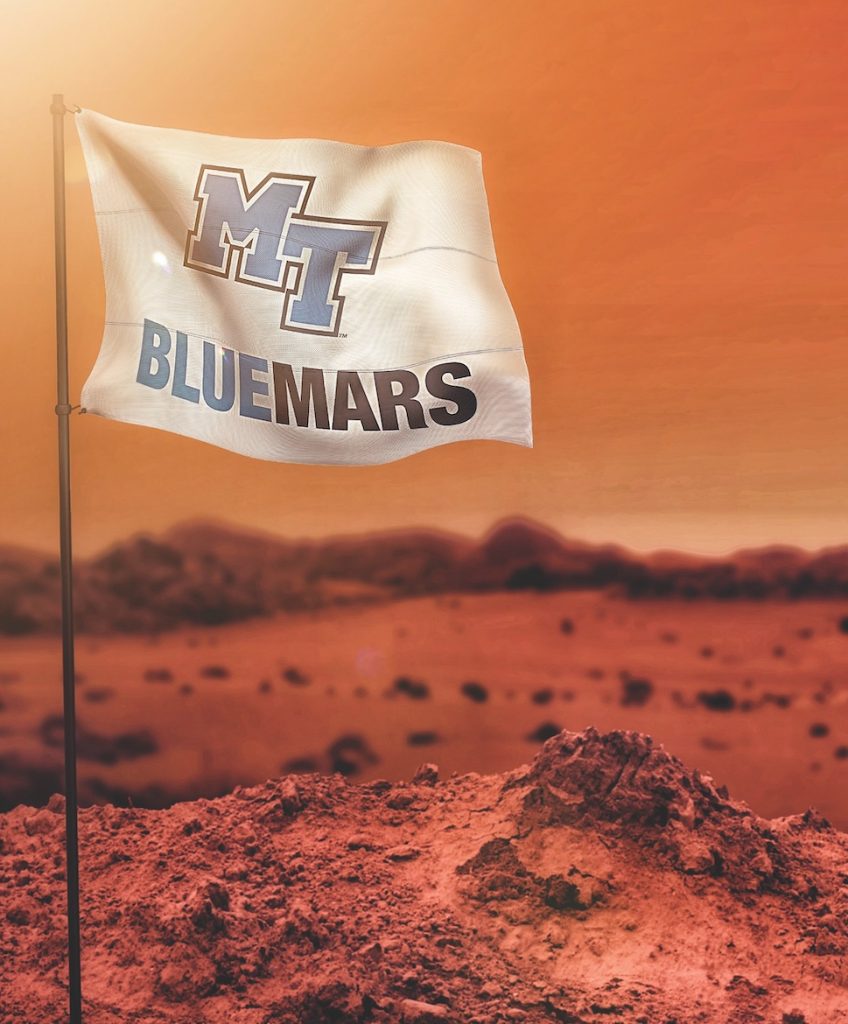 Terraforming (literally, “Earth-shaping”) of a planet, moon, or other body is the hypothetical process of deliberately modifying its atmosphere, temperature, surface topography, or ecology to be similar to those of Earth to make it habitable by humans. Source: Webster’s New World College Dictionary (Photo illustration by Brian Evans)

The fact that David Butler came up with the idea in 2017, back when our Earthly ways of doing things appeared to be working pretty well, makes him seem prescient now. But thinking ahead is part of his job as vice provost of research.

“My goal is to take MTSU from where it is now as a research institution and into the future in a very aggressive way in terms of grant funding,” he said. “People who fund grants fund solid, innovative, creative, forward-looking ideas that have social relevance.”

Butler chose the topic, based loosely on author Kim Stanley Robinson’s trilogy about terraforming and colonizing Mars, because it touches every academic discipline—not only science, technology, engineering, and math (STEM), but also language, art, communication, business, and government.

“The more you explore Mars and humanity, the more you understand Earth and humanity. It’s an interesting byproduct,” he said. “Every time we think about a human being on Mars, whether they’re eating, sleeping, partying, reproducing, creating art, sitting in jail, whatever it is, you think about how that’s different on Earth, and it makes you look at Earth and our social systems—our engineered systems, our type of humanity or our lack thereof—in a new way. Because you have to question everything.”

Butler originally geared the Blue Mars Initiative for faculty members and doctoral students, but most of them were already committed to multiyear research. So in late 2019, he opened the project to undergraduates as part of MTSU’s Undergraduate Research Experience and Creative Activity (URECA) program, which offers grants  for extracurricular scholarship. 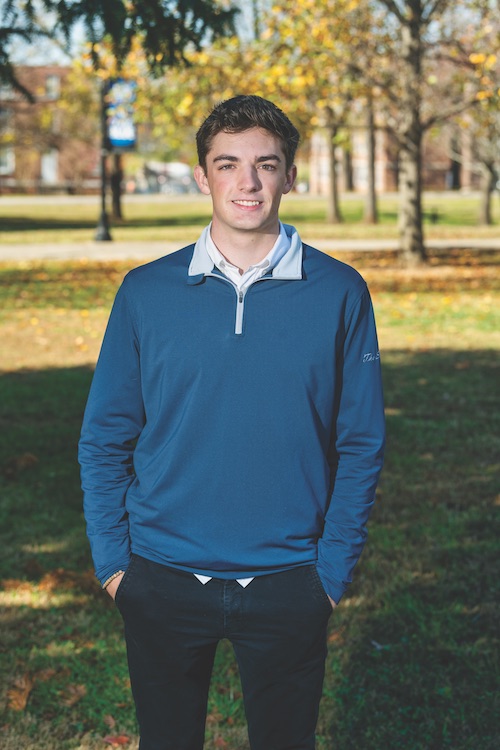 “What I realized is that those who are the most enthusiastic and would bring probably the most innovative ideas to bear in a more creative, forward-thinking way were undergraduates,” he said.

The first adventurer was then-freshman Luke Gormsen, an Aerospace Technology major from Brentwood. Gormsen says he knew coming into college that he needed to do research, “but I had no idea what that was going to look like or where I needed to start.”

He contacted Jamie Burriss, who facilitates the URECA program, saying he wanted to do research and needed a faculty mentor. Burriss contacted Butler.

During the Spring 2020 semester, Gormsen researched the logistics related to moving terrain on Mars—specifically, how to modify the hydraulics of a Caterpillar excavator to survive space flight and Martian conditions.

Gormsen liked the idea too. “I didn’t really know what that was going to look like either, but I thought, ‘Hey, the more people the better.’ ”

He started thinking of a second project, and he picked up a second major, Physics, for good measure.

The Blue Mars URECA team had to hold its first meeting via Zoom. But that was no problem given the casual nature of their collaboration.

“We created our own assignments, and we’re working on them; but we’re more than happy to talk to each other about them and offer assistance if it’s needed, or if someone needs an extra hand in research, things like that,” said team member Katelin MacVey (’21), an Honors student from Nashville and recent graduate. 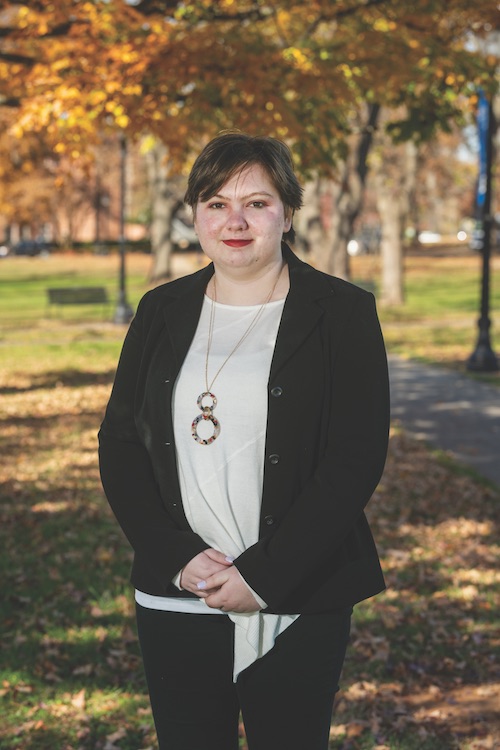 She’s been writing a novella about a three-year, six-member mission to Mars. Her primary research involves reading a dozen books, including the Robinson trilogy, geographical manuals of Mars, and an official manual for astronauts on the mental health effects of space travel.

“I’m exploring what it would be like to psychologically and psychiatrically experience that pervasive, deep blackness of space away from Earth,” she said. “We are an Earth-specific species. We’ve sent people off the planet, but they’ve always been able to see it. I’m interested in what happens when they no longer can.”

Writing fiction, particularly fantasy, was just a longtime passion for MacVey when she transferred to MTSU from community college in 2018. She’d always been a STEM kid and she enrolled as an Animal Science major. But she switched to English halfway through her junior year.

“I promised myself that if I’m going to go to college and I’m going to pay for it, I might as well do something that I enjoy,” she said. “I’m also a German and Photography minor—because where else am I going to learn these skills?”

Of the team’s recent four projects, MacVey’s is the only creative one. Her left brain’s a little rusty, she says; she plans to run the highly technical details past her teammates.

“I love space and astronomy and all that stuff,” she said, “but physics and astrophysics are way above my head.”

Quantum dots fall into the highly technical category, so we’re grateful that Jared Frazier moved along from that topic—the focus of his last URECA project, for which he won a prestigious two-year Goldwater Scholarship—to a new topic for Blue Mars.

Frazier, from Spring Hill, is a rising senior majoring in both Chemistry and Computer Science. This is his fourth URECA grant (“I’m going for the record,” he said). His goal is to use machine learning and six Martian years of atmospheric data collected by NASA’s Curiosity rover to predict the weather on the Gale crater. Weather is a critical consideration when it comes to infrastructure that requires a certain climate and temperature. 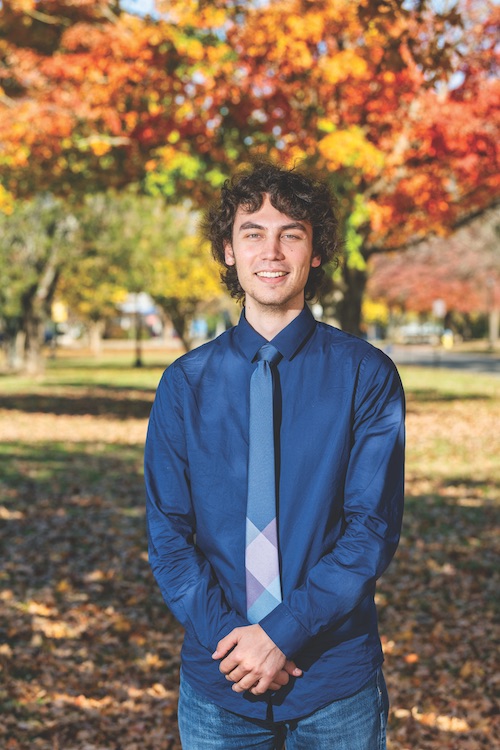 Machine learning isn’t the best way to predict the weather, Frazier says, but in the future he can apply the data analysis technique he’ll use for this URECA project to chemistry, finance, just about anything.

“It’s a transferrable skill, which is really what I was interested in, especially considering the instability of the world as it pertains to the pandemic,” he said.

Unlike quantum dots, that line of thinking is easy to understand. Frazier already saw two plum research opportunities vaporize in 2020—a fully funded summer at the Helmholtz Institute in Germany, and his backup plan, materials research at New York University in Manhattan, funded by the National Science Foundation. He needed any further opportunities to be sustainable, something he could do remotely if necessary. Blue Mars filled the bill.

“I’d heard about the Blue Mars Initiative, and I’m really into mathematics and statistics and quantitation, so I thought, ‘Okay, what can I do with that?’ ”

Frazier is also into poetry and music and theater—as in he writes poetry, plays guitar and piano, and performs, most recently in Ride the Cyclone at MTSU. In choosing a major, he made a calculation similar to MacVey’s but landed on the other side.

For the purposes of Blue Mars, he could do a lot with those subjects, too. (What is language like in isolation? How does sound transmit through Martian air?)

Suggesting that we would only do engineering and science stuff, and not write or sing or listen to music or paint or build aesthetic structures, that’s just not who we are as human beings,” Butler said.

It touches every academic discipline—not only science, technology, engineering, and math.

Human beings also are interested in making money wherever they can, including outer space. Privatization is rapidly changing the model of space travel. 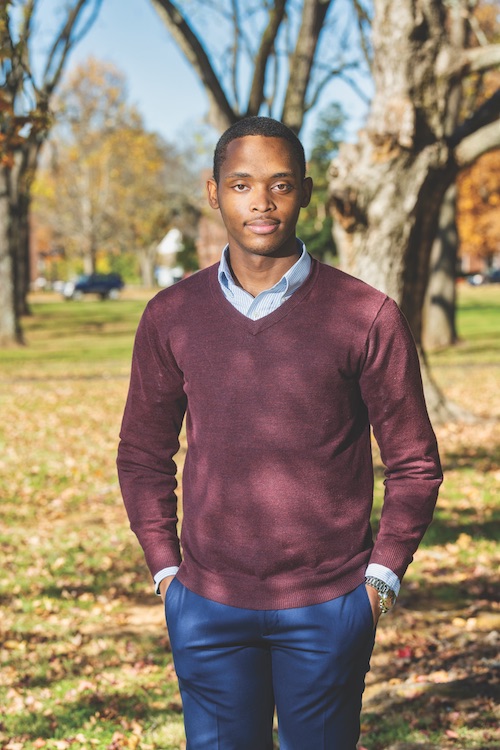 “SpaceX wants to get us to Mars by some kind of vehicle by 2024, and NASA wants to get to the moon again by 2024,” Gormsen said. “Whether either of those expectations is realistic doesn’t really matter. It shows you who’s leading at this point, which is private commercial companies.”

His Blue Mars project involves identifying Martian landing spots that would be commercially attractive. He says his list will almost certainly look different than the list of ideal landing spots NASA put together 10 years ago.

“NASA doesn’t have the threat of going bankrupt if things don’t pan out. They tend to do things a lot more slowly and tediously, with a lot of testing,” Gormsen said. “And then what they want when they get to Mars can look different from what a commercial company wants. NASA might choose an area with a lot of geology spots that they want to look at. Well, a space company that’s worried about turning a profit, somehow someway, is not going to be intrigued by that.

For rising senior Winton Cooper, nothing about Blue Mars is purely academic. Climate change is already ravaging his native Bahamas with increasingly intense hurricanes. The commonwealth is projected to be 80% underwater within 100 years.

For Bahamians, the concept of having to abandon home for an alien landscape is not theoretical. Neither is the Sisyphean challenge of pushing back against a hostile environment.

When Cooper describes his URECA project, it feels personal:

“My specific focus is whether it would be feasible for scientists and future colonists to go to Mars and attempt to terraform, or make Mars lifelike, when space weather events continue to beat Mars and basically dial back the clock on any progress made.”

It’s a STEM project, although it sounds rhetorical. To gauge the feasibility of terraforming, he’s analyzing seven years of spacecraft data and professional research on specific space weather events.

The concept of having to abandon home for an alien landscape is not theoretical.

And Cooper’s a STEM guy, or at least that’s how he envisioned himself when he came to MTSU to study Aerospace Technology. But during orientation, he switched to Environmental Science. That’s where he found his passion—and a lot of unanswered questions.

“What does the world do when a country disappears? What happens to a sovereign people when their land is made uninhabitable because of the environment? What does environmental refugeeism look like 50 years from now?” 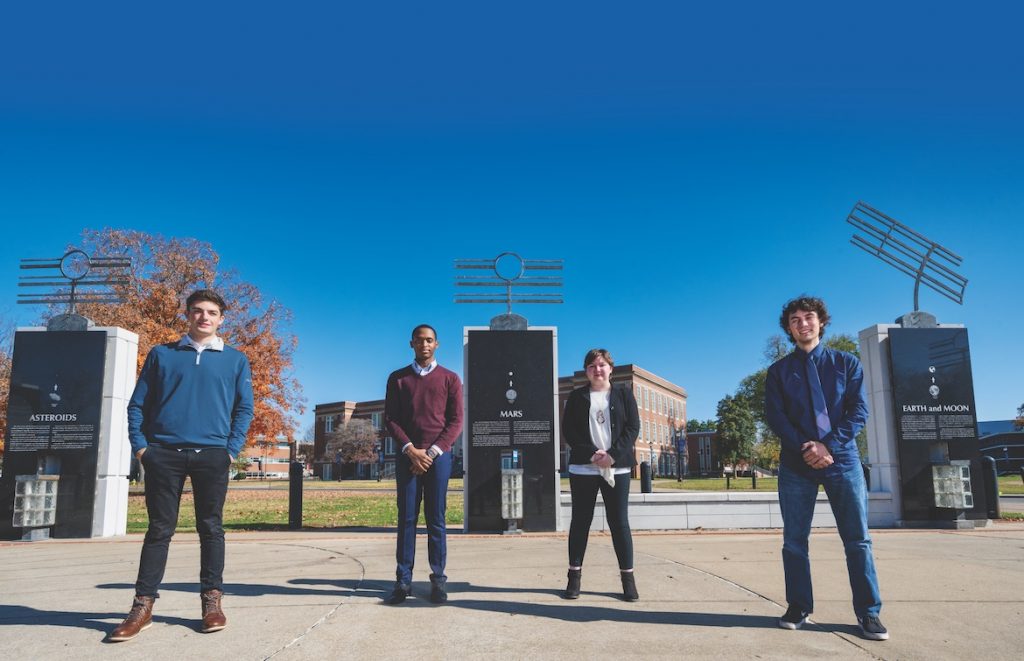 “We need real change—yesterday,” Cooper said. “And the only things that drive actionable change are grassroots campaigning, nonprofit organizations, and policymaking.”

Cooper got his first taste of policymaking in high school, as a member of the Bahamas Youth Parliament. He has continued down that path in college, serving on five University committees and as incoming president and former executive vice president of MTSU’s Student Government Association.

He wants to experience as much as he can at MTSU and then travel abroad, always cognizant of his mission to take what he learns back to the Bahamas. No matter how far they go, travelers carry their home base with them.