Kaleb Stone transfers into a l.. 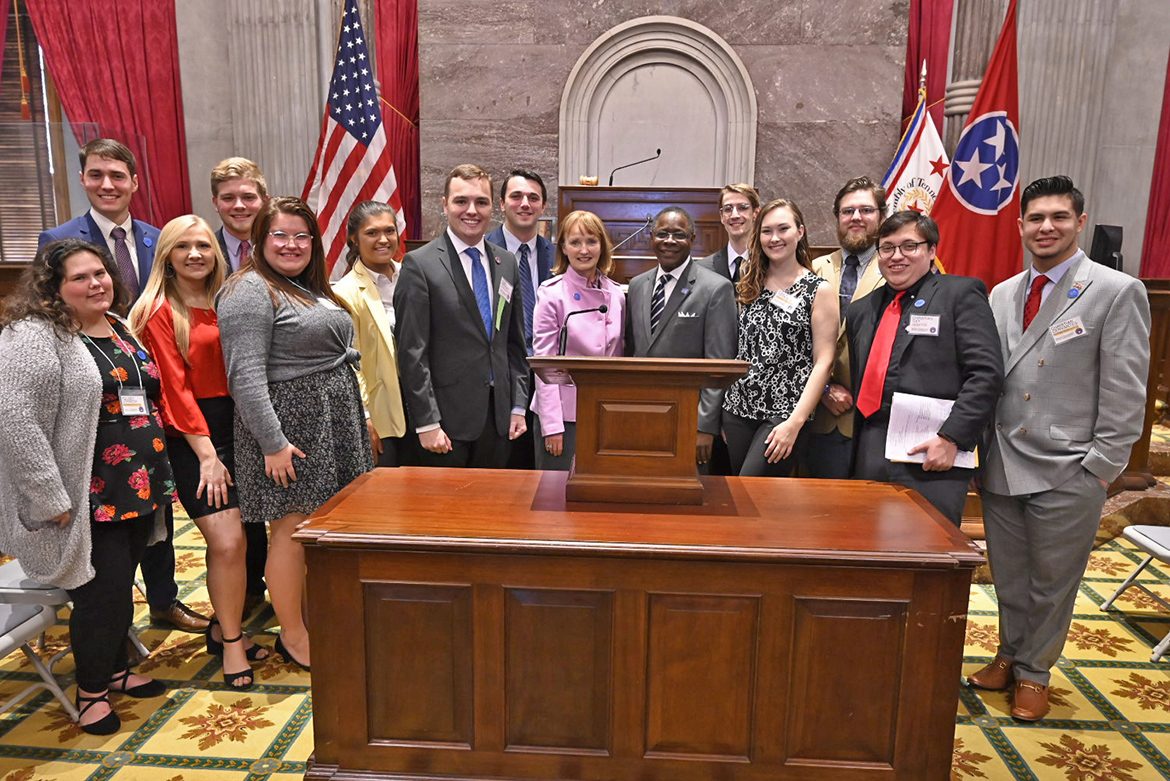 NASHVILLE, Tenn. — Middle Tennessee State University President Sidney A. McPhee challenged delegates to this year’s Tennessee Intercollegiate State Legislature on Thursday, Nov. 21, to be bold in their leadership journeys — and not be afraid to fail in the pursuit of their goals.

McPhee and former Tennessee House Speaker Beth Harwell, now a distinguished visiting professor at MTSU, represented the university at Thursday’s opening session of TISL, which convened in the House chamber of the State Capitol. 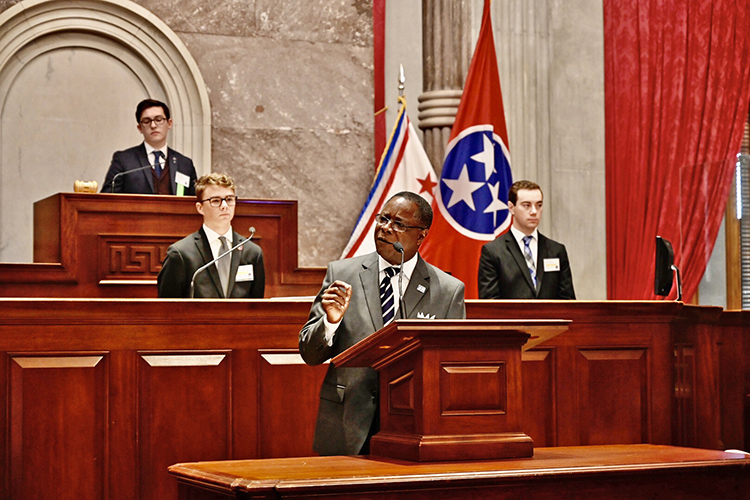 MTSU President Sidney A. McPhee delivers the keynote address at Thursday’s opening session of the 2019 Tennessee Intercollegiate State Legislature on the floor of the House chamber at the State Capitol in Nashville, Tenn. (MTSU photo by Andrew Oppmann)

MTSU, along with the University of Tennessee-Knoxville, Belmont University and Lipscomb University, sponsored this year’s four-day TISL session, which attracts student delegations from almost every public and private college and university across the state.

Quoting from John Gardner, who served as President Lyndon Johnson’s secretary of Health, Education and Welfare and was the architect of many ambitious “Great Society” programs, McPhee said the “fear of failure” was “a powerful obstacle to growth.”

“Babies learn at a truly phenomenal rate — but they also experience a shattering number of failures,” he said. “But they aren’t bothered it. They simply try, then try again.

“If you want to keep on learning, you must keep on risking failure — all your life. It’s a simple as that,” McPhee told the students crowded in the House chamber. “So, keep trying. Don’t be afraid to fail. Be bold this weekend.”

The president also reminded TISL participants that they were custodians and caretakers of TISL’s legacy of learning and service.

“You’ll hold this duty for a short period of time, just this weekend,” he said. “And through your work here, you’ll move forward the reputation and history of this institution and ready it for the next custodians who will follow you.” 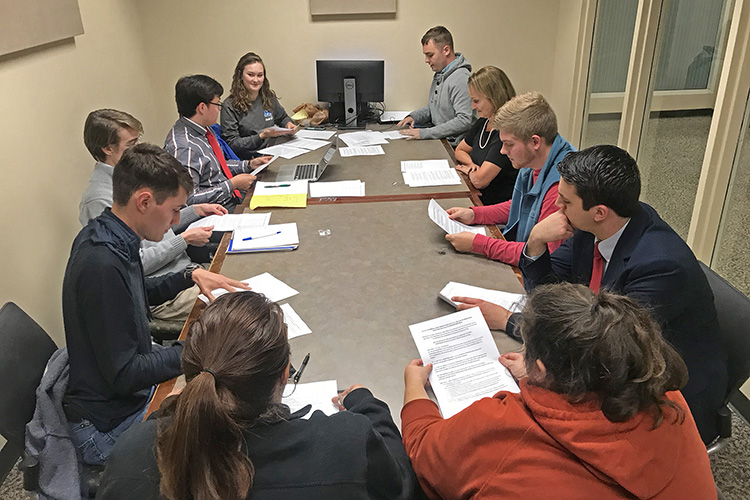 Beth Harwell, right side, second from top, former speaker of the Tennessee House of Representatives and now a visiting distinguished professor at MTSU, critiqued bills that MTSU students will present at this year’s Tennessee Intercollegiate State Legislature session in Nashville. (MTSU photo by Andrew Oppmann)

McPhee thanked Harwell for serving as mentor to MTSU’s delegation. She met with students earlier this week to critique and mentor their strategies in drafting bills for the mock legislative session. TISL met in the House and Senate chambers through Sunday as part of the annual event.

He also proudly pointed out that MTSU’s TISL delegation, led by junior Emily Oppmann of Murfreesboro, again was one of the largest at the assembly. The president also thanked senior Kobe Hermann of Chattanooga for his service as the organization’s treasurer.

MTSU’s delegation was honored Sunday as the best overall in this year’s assembly, a selection based on quality and level of participation in debates, quality of bills presented, number of participants in different branches of TISL and number of people elected into office. And senior political science/pre-law major Jackson Taylor of Brentwood was selected TISL’s best representative for the assembly.

Two MTSU students were elected to leadership posts for next year’s assembly: Sophomore Preston George, a political science/pre-law major from Mt. Juliet, Tennessee, will be lieutenant governor and speaker of the Senate and senior Gabriel Shipley, a music industry major from Chattanooga, will be lobbying director.

MTSU’s participation, a project of its Student Government Association, included sponsorship of TISL’s Tri-Star Social, the annual evening kickoff event for the assembly.

McPhee said he was “honored to be asked to represent all of our state’s college and university presidents in welcoming you to this year’s session.”

“On behalf of my fellow presidents, let me congratulate you on your accomplishments that brought you to TISL and your willingness to engage in this remarkable activity,” he said. 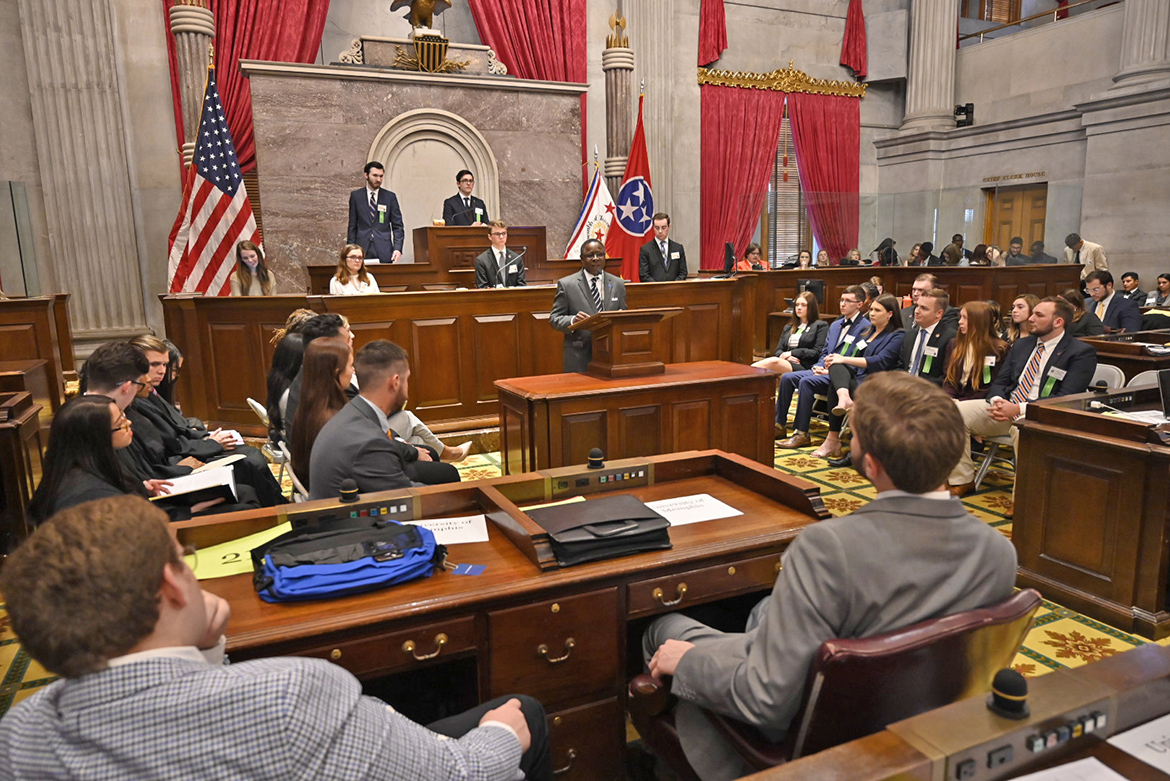 MTSU President Sidney A. McPhee delivers the keynote address at Thursday’s opening session of the 2019 Tennessee Intercollegiate State Legislature on the floor of the House chamber at the State Capitol in Nashville, Tenn. (MTSU photo by Andrew Oppmann) 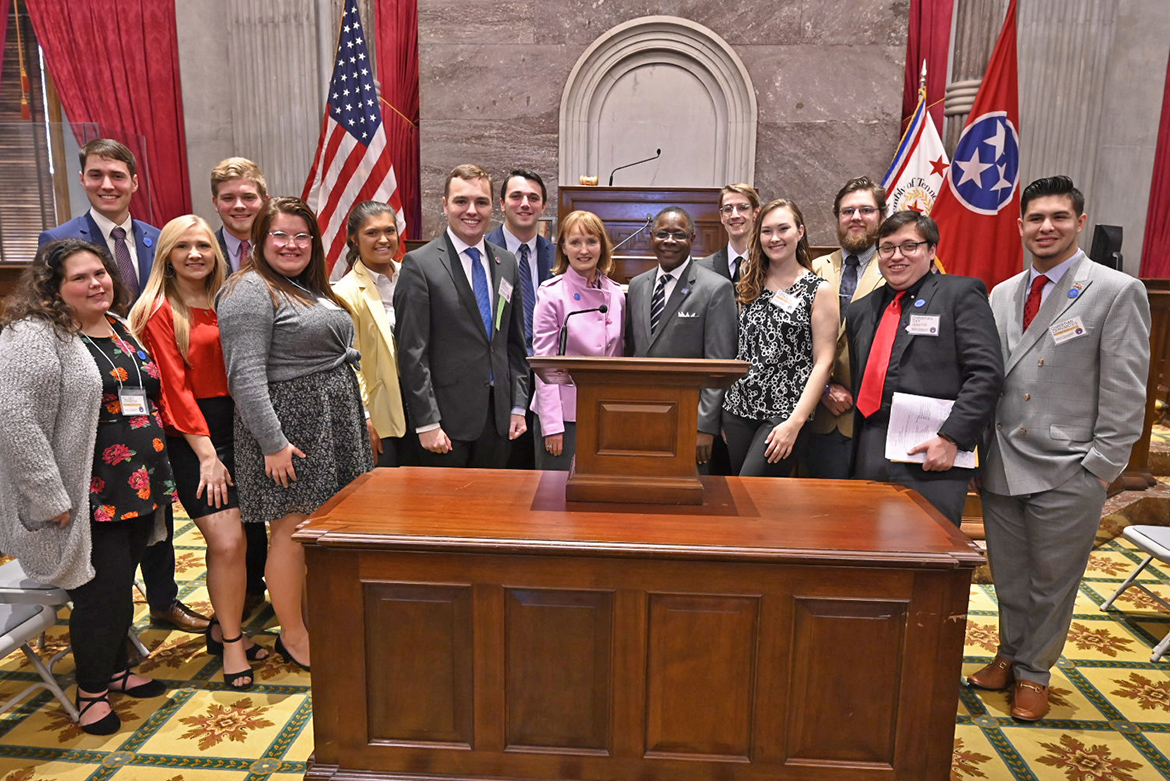