‘MTSU On the Record’ inspects stock market performance through tweets 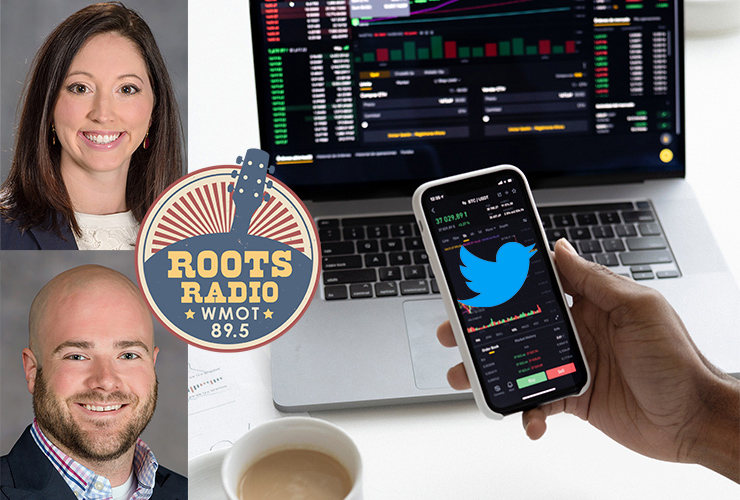 Drs. Sara Shirley, top left, and Jeffrey Stark, assistant professors of economics and finance, are guests on the Aug. 31 edition and Sept. 5 rebroadcast of the “MTSU On the Record” radio program, which airs 9:30 to 10 p.m. Tuesdays and 6-6:30 a.m. Sundays on WMOT-FM Roots Radio 89.5 and www.wmot.org. (Laptop/smart phone photo by Anna Nekrashevich/Pexels)

The impact of tweeting on the buying and selling of stock was the focus of the next “MTSU On the Record” radio program.

Shirley and Stark’s study, co-authored with a colleague from the University of Texas at Arlington, examines more than 21 million company-specific tweets over the five-year period from 2011 to 2015.

The scholars discovered that information rising from Twitter without concurrence from other media results in temporary share price spikes and reversals, while more lasting and substantive actions result when the social media platform acts as a way to spread information from other sources.

“I don’t know if it’s necessarily that it’s confirming that it’s true information or just sharing it faster,” Shirley said. “But it definitely is helping compound the spread of that information.”

They also found that Twitter influences stock trading, especially among small securities traded mostly by retail investors, who are average citizens without specialized professional knowledge of the markets. However, Stark said he doesn’t think Twitter will have a game-changing impact on the financial world.

“I don’t think so, not unless something happens where Twitter just explodes in popularity beyond what it already has,” Stark said. “I just don’t see that being the case.”