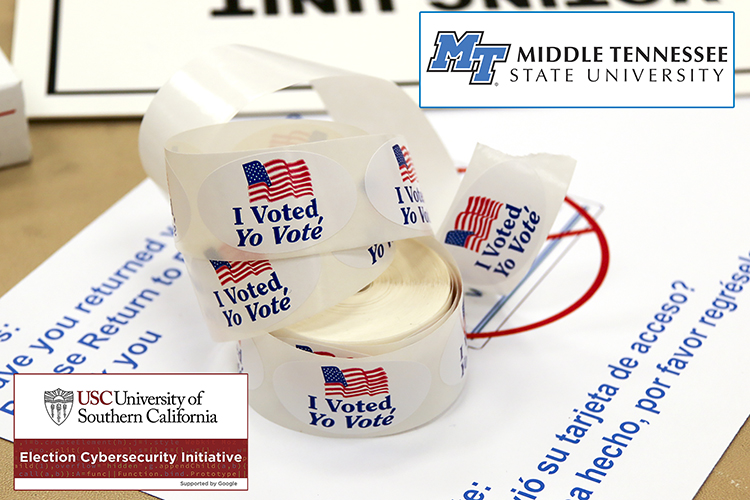 MTSU is joining a national nonpartisan effort to keep U.S. elections secure this Thursday, Sept. 10, by serving as the Tennessee university partner for a virtual public workshop on election cybersecurity and disinformation campaigns.

Click on the logo to register for the Tennessee election security workshop.

The virtual workshop, scheduled to begin at 1:30 p.m. CDT Sept. 10, is one of 50 being conducted by the University of Southern California’s Election Security Initiative before the Nov. 3 elections.

More information, plus a link to register for the free workshop, is available here.

Organizers for the USC Election Security and Information Project are providing training in each state for election officials, campaign staffers, elected officials, candidates and IT professionals.

They’re also encouraging the public to join the sessions.

Public- and private-sector election and cybersecurity experts and research and academic specialists will lead discussions on cybersafety, disinformation and misinformation, and crisis communication.

Guest speakers and participants in Thursday’s Tennessee event include:

• Mary A. Evins, professor of history and coordinator for the MTSU chapter of the American Democracy Project.
• Ken Paulson, director of the Free Speech Center at MTSU and a professor in the Department of Recording Industry.
• Gale Jones Carson, vice president for the NAACP Memphis Branch.
• Scott Golden, chairman of the Tennessee Republican Party.
• Hendrell Remus, state executive committeeman for the Tennessee Democratic Party.
• David Plazas, director of opinion and engagement at The Tennessean.

“The integrity of the American electoral system is the firm basis of our cherished way of life. Our government of the people, by the people, and for the people presumes American popular sovereignty — only American,” Evins said.

“And yet, ‘election integrity’ is being used to cast doubt on the honorable intentions of American voters themselves. As U.S. intelligence confirms, outside interference is the genuine threat to all of us. The vote must be protected for the American people, not from the American people.”

“Freedom of speech and freedom of the press are critical to our democracy because they give citizens the information they need to assess candidates before casting their ballots,” he said.

“But these First Amendment freedoms are for naught if in the end, election results are in any way suspect. Protecting our elections from external forces should be paramount.”

The USC group began working to protect America’s elections in the wake of U.S. intelligence officials’ discoveries that Russia and other countries, as well as organizations and individuals, have been trying to hack election websites since 2016.

“Trying to change the election results (via hacking), because the U.S. is so decentralized, is pretty hard to do. You invest a lot of resources and you may or may not be successful,” said Adam Clayton Powell III, the initiative’s executive director, on the Sept. 2 edition of the American Security Project podcast “Flashpoint.”

“The bigger return on investment is … disinformation, trying to discredit the election itself, trying to reduce faith in democracy. Russia is doing this everywhere, in democracies all over the world.”

They launched virtual training sessions in May in Delaware and have already completed training in 41 states. Tennessee’s workshop is their 42nd.

Powell said in the “Flashpoint” podcast that election security risks are multiplying so rapidly that organizers are warning officials that “we have to prepare for this in terms of who’s not at risk, the threat front is so broad now.”

“Somebody at (the Department of) Homeland Security said they were thinking of reviving the old Smokey the Bear (ad) campaign in September,” he continued with a resigned chuckle.

MTSU’s American Democracy Project, which Evins has coordinated on campus since the national organization launched in 2003, promotes increased civic engagement and awareness among students.

Its recent efforts have focused on voter registration, participation and education, including helping add nearly 400 new voters to the Rutherford County rolls in September 2019 alone and winning the Tennessee College Voter Registration Competition for that work.

“As educators within our state’s great system of higher education, we especially support this nation’s youngest voters, the students of our university,” Evins said. “We advocate for their voices to be heard and for their confidence in our elections to strengthen their American pride and citizenship.

More information about the American Democracy Project at MTSU, and voting information for every Tennessean, is available at http://mtsu.edu/vote.

Its resources are open to the public anytime at http://freespeech.center.

Andrew Lickman, right, a freshman computer science major from Lynn Haven, Florida, registers to vote Sept. 3 at a tent on the south side of MTSU’s Peck Hall while alumna Lee Anne Carmack, a volunteer with the Murfreesboro chapter of the American Association of University Women, handles paperwork and provides information. MTSU is the Tennessee university partner for a Sept. 10 free virtual public workshop on election cybersecurity and disinformation campaigns sponsored by the University of Southern California’s Election Security Initiative. (MTSU photo by Gina K. Logue)